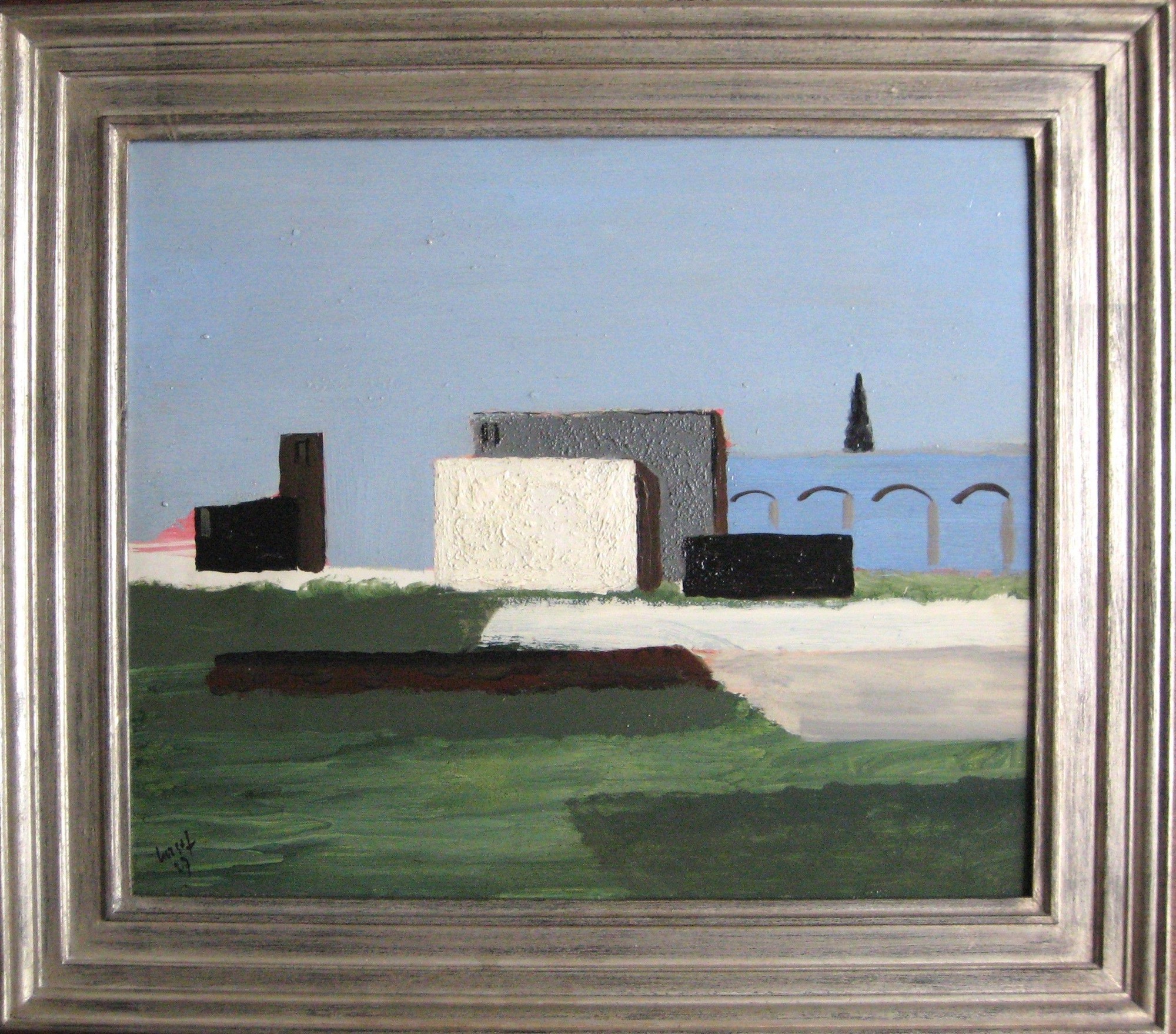 Oil on panel, signed and dated 27

Jean Lurçat was a most interesting and influential artist and designer of tapestries, ceramics, and carpets, who was born in Bruyères in the Vosges region of France on 1st July 1892.

He undertook his artistic training initially in Nancy under the instruction of the painter, sculptor, stage designer and print maker Victor Prouvé and then, after moving to Paris in 1912, at L'École des Beaux-Arts and then at L'Académie Colorassi under Bernard Naudin who was a designer, painter and engraver. Whilst in Paris at this time he moved in the circles of Ludwig Marcoussis and Picasso and consequently his earliest influences were those of Cubism.

In 1913, Lurçat became interested in the problems inherent in wall painting and undertook some frescos but he was also involved in illustration work. He provided the artwork for Philippe Soupault's "A la Dérive" and "Corps Perdu" and for Charles-Albert Cingria's "Les Limbes". "Toupies et Baroques" was a work entirely written and illustrated by Lurçat himself. He also founded his own review in 1912, Les Feuilles de Mai, which included contributions by a number of people as well as Lurçat himself in which he investigated the positive effect of art on life.

The advent of the First World War resulted in the young artist being mobilised for the defence of his country. He saw active service in the infantry, was wounded and recuperated at the home of his parents in Sens, but his ardent pacifism and the publication of some of his poems and articles in foreign journals, caused him to be imprisoned for a brief period. With the cessation of hostilities, he was free to travel and he took the opportunity to visit Austria, Germany, Sicily and Spain in 1919, the Sahara and Spain again in 1924, Italy, Greece and Asia Minor in 1927, Spain 1928, United States, Greece and the Sahara in 1929 and between 1933 and 1934, he revisited the USA and also went to Morocco.

His first exhibition was staged in Zurich in 1917 and showed the impact of Cubism on his development, particularly the work of Georges Braque. Some of this early work was later reproduced as tapestries by the Hennebert workshops in Toulon. In 1920 he travelled to Munich and Berlin and the influences of those two cities steered him in the direction of Expressionism.

Lurcat had, from early in his career, also been closely linked with the Surrealist Movement and this had been a strong influence on the work which he had exhibited at Le Salon des Indépendants and Le Salon des Tuileries from 1920. His paintings show how he managed to conjoin the primary influences of Cubism, Expressionism and Surrealism to form a most individual style.

However as a consequence of his travels in Europe, North Africa and America, the strong impressions that the desert landscapes in particular had made on him, supplanted to a certain extent the dominance of his Surrealist leanings. From henceforward, his paintings often depict arid and rocky landscapes with the placing of ruined buildings giving the painting its rhythm. These works portray a landscape of almost oppressive solitude where life is scarce and hard.

From 1930, the sea started to become a theme of his paintings inspired apparently by the view of a gantry in the naval dockyard in Arachon, and latterly by the coastline at Cap Ferrat where he stayed for a while. He was painting at this time in gouache but was also producing coloured lithographs, particularly for illustrations. André de Richaud's "Création du Monde" and "Géographie Animale" were done in 1948 and "Le Monde Merveileux des Insectes" after J H Fabré and " Le Bestiaire Fabuleux" based on the poems of Patrice de la Tour du Pin.

However, in parallel with this work, his grand personal design of revitalising the great days of French tapestries of the golden age of the 17th century, but in a more poetic, contemporary manner, was taking up much of his creative energy. Increasingly he devoted his time to realise this dream and to some extent, Lurcat is primarily remembered for this later stage of his career. His tapestries continued his approach to design and colour that he had explored in his painting. Though a free and direct design, he wished to define the poetic depiction of his universe animated by flamboyant cockerels with multicoloured sunbeams penetrating autumnal forest floors or celestial arches reaching down to splintered Christmas trees.

Some of his exhibited tapestries were on an immense scale: one for La Musée du Vin in Beaune measured fifty square meters, another for Le Palais de l'Europe in Strasbourg was seventy square meters and the extraordinary Le Chant du Monde, made between 1957 and 1964 and exhibited in several museums, was five hundred square meters.

Aline Barnsdall 1882-1946, was born in Pennsylvania and was the heiress to a fortune left to her by her father T N "Ted" Barnsdall. She had travelled extensively, particularly in Europe, with her father and developed her own fiercely independent, radical and feminist opinions and interests and her espousal of various causes allegedly resulted in her being under surveillance by the FBI for a number of years.

She moved to Chicago and through her involvement with avant-garde theatre there, met Frank Lloyd Wright. When she moved to Los Angeles, she persuaded Wright to come with her, commissioning him to design and build a major arts and theatre project on Olive Hill which was never completed. However he did manage to finish Hollyhock House, albeit without being able to devote all his time to the project and the ensuing spiraling costs of construction and maintenance.

This was to be her own home although she had become disillusioned with the process of its creation and never actually lived in it, donating it and its surrounding land to the city in 1927. This is now known as Barnsdall Art Park. The result of bringing Wright to California has earned her the epithet "mother of modern American architecture".

This painting by Jean Lurçat, which was in her personal collection, was donated by her to the Los Angeles County Museum around 1944, shortly before her death.