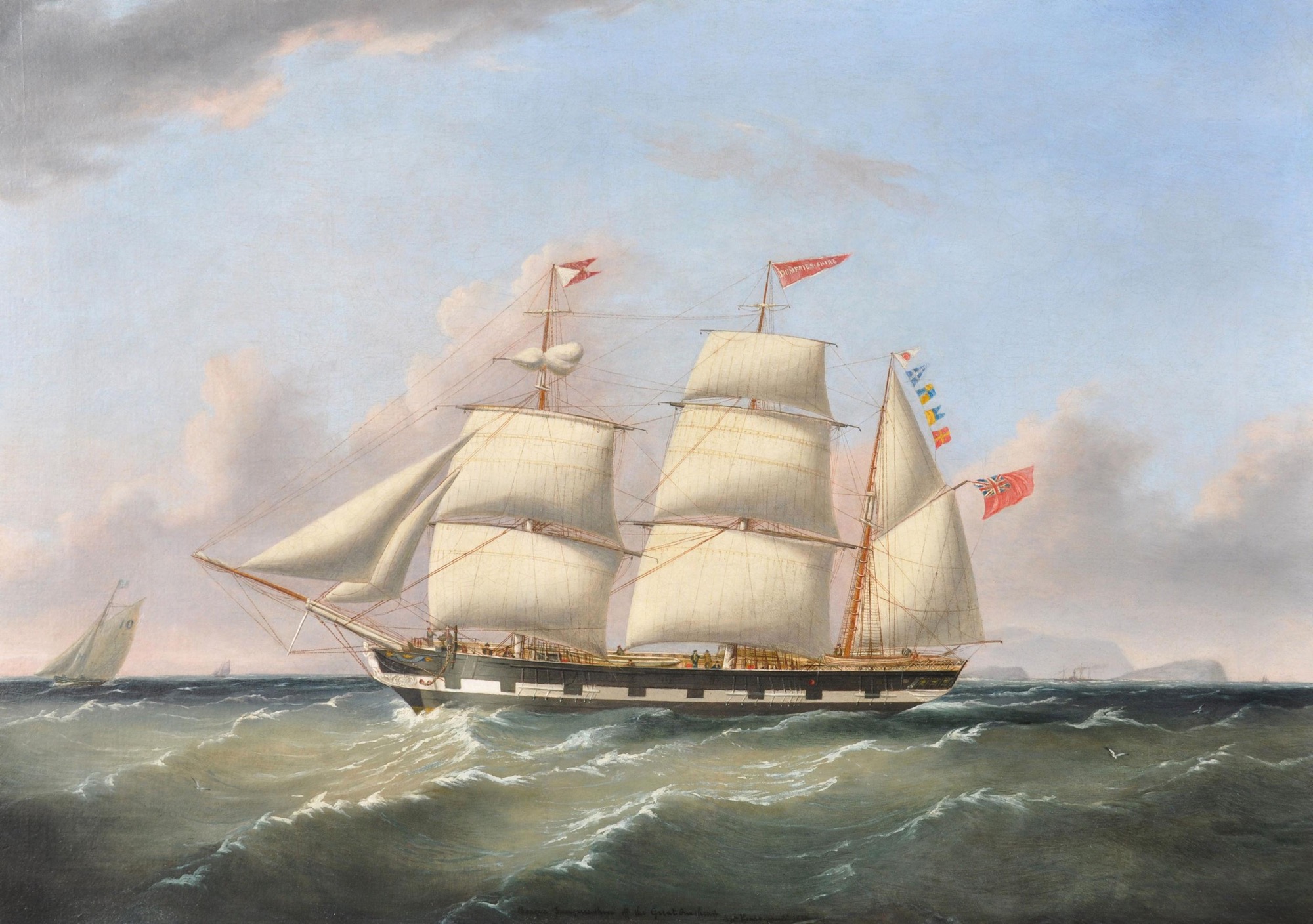 The former Curator of Oil Paintings at the National Maritime Museum, E H H Archibald, says of Joseph Heard in his Dictionary of Sea Painters in Europe and America that "…with Samuel Walters he must stand as the top-ranking Liverpool ship portraitist of the 19th century." He would have known the artist's work well as the National Maritime Museum has eleven paintings by Heard in its collection.

Joseph Heard was born on 7th March 1799 in Egremont near Whitehaven in Cumberland. His father, also Joseph, was a saddler and it is believed that the aspirant painter received some artistic training from John Clementson who was a local portrait painter. Joseph had a brother Isaac who painted portraits. It is possible that Joseph came across the work of H Collins who was a ship portraitist from the area as well as the important marine painter Robert Salmon who was from Whitehaven also.

However, little is known of his background apart from that he went to London in the mid 1820s but his stay was brief for he exhibited a portrait in a Whitehaven in 1826 and then at the Carlisle Academy in 1827. His professional career started in Whitehaven until he moved to Liverpool in 1834 together with his brother and they shared a studio, Joseph working on marines and Isaac on human portraits. It was there that he established himself as an eminent portrayer of the ships that plied their trade through Britain's second most important Empire port. There were many wealthy ship owners and captains eager to have their prized vessels portrayed on canvas and not necessarily off the coast of Liverpool.

He was a fine exponent of this genre of painting, with well observed and beautifully painted waves which are bright and lively. His knowledge of the ships depicted is plain to see and they are nearly always off a headland, lighthouse or port. He would have known well the coasts around Liverpool and its environs but the more distant and foreign topography would, as was common with marine painters at that time, probably have been based on prints or other paintings.

Heard's work has sometimes been confused with that of his fellow Liverpool marine artists, D MacFarlane and Samuel Walters but, as Archibald points out, "…he usually has a couple of idiosyncracies: a little curved bow wave, and a steamer usually somewhere appearing in the background of his paintings".

He remained in Liverpool for the rest of his life, and died in Upper Pitt Street on 17th November, 1859 at the age of 60. The Merseyside Maritime Museum, with nine examples, holds the largest collection of Heard's paintings apart from the National Maritime Museum. Other collections where his work can be seen include: Beacon Museum, Whitehaven; Walker Art Gallery, Liverpool; University of Liverpool; National Museum of Ireland; North Devon Maritime Museum; Tulic House Museum; Helena Thompson Museum; Snowshill Manor (National Trust); Peabody Museum of Salem in America. Some examples of titles include: "The Ship 'Sir Walter Scott' in New York", "The Clipper 'Star of the East' in Australia", "The Barque 'Charles Eyes', Captain Moss, off an Iceberg", "The Paddle Steamer 'Countess of Lonsdale'", The Port of Liverpool; in the foreground, the Ship ' John Campbell' owner Isaac Bold" and "The Barque Huguenot in a Gale."

The word barque (sometimes barc or bark) comes from a long etymological line with some claiming that it originated with the Greek word baris which referred to a type of Egyptian boat. It then appears in the Latin barca but this word in turn was possibly influenced by the Celtic barc and then the word progressed into Spanish, Italian and French from where it entered into English but had duality of meaning. The Latin languages use of barca referred to a small boat whereas the French barque implied a full-size ship. Prior to the 19th century in England, a barge described a small vessel used on inland waterways or close to the coast but by the mid-1800s, a bark or barque was distinct in meaning a ship of certain rigging.

The term as we know it now refers to a three-masted sailing vessel where the fore and mainmast are square-rigged and the bow and stern are not ornamented with a carved figure. The stern was broad and full and had windows and the ships became the workhorses of maritime commerce because they were efficient and required a relatively small crew to sail them because they carried fewer large square sails. Usually this meant thirty sailors aboard but a barque could just be operated with only ten. Although not as fast as a full-rigged vessel, a barque was easier to handle and had a significant advantage in being better at going to windward and this versatility was ideal for its commercial use.