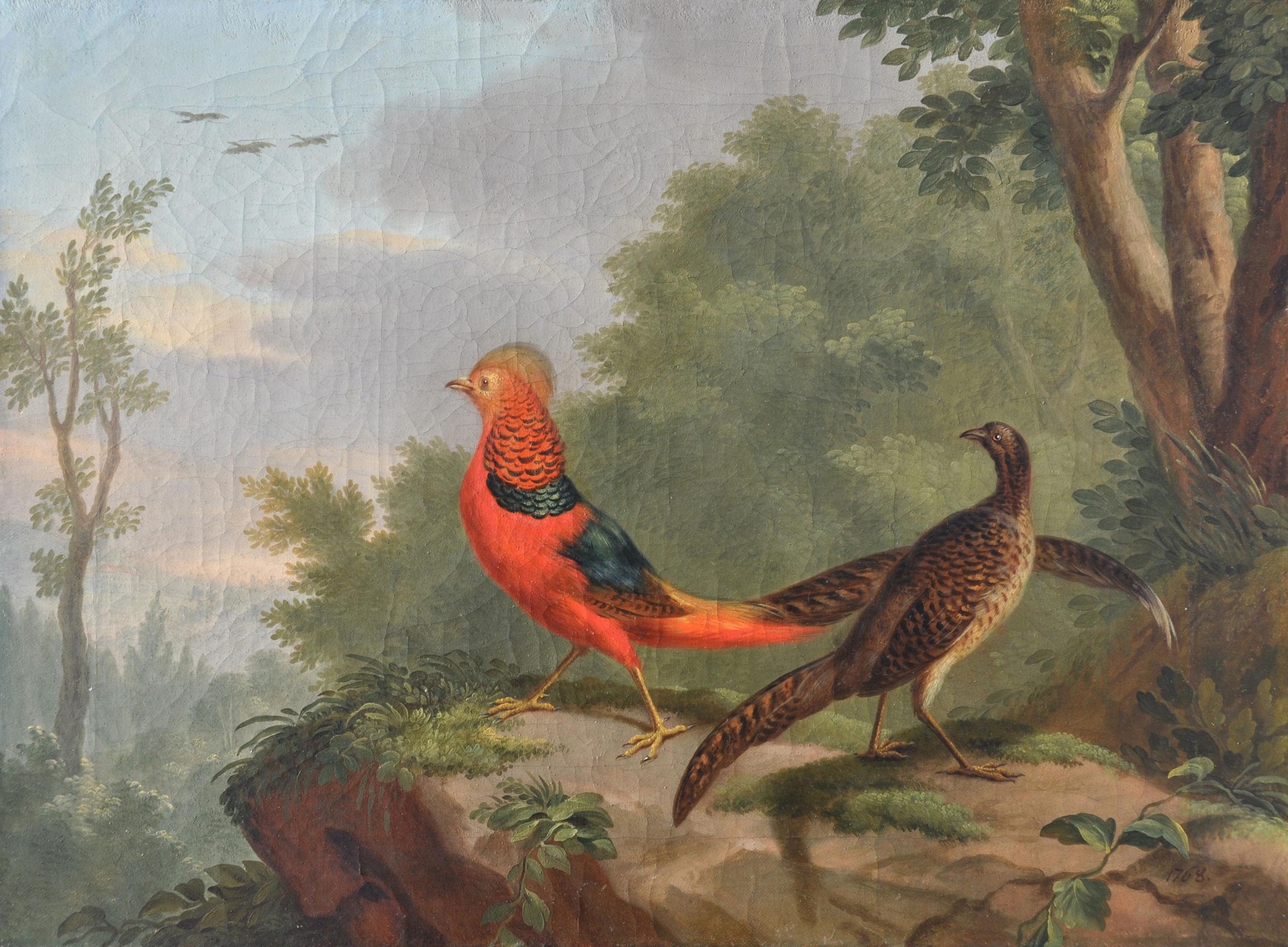 His father was Johann Konrad Tischbein, a carpenter at the convent in Haina, and they came from a family of artists, engravers, architects, set designers and decorators and cartographers which spanned three generations and was comprised of at least fifteen members. His younger brother, Johann Heinrich Wilhelm, became a portrait painter and gained the epithet the "Goethe Tischbein" on account of his friendship with the poet and writer and the famous painting that he did of Goethe in the Italian Campagna.

Johann Heinrich the Younger travelled in the Netherlands for a while working predominantly on landscape, animal painting and occasionally portraiture. He returned to the area of his upbringing, settling in Kassel which became known later in the early 19th century as the home of the brothers Grimm. His uncle had established an art gallery there on behalf of William VIII, Landgrave of Hesse-Kassel who had started to build Schloss Wilhelmstahl and was collecting paintings to fill it. In 1775, Tischbein the Younger was appointed Director of the gallery.

Apart from the oils and watercolours of the aforementioned subjects which included a portrait of the poet Gottfried August Burger done in 1771, Tischbein was a notable etcher and engraver. One of the best known of these is an etching of a much-loved Indian elephant which was part of the Landgrave menagerie. This animal had died prematurely as a consequence of injuries sustained in a fall and after the skull had been examined by Goethe, it became known as the "Goethe Elefant."

In 1790 Tischbein published the volume containing eighty-four plates with the title "Kurtzgefaßte Abhandlung über die Aetzkunst" (Brief Treatise on Etching). He gave artistic instruction to his nephew Franz Pforr which enabled the latter to gain admission to the prestigious Akademie der bildenden Kunste in Vienna and he went on to become a portrait and history painter of some note.

Examples of Tischbein's work can be seen in: the British Museum, The Hermitage in St Petersburg, the Metropolitan Museum of Art in New York, Fine Arts Museum of San Francisco, Nuremburg and Spire.

THE GOLDEN PHEASANT
The golden pheasant, also known as Chinese pheasant, is a member of the phasianus family which is the most widespread gamebird in the world. The genus is a native of Eurasia but was introduced to Europe, North America, Africa and elsewhere where it has become established.
The Colchicus or black-necked pheasant, which used to be known as the Old English, is the most common pheasant in Britain and has been present here for at least 900 years. The Golden pheasant originated in the mountainous forested regions of western China and was introduced to Britain later and, together with other exotic Asiatic breeds, has successfully interbred with the Colchicus resulting in a varied amalgam of birds with differing plumage. The Golden pheasant in England is best observed in its pure state in the area encompassing northern Suffolk and southern Norfolk, particularly around Thetford Forest.

The Golden Pheasant male has a highly distinctive plumage with a bright red body and golden crest and rump and it measures overall about 100 cms in length of which the tail accounts for about two-thirds. There is group of deep orange feathers around the neck which can open up in display rituals to form a type of cape which covers almost the whole face. The female's plumage is more like the female Old English although it has a longer and more distinctly barred tail then the latter. The natural wild type is known as "red-golden" to separate it from the form usually encountered in zoos or aviaries which have often been cross-bred, particularly with the Lady Amherst.

It is somewhat surprising that for a bird with such distinctive appearance, comparatively little is known about its behaviour in the wild. They prefer to live in the dark recesses of dense young conifer plantations and forests and are difficult to locate and feed on the ground but will take off suddenly almost vertically with a loud clattering of wings and remarkable acceleration. The somewhat ungainly flight is brief however and consequently they spend most of their time on the ground, moving on foot while they search for grains, invertebrates and berries.


THE SILVER PHEASANT
This bird hails from a similar habitat to the Golden but emanates from southern and eastern China and mainland south eastern Asia.
Both the male and female have a red face and red legs and whereas the male has silvery-white plumage on its back and wings, the female is predominantly brown with a blackish brown crest and black and white in the tail. The call of the male is a shrill whistle and the female emits a repeated deep 'whoor' sound. In Europe, it is most commonly found in the wild in Germany but it is a popular breed in aviculture