A Still Life of Flowers in a Terracotta Urn 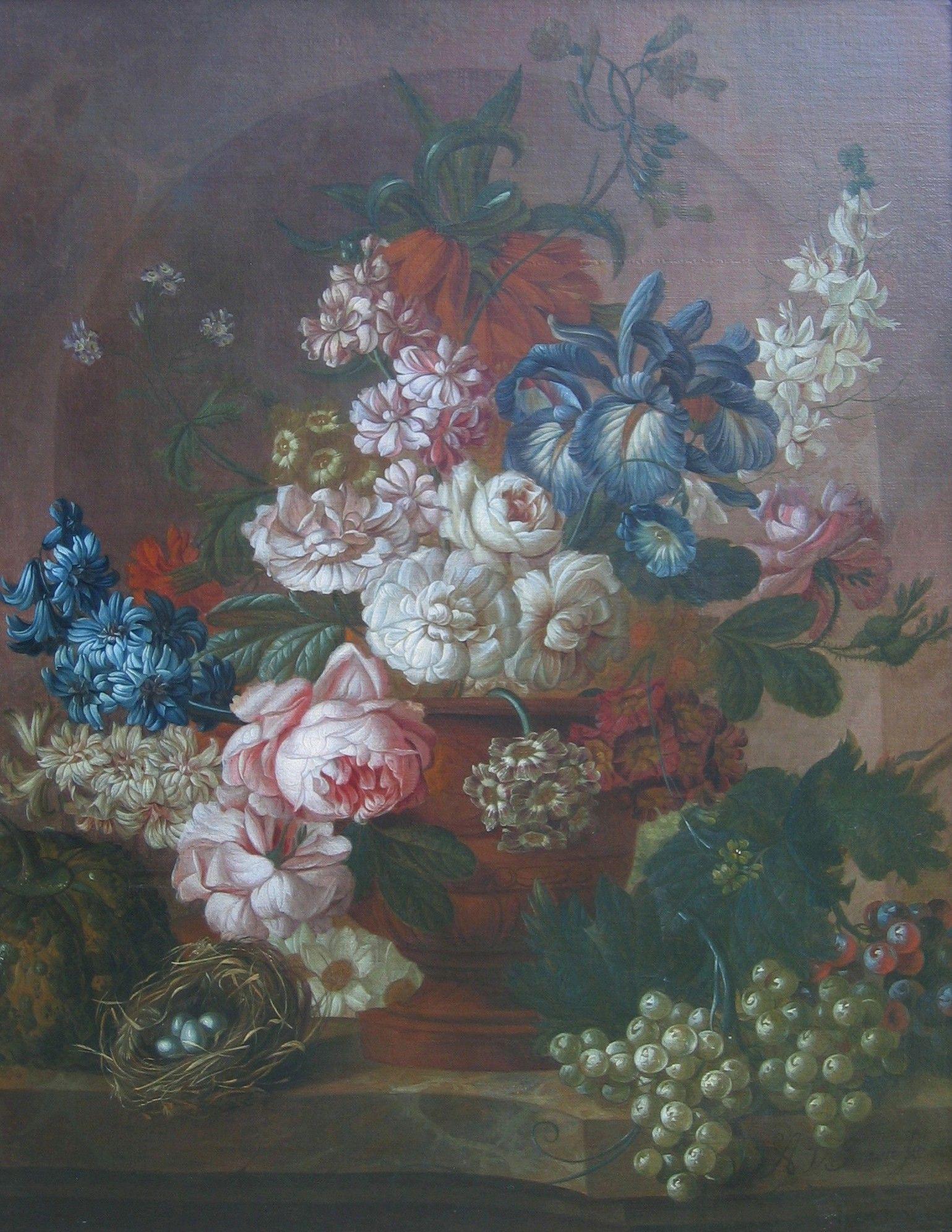 A Still Life of Flowers in a Terracotta Urn

A still life of flowers in a terracotta urn standing on a marble ledge beside a bird’s nest and a pomegranate; a stone niche behind

This is a classic 18th century Dutch still life following the inspiration of the important artists Jan van Huysum and Jan van Os.

They in turn had been continuing the renowned tradition of Dutch 17th century still life painting but whereas that period had seen rather sombre backgrounds offset by strong floral and fruit colouration, the 18th century versions had a lighter and airier feel to them.

Still life came into its own with the Dutch and Flemish painters of the 17th and 18th centuries and often flowers and objects contained a hidden allegory: sometimes on the transience of the things of the world, the evanescence of human life and the inevitability of death and beyond that, the Christian Resurrection. Flowers were used to demonstrate the brief span of life and ensuing decay. A bird's egg, an ancient eastern religious symbol which was associated with the advent of spring and hence rebirth, was commonly utilised as were birds, denoting the human soul, insects and especially butterflies, with their stages of caterpillar, chrysalis and butterfly mirroring the three ages of man.

Grapes could be used to as the symbol of the wine at the Eucharist and when not combined with summer flowers could be the attribute of Bacchus, the god of wine and consequently a personification of Autumn, one of the Four Seasons. Pomegranates were a Christian symbol of the Resurrection, an idea taken from classical mythology as it was the attribute of Proserpine who came each year to regenerate the earth at springtime. This fruit has a tough skin and contains an abundance of seeds so was seen to be like many united together under one governing body sharing a common cause.

Flowers and bird's nests also represented Spring, one of the Four Seasons. Flowers could also be an allegory for Smell, one of the Five Senses, of Hope and of Logic, one of the Seven Liberal Arts.

Roses were associated with the Virgin Mary, who, because she was without sin, was a rose without thorns. Early legend had it that roses were thornless until the Fall of Man from Paradise. Red roses were for martyrdom and white were for purity. In classical settings, the rose was sacred to Venus the goddess of love, evoking both her beauty and fragrance through the blooms but with the latent threat of the pricking of the thorns, the wounds of love. The iris was the attribute of Juno in Greek mythology but in Christian art was often associated with the Virgin in the place of the lily. Columbines were thought to look like flying doves so were the symbol of the Holy Ghost

The use of these objects symbolically changed over the years and would depend on the taste or religion of the artist or the patron of the artist. However, it should be stressed that not all still life painting was deliberately carrying an abundance of hidden messages; often it just reflected the objects or flowers that the artist liked to paint or to demonstrate his technical prowess.