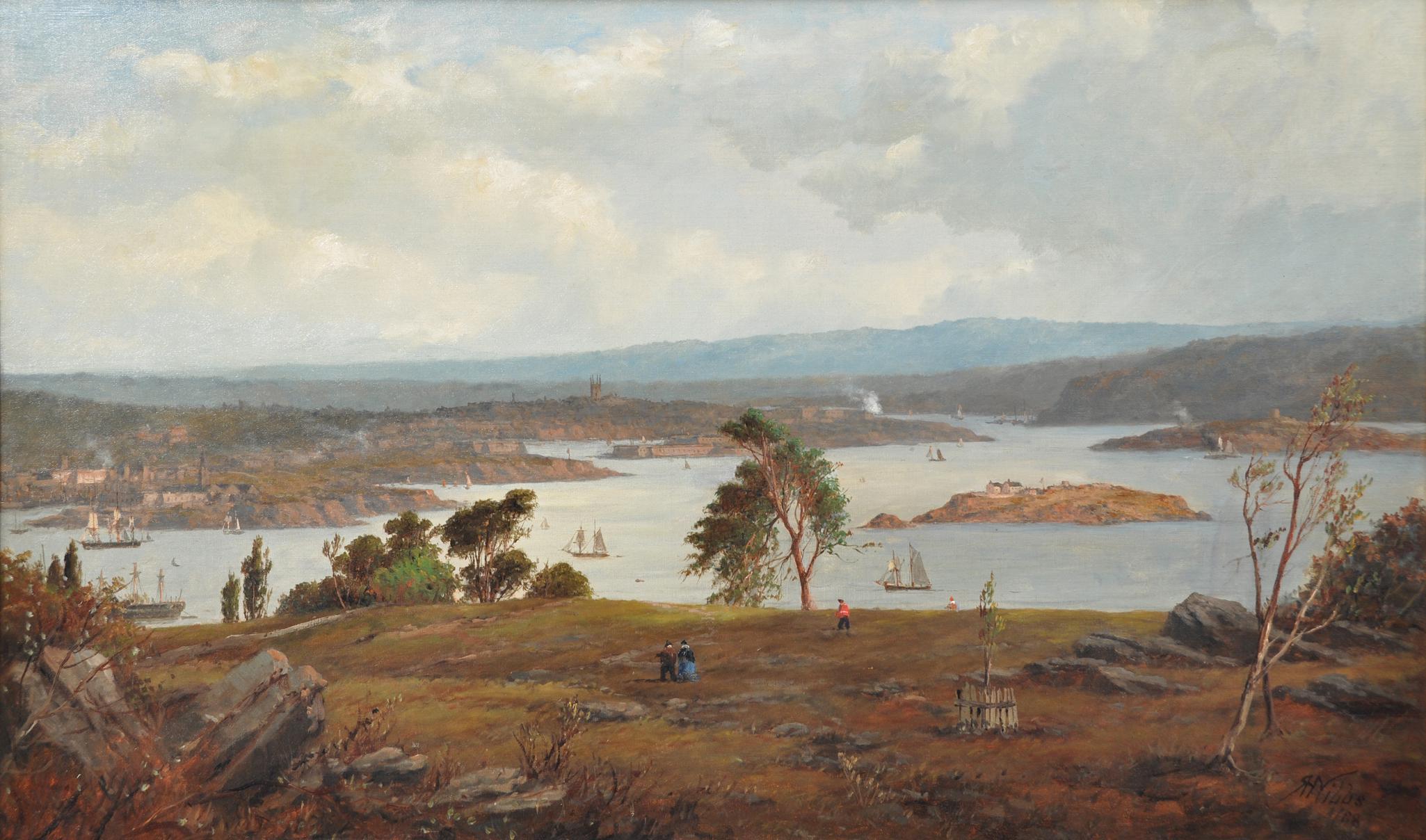 Oil on canvas, signed and dated 88


A painter of marines, sea battles, landscapes and genre R H Nibbs was born in Brighton and apart from a brief period when he sent Royal Academy exhibits from London addresses in Lambeth Walk and Walworth in 1841/2, spent his whole life there at residences in Howard Place, Mount Zion Place and Buckingham Place. He can be regarded as a Sussex artist and there was a retrospective exhibition of his work held at Brighton Polytechnic Gallery in 1974.

He was educated at a school in Worthing where the headmaster was the son of the watercolourist Henry Fryer Tidey N.W.S. (1814-1872) and it is possible that this connection inspired the young Nibbs. However it was as a musician that he started his working life and he was a professional cellist in the orchestra of the Theatre Royal in Brighton having studied violin and cello at Worthing and then teaching the instruments there.

In 1840 he inherited enough money to enable him to pursue his love of painting and although he was largely self-taught, he had a keen eye for composition and he exhibited his first work at the Royal Academy in 1841. He concentrated on depicting the sea and littoral of Kent through to Devon with the exception of some Thames views in Berkshire and London and also travelled in France, Germany and Holland between 1850 and 1860. His interest in the sailing craft and nature of continental subjects elicited an article in the Art Journal regarding his British Institution exhibit in 1860 Early Morning on the Coast, Bosham, Sussex which said that: "The subject looks infinitely Dutch; it is difficult to believe that on the Sussex coast there is anything so primitive."

Nibbs exhibited forty-two works at the Royal Academy, ninety-six at the Royal Society of British Artists in Suffolk Street, thirty-eight at the British Institution and twenty-nine at other institutions and venues. Examples of his subject matter include: H.M.S. Vengeance; The landing of Queen Victoria at Brighton Chain Pier in 7th September, 1843; Battle of the Nile; The Battle of Trafalgar, 21st October, 1805; Crimean War: First shot of the War, 6th April 1854; Lord Mayor's Day; Bodiam Casle, Sussex; Mill at Dell-Quay, Chichester Harbour, Sussex; Brighton Hog-boats putting to sea; In the Weald of Sussex; Old Drawbridge on the Ouse at Barcombe, East Sussex; The Thames at Greenwich; The ship 'Essex' near icebergs; Hay barge off Sheerness and On the Rhine, near Caub.

He also illustrated his own publications and in 1850 published Marine Sketch Book of Shipping Craft and Coast Scenes followed by The Churches of Sussex in 1851 and Antiquities of Sussex in 1874.


2020 marks the four hundredth anniversary of the departure of the Mayflower from Plymouth. The vessel, about 100 feet in length and square-rigged, had departed Wapping or Blackwall on the Thames in mid-July and sailed to Southampton where she awaited the arrival of the Speedwell which was coming from the Netherlands with English Puritans living in self-imposed exile and hoping to reach the New World. The two ships left Southampton on around 5th August but the Speedwell soon developed a leak and had to put into Dartmouth where repairs were effected. They set off again but 200 miles out from Land's End, further leaks appeared in the Speedwell forcing them to make for the safety of Plymouth. The Speedwell then abandoned the voyage and returned to Holland with some of the passengers. The remainder joined the Mayflower taking the number of pilgrims to 102 with between 25 and 30 crew. They finally departed on 6th September in the old Julian calendar (16th September in the Gregorian) reaching Cape Cod on 9th November.