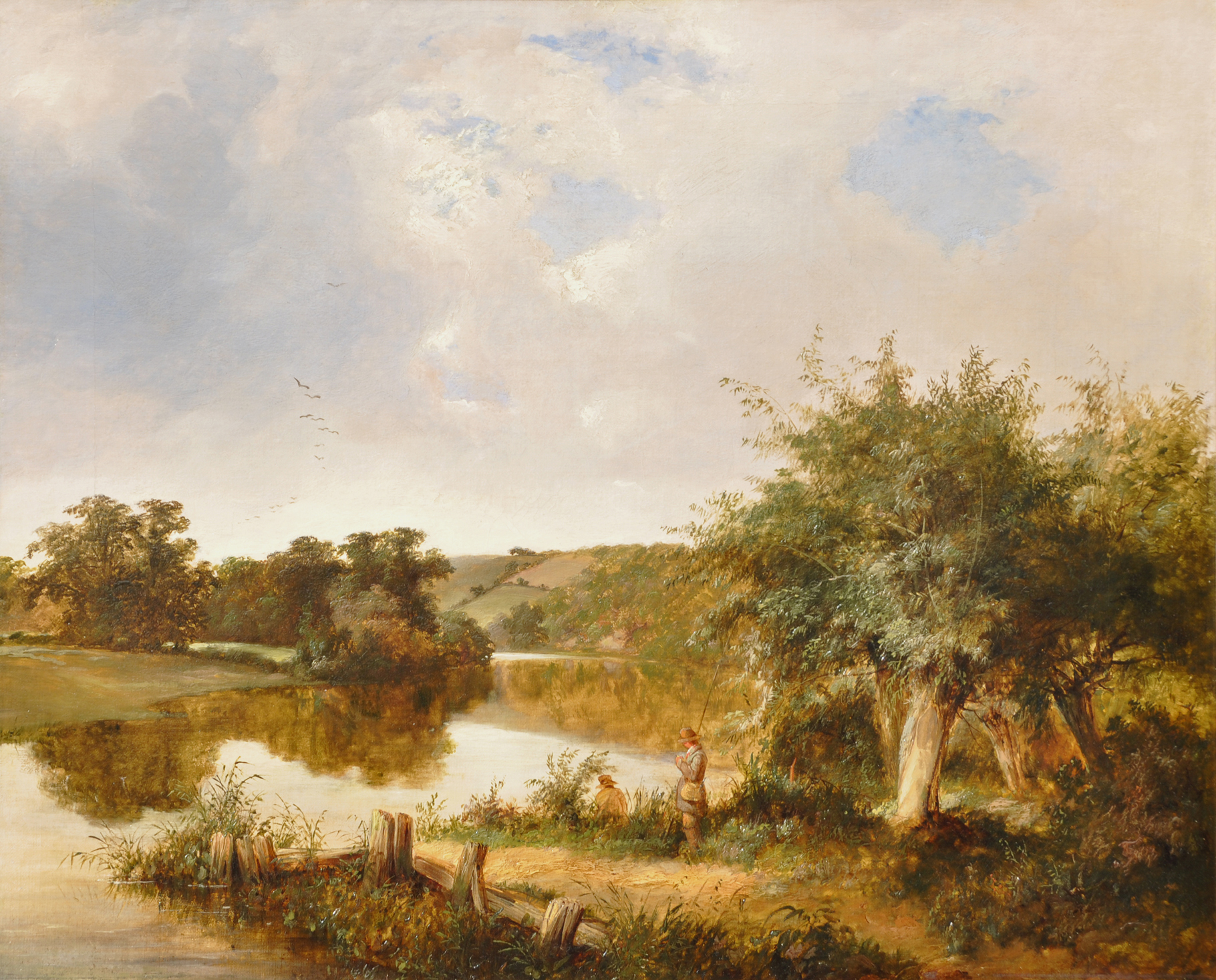 Henry John Boddington was a Victorian landscape artist whose work displays a fine grasp of technique and craftsmanship. His preference was for summer landscapes and the paintings are imbued with a sunlit warmth with hazy light and deep shadows.

His family was densely populated with artistic talent and he was the second-born son of six boys of the landscape painter Edward Williams (1782-1855) who painted initially in the 18th century manner which in turn displayed the earlier influence of the great Golden Age Dutch master Meindert Hobbema. Edward’s father was a noted engraver and his mother Charlotte was a daughter of James Ward R.A., the important animal and landscape artist. He was also related by this marriage to George Morland, Henry Bernard Chalon, Martin Theodore Ward, Edward Matthew Ward and the portrait painter John Jackson R.A. and his children and descendants numbered at least fifteen painters.

Henry was born in the district of St Marylebone, London, and displayed a natural ability to paint and draw from an early age. This talent was encouraged by his father who instructed him in the technical requirements and this was the only formal training that the aspirant artist received. His early years as an artist were not particularly fruitful and he seems to have been in the shadow of his renowned father. However, his marriage to Clarissa Eliza Boddington in 1832 marked a turning point in his career. The daughter of a solicitor’s clerk, she was resolute and strong willed and determined that her new husband should achieve success. Henry John took Clara’s maiden name with the clear intention that it should define him as an artist and remove him from any association with his eminent father.

Edward had followed in the tradition of 18th century English landscape painters, which in turn had been so influenced by the 17th century Dutch painters and this style had been imbued in to the young Henry John. Following the adoption of his new name, he depicted landscape in a more realistic way and a marked trait was how he portrayed filtered light through the leaves of archways of trees. He made many drawings while out in the country and these detailed preparatory studies were translated into effects that he achieved in the finished oil paintings.

Boddington exhibited his first painting at the Royal Academy – On the Thames near Weybridge – in 1837 and also showed two works in the British Institution in the same year. By 1840, he had gained some renown through successfully showing his village and woodland scenes and in 1842 he was rewarded with being elected a Member of the Society of British Artists, a body with a limited membership which gave it a certain cachet and he was the only one of the Williams family to achieve this.

He travelled to Yorkshire, Derbyshire and Devon in 1841-2 followed in 1846 by his first journey to Wales and it was here that he found great stimulation for subject matter, returning several times, particularly to the rugged mountainous terrain around Bettws-y-Coed and Dolgelly.

Although he exhibited at both the Royal Academy and the British Institution, the main venue for displaying his work was the SBA and in all he showed 244 works there, sometimes with ten at one time. John Ruskin, in his Notes on the SBA in 1857, described Boddington’s pictures as having honesty and displaying a true love of countryside. The Illustrated London News edition of 6th March 1847 had as its cover a woodcut taken from a painting that he had shown at the BI and in its notes about the illustration wrote that “..the picture we present on our front page is Mr Boddington’s village church , a genuine scene of English life. The church is placed upon a noble avenue of trees and the composition is in the painter’s best style…”

Boddington was adept at knowing what the purchasing public wanted and remained popular even when the deleterious effects of his eventual fatal brain illness took hold in the early 1860s. He had collaborated with John Frederick Herring Snr with the renowned painter contributing animals to some of his pictures. The Dictionary of National Biography described Boddington as "…of a humorous, amiable, and manly character". He died at his home in Lonsdale Villa, Barnes, on 11th April 1865 and was buried in Barnes cemetery, leaving a son, Edwin H Boddington, also a painter who specialised in landscapes also.

Examples of some of his exhibited paintings include: Young anglers; On the banks of the Medway; Fishing party at Marlow-on-Thames; Sheep washing – scene in Devonshire; Rabbit shooting; On the banks of the Thames; The haunt of the moorhen; Haymaking near Henley-on-Thames; A country alehouse; The salmon trap on the Llugwy; The farrier’s shop.