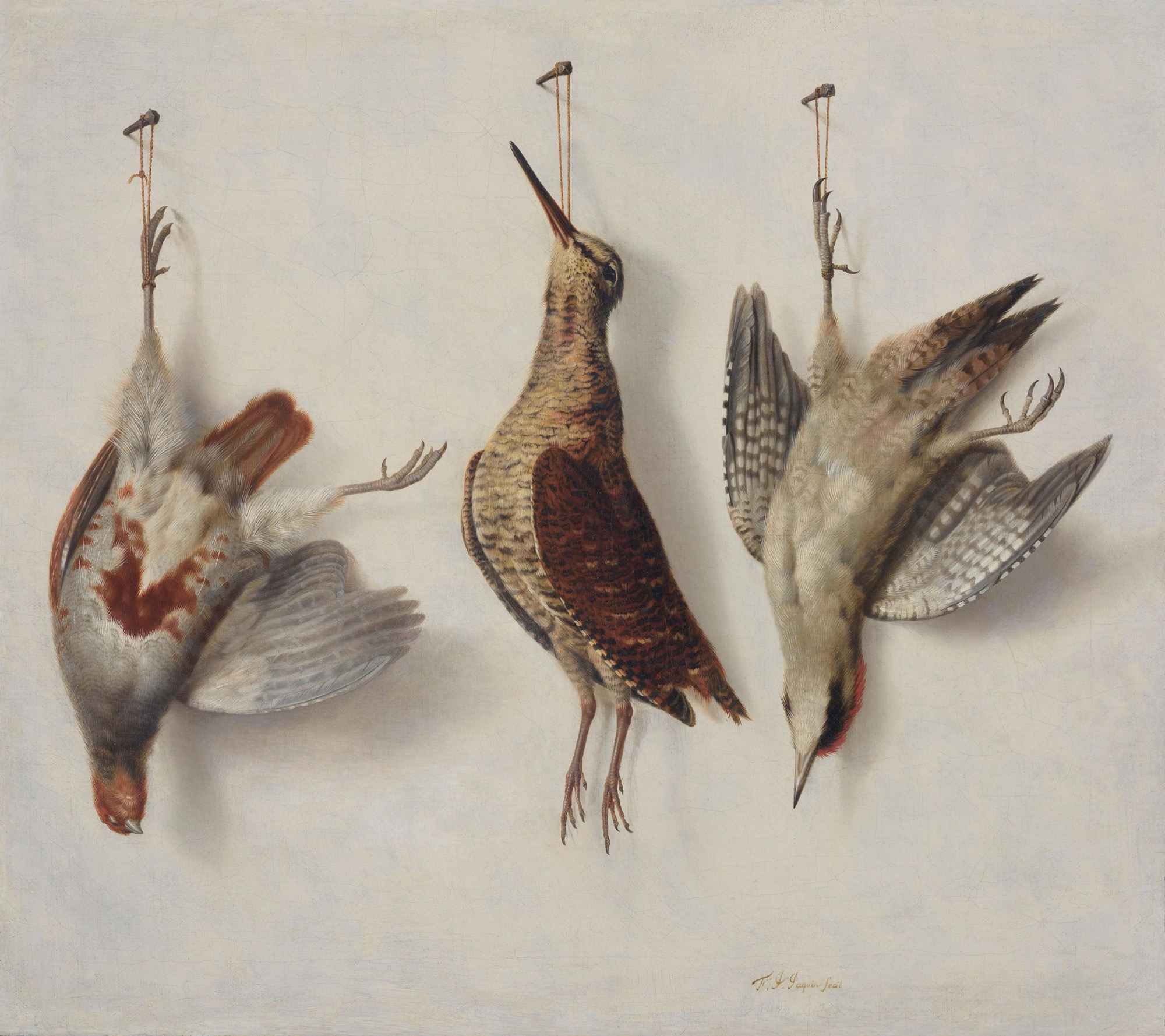 A Trompe l’Oeil Still Life of a Partridge, Woodcock and Spotted Woodpecker hanging from Nails against a white-washed Wall

François Jaquin was a Brussels-born artist who specialised in portrait painting, parituclarly of the upper echelons of the ecclesiastical hierarchy, but he also produced history paintings, animals and still-lifes. The latter tended towards beautifully observed depictions of birds, often draped over the edge of a table and in this his work is somewhat redolent of the more spare works of the Dutch still painter Elias Vonck 1605-1652. Jaquin's scarce works in the illusionist style, with birds against plain walls where the natural light and shade effects, combined with very fine painting of the plumage, makes them appear real, continues the tradition of two of the masters of this form of painting in the Netherlands in the 17th century: Cornelis Biltius and Cornelis Norbertus Gysbrechts.

He studied at L'Académie de Bruxelles in 1768 and L'Académie d'Anvers. At the latter, he was attached to the studio of A J Anthonissen and also became a friend of the landscape painter Balthasar Paul Ommeganck there. In 1775 he moved to Louvain where he completed his academic training under the instruction of Laurent Geedts and it was at about this time that he began to specialise in portraiture. He gained the commission to paint the prelate of l'Abbé de Parc which gave him the introduction to religious dignitaries who found his work particularly attractive and he was inundated with portrait commissions, a workload which he found increasingly hard to keep on top of.

Interest in his work extended to the nobility through their close relationship with the Church and ultimately to the Emporor Frans Joseph II. Jaquin painted him in 1792 and considered the work to be his masterpiece. The painting was installed in the Town Hall at Louvain (and engraved by A Cardon) but was burnt on 21st January 1795 by the populace of Louvain and this depressed the artist considerably. When France invaded Belgium in 1794, controlling it until 1814, all Jaquin's commission work stopped abruptly. He gave up painting and became a trader in wine and cloth.
However, in 1800, he founded the l'Acedémie de Louvain with fellow artists Pierre Josse Geedts, Francois Berges, Pierre Joseph Verhaegen, Pierre Goyers, Martin van Dorne and Antoine Clevenbergh. One of his pupils at the Academy was Hendrik van der Haert and one of the latter's later commissions in his career was a series of trompe l'oeil bas-relief en grisaille for the halls of the Concert Noble in Brussels, thus continuing the interest in illusion occasionally followed by his master. The founding of l'Académie coincided with the rekindling of Jaquin's artistic career and he re-established himself as a portrait painter, although in the secular world of merchants and the middle classes of Louvain. The majority of his work was undertaken in Louvain - where he died on 1st November 1826 - but he also worked in Hainaut and the Brabant as well as in Holland

Examples of his work can be seen in the La Musée de Louvain, La Musée de Verviers and in the Town Hall, the University and church of S. Joris Winge, St Peter's Cathedral, the Abbeys of Averbode and Tongerloo in Louvain and in l'Église Saint-Rombaut in Malines.