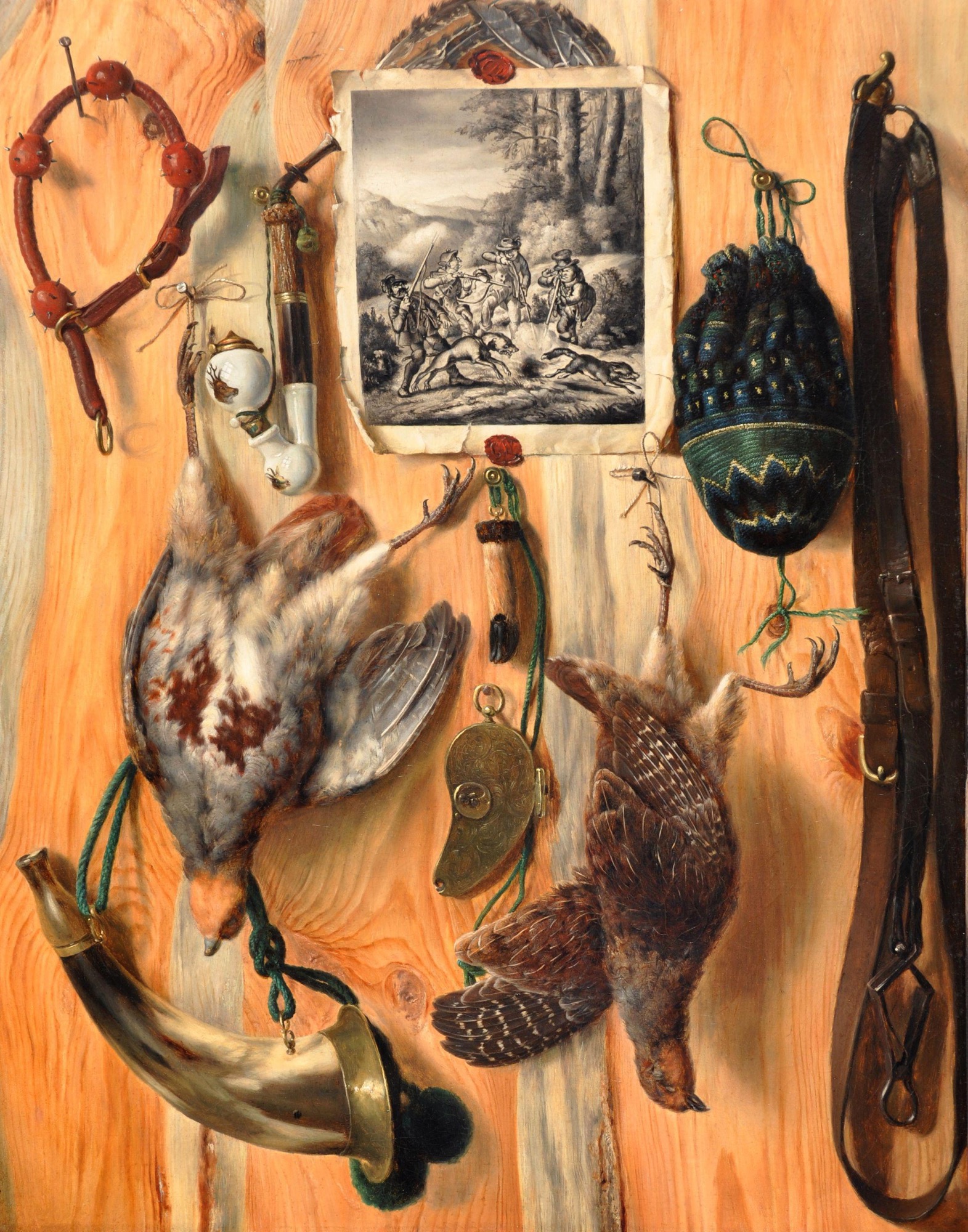 Johann Friedrich Andreas Heimerdinger was born in Altona on 10th January 1817. He studied under the portraitist, history and genre painter Ferdinand Theodor Hildebrand in Dusseldorf from 1839 until 1842 and, after 1845, at the Munich Academy.

He founded a School of Drawing in Hamburg for painters and sculptors which became very successful due to his excellent teaching ability and it achieved considerable significance. Heimerdinger is important in the history of schools of drawing because he introduced the method of drawing by closely observing actual subjects. The Hamburg Trade School implemented his method and afterwards it was widely used across Germany. In 1857 he published "Elements of drawing following physical subjects" and in 1868 published "Exercises for School and Home".

His paintings are known for their extraordinary observation of naturalistic detail and are usually comprised of still-lifes of fruit or dead game, particularly in an illusory style with birds hanging from the lids of wooden boxes or from walls. These works became very popular during his career. He exhibited his works regularly, particularly in Vienna at the Academy there between 1869 and 1874 and the museum Kunsthütte Chemnitz has a painting of Autumn Fruit in its collection.

He died in Hamburg on 2nd October 1882 after a long and prolific career.

The idea of recording hunting success seems to have had royal origins, particularly when associated with deer-hunting and the taking of a particularly fine specimen. One particularly influential example of this genre, done in trompe l'oeil, was produced by the French artist Jean-Baptiste Oudry who was animal painter to Louis XV. On 3rd July, 1741, Louis' hunting party took a hart with an unusually shaped head and the king thought it important enough to record the event, summoning Oudry to Court. The painter produced a striking work depicting the stag's antlers resting on a wooden shelf against a plain wooden panelled background to which was affixed, by a single nail, a piece of paper recording the event.

The King was intrigued by this new format of displaying hunting prowess and there followed a series of Oudry's trompe l'oeils, supplanting the wall-mounted heads which hitherto had been the fashion. Oudry's works were augmented in the royal collection, housed in the semi-circular staircase in the private apartments, by examples by Jean Francois Perdrix and Jean Jacques Bachelier.

Still-life as a distinct and separate subject rather than being an integral part of a work, was largely unknown until the beginning of the 16th century when a painting of a partridge appeared in 1504 by Jacopo de Barbari which also happened to be one of the earliest examples of a trompe l'oeil. This seems to have spawned a significant number of similar works showing dead game and initially were for the wealthy landowners and aristocracy, those who could afford to hunt, but then taken up by the merchant classes and bourgeoisie.

The depiction of a bird hanging suspended from a nail against a natural but simple background, concentrates the eye keenly and one notes the juxtaposition of the softness and subtle colouration of the feathers against the grained and knotted wood. In this, they more closely resemble the still-life of suspended fruit by early 17th century Spanish painters such as Juan Sánchez Cotán and Felipe Ramirez. Although in Italian still-life game paintings such as in those of Caravaggio and Evaristo Beschanis for example and the 17th century Netherlandish painters such as Willem van Aelst, Jan Vonck and Simon Verelst and the Scottish William Gowe Ferguson, one sees birds hanging, often almost in isolation, they are usually part of a still-life composition set in a larder. They tend to be in a more obviously three dimensional space as opposed to a trompe l'oeil which employs a more linear background to set off the objects against it.

A different route had evolved from the depiction of a single trophy in the painting portraying the equipment utilised in obtaining a trophy, so hunting horns, guns, powder flasks, game bags, dog collars or, if birds of prey were used, whistles, hoods and jesses In the 17th century, elaborate paintings of these objects carefully aligned against an often white background were best exemplified by painters such as Johannes Leemans and Cornelis Norbertus Gijsbrechts in the latter half of the 17th century and continued through nortern Europe into the 19th century and in America by such as William Harnett.