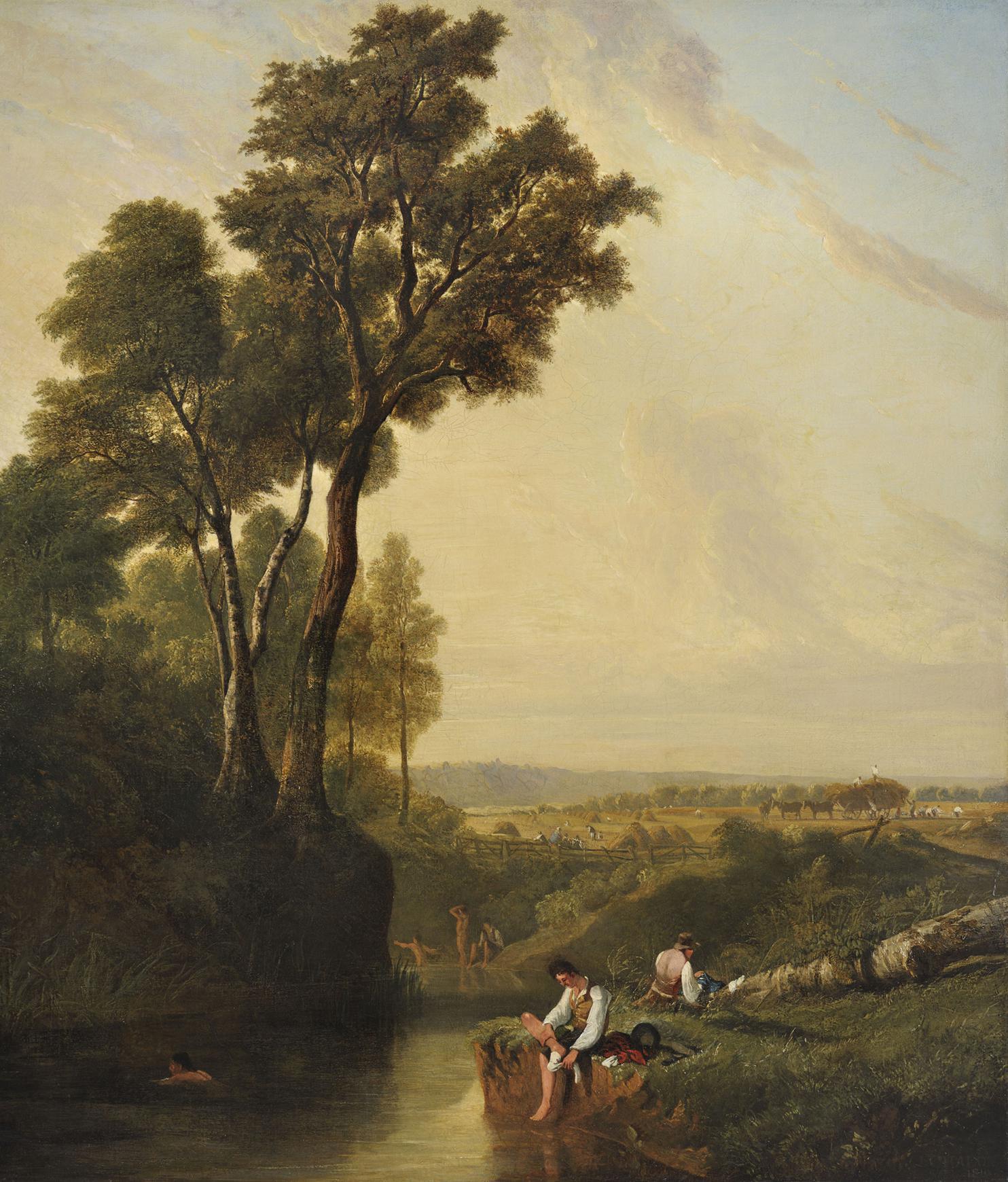 
John James Chalon, like his renowned younger brother, the portrait and genre painter Alfred Edward, was born in Geneva on 27th March 1778. The family was of French Protestant descent which had fled their native country following the Revocation of the Edict of Nantes in 1685. The edict of Nantes, passed by Henry IV in 1598, had granted tolerance to Huguenot Protestants and had helped bring a statutory conclusion to the Wars of Religion of 1568 to 1592.

There were strong links between Geneva and England at this time. Britain was in the ascendancy as a world power at the expense of France whose influence was waning and the opportunities that this afforded to people with skills and ideas, combined with the long-standing religious sympathies between the city and this country, meant that Geneva had a population who became Anglophiles. There had been an influx of artists who came to work
towards the latter half of the eighteenth century including Jean-Etienne Liotard, Barthélemy du Pan, Jacques Laurent Agasse and François Ferrière.

The Chalon brothers' father had secured the position of Professor at the Royal Military Academy at Sandhurst in 1789 so the family came to England where both brothers joined the Royal Academy Schools of Art - John doing so in 1796 and John exhibited his first painting at the RA in 1801 "A Turnpike Gate" followed by "Banditi at their Repast" in 1802.

In 1808, the Chalon brothers, together with some friends, founded 'The Society of Epic and Pastoral Design' which later became known by the lighter epithet of 'The Chalon Sketching Society' and even the 'Bread and Cheese Society' because of the members taking it in turn to provide food and drink when they met. John had been appointed an Associate Member of the Old Water Colour Society in 1805 and was elected a full Member in 1808 but resigned from this august body in 1813 to concentrate on working in oils. He was also elected an Associate Member of the Royal Academy in 1827, gaining full membership in 1845.

He is best known as a landscape painter although there are a few animal, history and genre paintings and marines. The landscapes are in the traditional style and a large part of his English scenes were painted close to the Thames and in this endeavour he worked with Thomas Christopher Hofland, a landscape artist with a similar style with whom he was good friends. He also produced a significant number of paintings depicting Switzerland, particularly in the Geneva environs, including a masterful view of Château Chillon. In 1820, he visited Paris, painting some oils and in 1820 he published a collection of lithographs with the title "Sketches from Parisian Manners".

The Swiss connections worked well in London for the Chalon family as well as for the ex-patriots who arrived in London. Francois Ferrière lodged with the Chalon family at their home in 8, Church Lane, Kensington and, because Chalon Senior was friends with the father of the eminent Swiss animal and landscape artist Jacques Laurent Agasse, the artist too lodged with them, sending his first two Royal Academy exhibits in 1801 from that address. Indeed it is believed that in Agasse's painting of 1818 "The Black Stallion", the servant girl is modelled from the Chalon's Scottish maid.

Chalon exhibited at the major London institutions from 1801 to 1854 with 86 at the Royal Academy, 48 at the British Institute and 55 at the Old Watercolour Society. Some examples include: "Richmond - Autumnal morning", "Schoolboys trying their boats", "Entrance to a farmyard, Berkshire", "The Serpentine, Hyde Park, during the late frost", "Westminster Abbey and the buildings adjacent, during the conflagration of the Houses of Parliament, on the night of the 16th October, 1834", "Napoleon on board the Bellerophon at Plymouth in 1815" (now in the National Maritime Museum), "Alpine Scenery, Canton of Berne, Switzerland", "La Place de la Fusterie, Geneva, on a market day", "The first gleam of sun on the Jung Frau", "Macbeth's first meeting with the three witches", "The Boulevards, Paris".

There are examples of his paintings in the Victoria and Albert Museum, National Maritime Museum, National Gallery of Ireland, Diploma Gallery in the Royal Academy. There is a portrait of him in the National Portrait Gallery by John Partridge and his friend Agasse also painted him, standing at his easel.

J J Chalon was a significant landscape painter of the early part of the 19th century, bridging the stylistic divide between the more sombre-toned 18th century manner and that of the brighter Victorian. His painter friend Charles Robert Leslie wrote of him that few painters "…had so great a range of talent". M H Grant says of him "…a painter of landscape…his style and quality…nearly to masterpiece with many good and true English landscapes". In 'A Century of British Painters' by S & R Redgrave, they write that "…in his early days, much of his time was given to teaching, and although he was an exhibitor for fifty years, his works are comparatively few." He died in Kensington on 14th November, 1854.