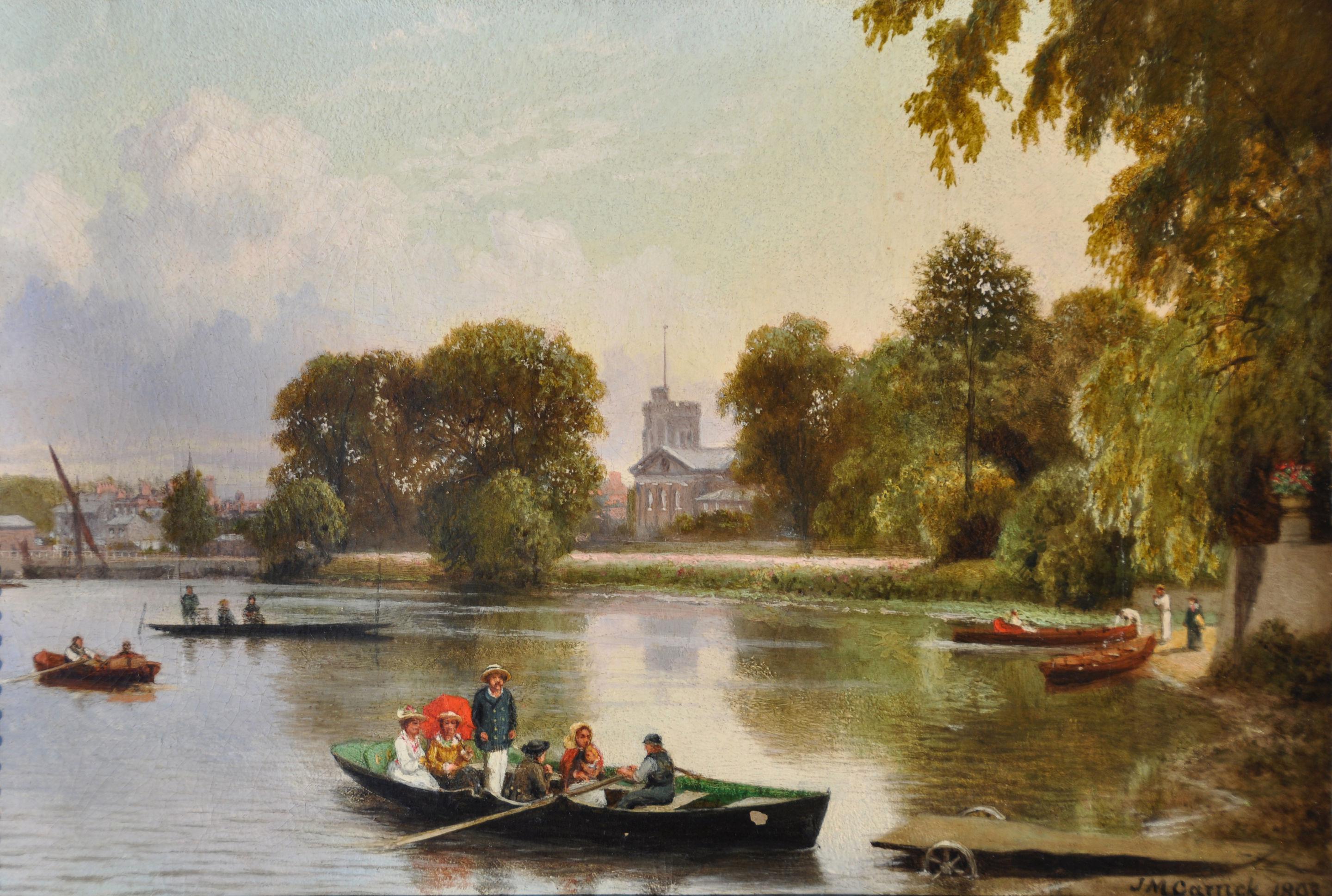 Christopher Wood, in his Dictionary of Victorian Painters, says of J M Carrick that: "His pictures are usually small, detailed and of high quality…"

He was a landscape and figure subject painter and illustrator who was born in Carlisle and baptised there on 9th April. His father was initially a chemist but became an artist when the family moved to Newcastle in 1836 and it is presumed that he taught his son to paint. However in 1839 they had moved to London and his father exhibited portraits at the Royal Academy from 1841 giving his address as 44, Berners St. By 1849 they had moved to 10 Montague St and it was from here that J M Carrick sent his first exhibited painting to the R.A. in 1854 with the title "From Borrow Common, looking towards Borrowdale, Cumberland."

In 1856 he showed "The Village Postman" at the R.A. and this work earned the praise of John Ruskin who in his appreciation wrote that it evinced "…more than usual fidelity…" and "…immense labour…" Further praise came from the Athenaeum magazine and the Spectator included it in its list of "superior examples" from that year's offerings.

Besides his paintings of English subjects, Carrick also travelled in Spain, France and Switzerland to discover new subject matter. In later life he was increasingly drawn to the depiction of English coastal scenes and was working in Cornwall in 1871 and came under the sway of the Newlyn School painters in the early 1880s. His style displays a closely observed and detailed technique and this owed something to his sympathy for Pre-Raphaelite ideas. The influences of this movement can be clearly detected, particularly in the early work and in this he is similar to others such as John Samuel Raven and Edward Charles Booth and Ruskin mentions all three of them in his Academy Notes. Carrick was a member of the Hogarth Club which had been founded in 1858 by former members of the Pre-Raphaelite Brotherhood after that body had been dissolved. The purpose of the club was to provide an alternative exhibition venue and meeting place to counteract the prejudice they experienced at the Royal Academy. Ford Madox Brown had suggested the name as Hogarth was "…a painter whom he deeply reverenced as the originator of moral invention and drama in modern art" and its home was 84 Charlotte St, Fitzrovia.

Carrick also worked as an illustrator and utilised notable contrasts of light and shade, enhancing the effect of the sun by dappling the clothing of his figures as the light played upon them and emphasising the contrasting shadows with minute hatching. He contributed drawings to Charles Mackay's The Home Affections in 1858 and designed some for A A Proctor's Legends and Life in1865. At least one of the drawings from the latter was later turned into an oil painting by Carrick.

He showed his works at the Royal Academy, the Royal Society of British Artists and the British Institution between 1854 and 1871. Titles of some of his paintings include: "Brentford Ferry," "Lock on the Brent," "Brook Ford, Devon," "Nice with Antibes, the island of St. Marguerite and the Esterelles - a winter study," "Umbrella pines in the Bay of Cannes of France," "The Alhambra and Sierra Nevada, Granada, Spain," "Mosque near Granada," and "Magdalen Bridge and College." Paintings by him are held in the collections of Chiswick Local Studies Library, Gunnersbury Park Museum, the Government Art Collection and Guernsey Museums and Galleries.

He steadily moved west from central London during his lifetime with residences in Campden Hill Road, then out to Thorpe near Chertsey followed by Sudbury-on-Thames before settling in Chiswick where he died on 22nd September 1896. His two sons by his wife Louisa also became artists.

signed and dated 1893, inscribed on reverse