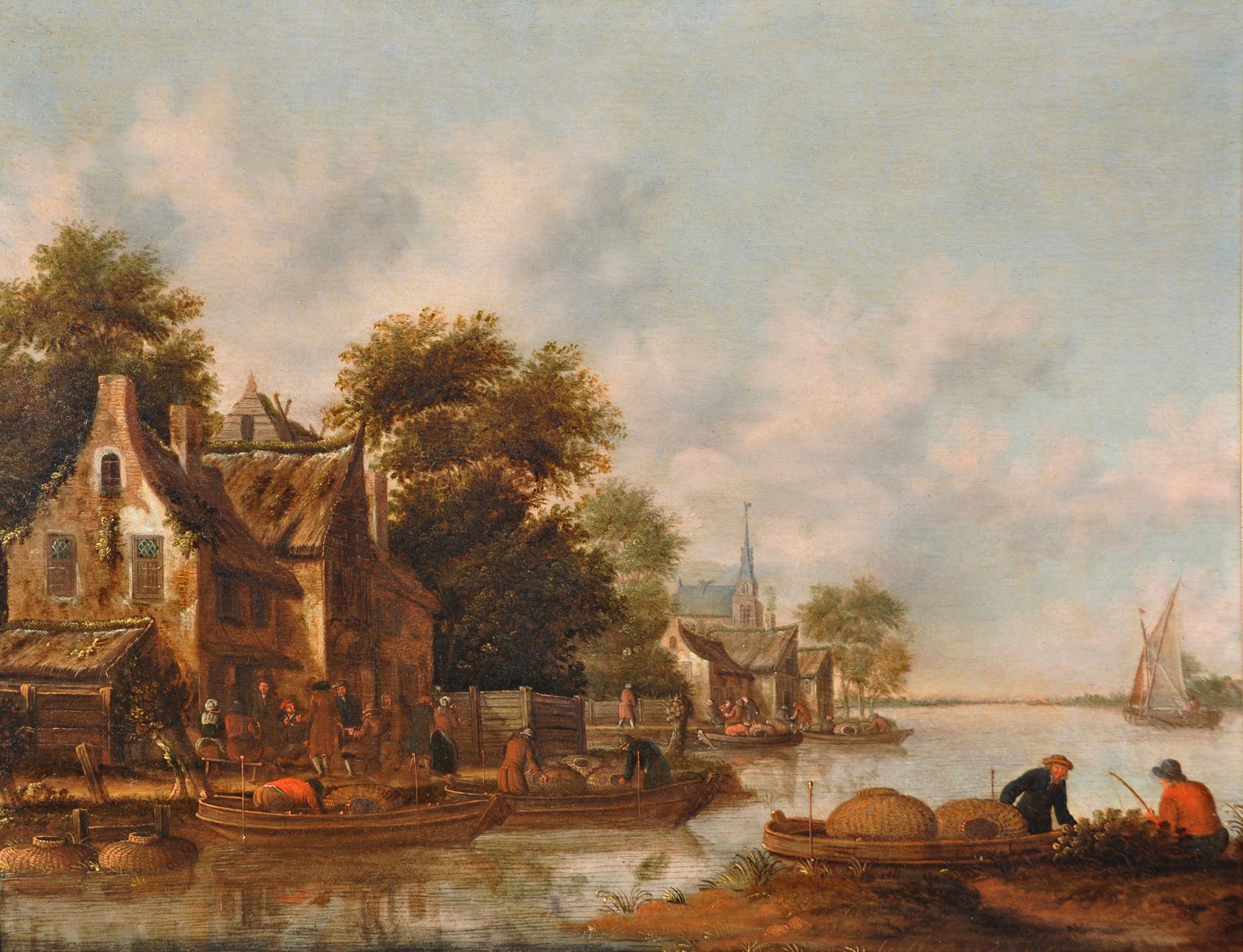 Thomas Heeremans was born in Haarlem, the son of Hereman Thomasz. and Gooltje Maertensdr and was christened in the Dutch Reform Church on 29th May 1641. His exact date of birth is unrecorded but it is known that he gave his age as twenty-five when he acted as best man at a wedding in 1666.

There is a Haarlem 1659 record of him being a pupil of an artist named Everdingen which one can assume must be Caesar van Everdingen (1616-1678), a portraitist and history and genre painter and brother of Allaert van Everdingen who specialised in Nordic landscapes. Allaert had already moved to Amsterdam by this time so Heereman's master must have been Cesar although it is intriguing that the former's oeuvre displays no influence of instruction in neo-classical painting.

Heeremans specialised in canal landscapes and river, village and beach scenes together with some winter landscapes, a few of which had the staffage supplied by Abraham Stork and resemble those of Claes Molenaer (1630-1676) with whom these paintings are sometimes confused. The summer village scenes, which stretch obliquely into the distance, are somewhat redolent of the slightly earlier Haarlem painter Barent Gael and a common theme is figures gathered around an inn. His animated landscapes, which often appear in pairs, show the inspiration of the important Salomon van Ruysdael (1602-1670) and display the classic diagonal construction with a high point and denser colouration to one side descending to a more brightly illuminated low-lying vanishing point at the other side. Sometimes the double diagonal would be employed to emphasise the effect and these techniques would be utilised in Netherlandish art to portray the flat landscape up until the end of the 17th century.

The beach scenes, which particularly depicted those at Egmond and Scheveningen, were animated with many figures and a fine example in the Hague shows Charles II, together with his brothers, the Dukes of York and Gloucester, embarking for England on 23rd May from the beach at Scheveningen in order to repossess the English throne.

It was assumed for some time that this artist was actually Frederik Hendrik Mans as a consequence of the way that usually he signed his paintings. Various contractions were used on his works and although there are instances of THeereMans, more common is THMans and sometimes the close proximity of the first two letters can make the T look like F.

Heeremans married Trijntje Claesdr. from Leiden on 4th December 1663 in Haarlem and they remained together until her death in September 1680. They purchased a house in 1685 and had five children between 1664 and 1673, all of whom were baptised in the Reform Church. He later had another child, a son named Gijsbert and the mother was Sibilla Juriaensdr., a German woman from Marck whom he married after his first wife's death.

He was admitted to the Sint-Lucasgilde in Haarlem (Guild of Saint Luke) in 1664. Like other 17th century artists, Heeremans was also an art dealer and there is a record of a legal dispute between him and a client over an outstanding payment in 1687. The exact date of his death has not been traced but it is recorded that he was buried at the Noorderkhof on 24th January 1694.