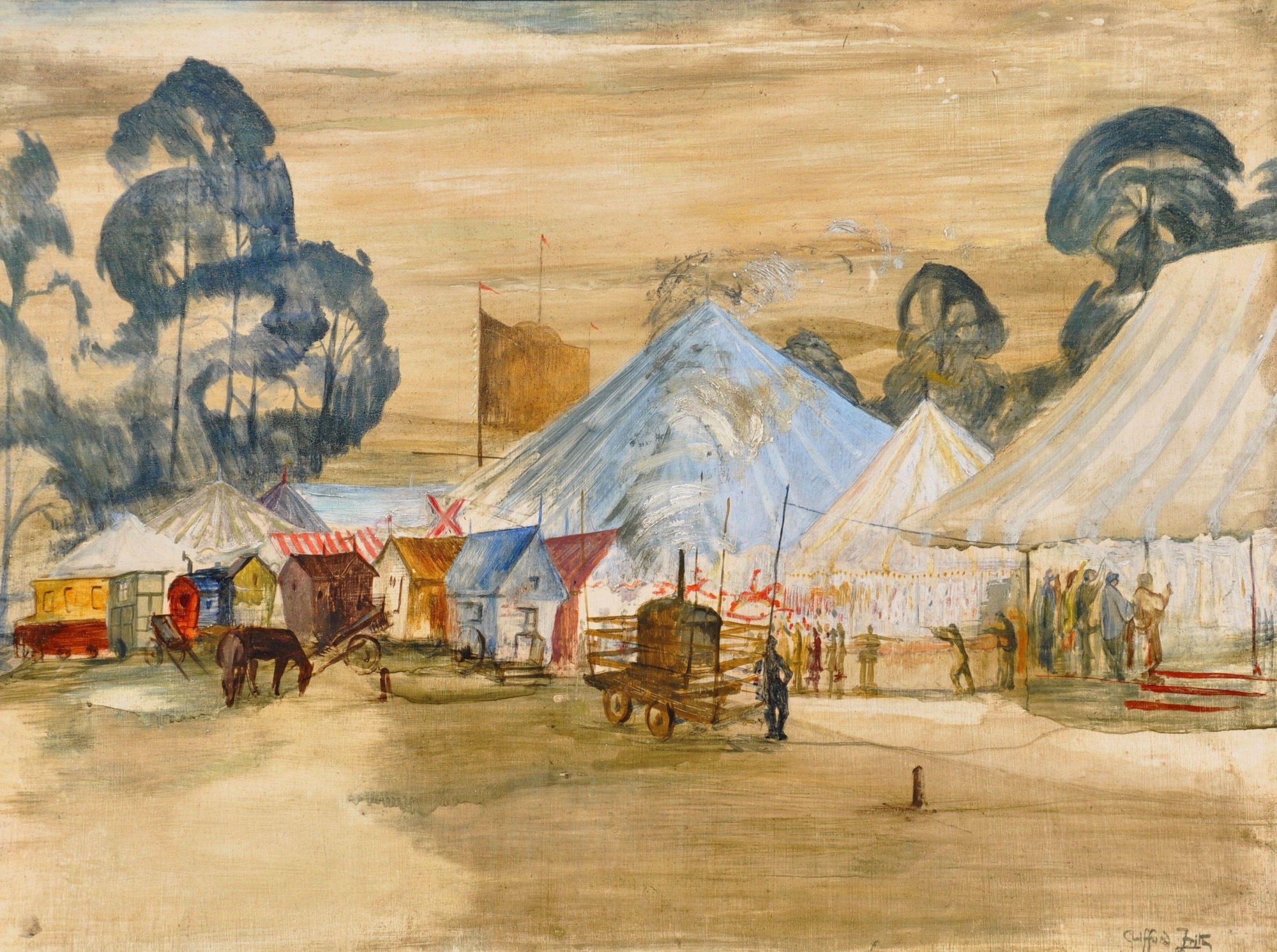 Born in London in 1924, Clifford Frith was the grandson of the renowned historical genre painter and depictor of Victorian life William Powell Frith R.A. (1819-1909) famous for such well-known works as "Derby Day", "Ramsgate Sands", "The Railway Station" and "Private View Day at the Royal Academy".

He undertook his artistic training at the Camberwell School of Arts and Crafts and then at St Martin's School of Art under the instruction of Roland Pitchforth and Victor Pasmore among others at those two establishments and became established as a painter and draughtsman as well as teaching art, returning to work with students at Camberwell and also Goldsmith's College School of Art.

He had started to exhibit regularly at Wildenstein's in New Bond St which was run at the time by Fred Beddington, the brother of Jack Beddington, who was one of the country's leading figures in the advertising world and was the creative director for the Lyons project. The latter had seen Frith's work in the gallery and commissioned him to produce a work for the first series of Lyon's Lithographs which resulted in "Fun Fair", a scene depicting a travelling fair in Harpeneden. He was only 23 when he received the commission making him the youngest artist to work on the series and he said of the technical requirements in producing the painting to be turned into a print that: "I really didn't consider the technical implications of lithography" and because he "…knew very little about the process… went ahead and painted the work that I wanted to do". He later recalled that his finished painting "… had a sketch-like quality" and that he was indebted to "… the skill of Chromeworks in the translation that made it successful". He was later commissioned to produce another painting to be used as a print for the third series of Lyons Lithographs in 1955 and this work was "The River Rother at Rye".

Clifford Frith also exhibited at the Royal Academy and the Redfern Galleries as well as elsewhere and his work was purchased by the Contemporary Art Society. Examples of exhibited works include: "Eirian resting", "The Pearly Lady", "Still Life", "The Thameside, Greenwich" and "The Paragon, Blackheath". Paintings by him held in public institutions and galleries in England include: "Self-portrait" Victoria Art Gallery, Bath, "Boathouse Walk Bridge, Commercial Way", "Saint Giles Church, Southside", "Emmanuel Church, Barry Road" all in Southwark Art Collection, "Julie" Wolverhampton Arts Gallery and "Wapping" in Kirlees Museums and Galleries.

He went to Nigeria with the artist and bohemian Isabel Rawsthorne (she was close to Francis Bacon, Alberto Giacometi and Jacob Epstein among others in England and Jean Paul Sartre and Simone de Beauvoir in Paris) shortly after it gained independence. They worked at the Zaria Art School there and made studies of the people and landscape foe their own work.

Frith emigrated to Australia in 1977 and became well-known there as a sculptor as well as a painter and took part in many exhibitions in his adopted home both as part of a group of artists and as a solo exhibitor. Examples of his work are held in Australian Institutions including the Art Gallery of South Australia, the National Gallery of Australia, Adelaide Festival Centre; Parliament House, Canberra, Adelaide University and Flinders University of South Australia. He also showed his work in Canada.

Artists in Britain since 1945 - David Buckman

In the early and mid 20th century, the Lyons teashops were almost ubiquitous in British towns and cities. From the opening of the first in Piccadilly in 1894, the number of cafés had grown to about 200 sixty years later, and, in addition, they also had hotels and restaurants as well as producing their own brand of cake and tea.

Much of urban Britain was in a damaged state following the cessation of hostilities in 1945 and the country's finances were in a parlous state as a result of a ruinous war. One of the things of which there was a dire shortage was paint and this impacted on businesses that wanted to give a new lease of life to their establishments to reflect the optimism of peace. The directors of Lyons came up with a bold scheme to cover up areas of peeling paint in their premises: they decided to commission art work.

In some respects, this reflected a sensibility that had become apparent in Britain prior to the War. "Art for all" had almost become a mantra and the commissioning of renowned artists to produce work that could be used in advertising in many instances came to replace the graphic artists who would previously have been used. London Underground initiated the change commissioning Graham Sutherland and Paul Nash.and they were followed by Shell Mex and then The School Prints Scheme who between them used artists such as Henry Moore, Ben Nicholson and LS Lowry.

The Lyons prints were overseen by the aforementioned Jack Beddington who selected the artists and subject matter and the first set, published in 1947, was deemed to be "…a novel and intriguing way method of decoration…with no other purpose in mind than that of giving the teashops an interesting and homely experience". Each print was 30 x 40 inches and the three directors of the project were Beddington, the artist, lithographer and RCA teacher Barnett Freedman and Frank Oppenheimer who ran Chromoworks, a commercial printing company.

The 1946 series utilised 16 artists, most of whom had only recently been working as official war artists. The names included Edward Bawden, Henry Moore, LS Lowry, Cedric Morris, Duncan Grant, Carel Weight and Ruskin Spear and the editions of 1951 and 1955, when artists such as Fred Uhlman, David Gentleman, John Piper and John Minton were commissioned, brought the total number up to 40 prints. The artists were free to maintain their style of painting and they were paid between £50 and £150. Furthermore, for the additional items from the print run of 1,500 for each picture that were surplus the Teashop requirements, they received 6d for every one that was sold to the public. Public institutions like the British Council and the Victoria and Albert Museum were also exhorted to purchase complete sets for their collections and the way that they entered the public consciousness gives the sense that although a discreet brand awareness project (the Lyons name was only appeared in small text at the bottom of each print), it was also suffused with altruism which reflected the time.