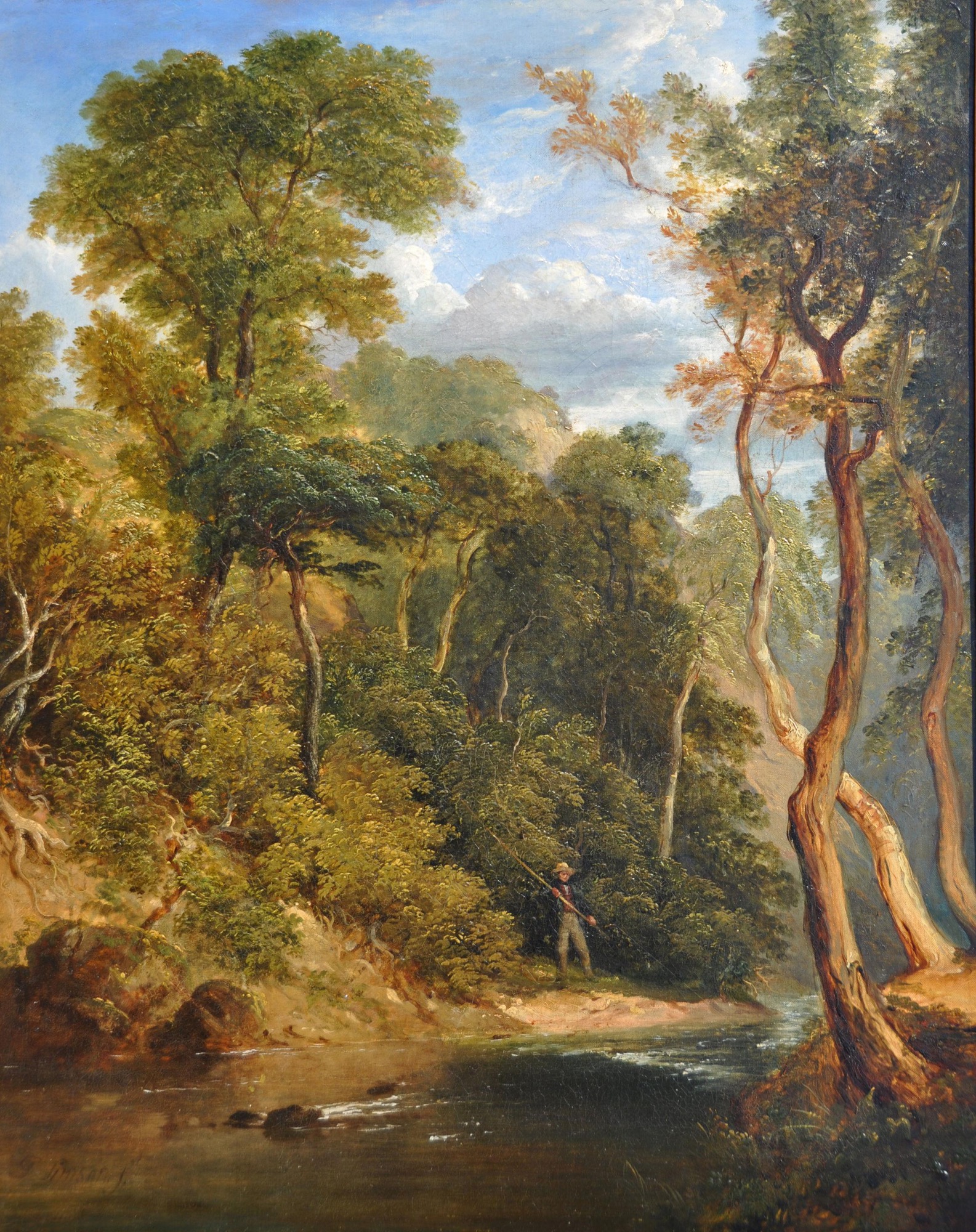 “On the River Esk, Dumfriesshire”

George Simson was born in Dundee, the son of a merchant, in 1791 and had two illustrious siblings, William and David who also became artists and M H Grant writes of them: "… three brothers, all eminent in the Art of Scotland."

He began his career making prints and did not turn to painting until later in life while he was teaching at the Edinburgh Drawing Institution. Upon completing his studies there, he took up a teaching post at that institution. His very first public exhibition, when he contributed works to the Royal Institution in Edinburgh, garnered much attention and praise.

His earlier work mainly comprised genre subjects and portraits (which were often on a small scale but showing the sitter in full length) with some marines and landscapes done usually in oils but also occasionally chalk. Later on in his career he was drawn more to landscape painting and was particularly interested in depicting the ever changing and dramatic effects on water and its interaction with light. The Arran was a favourite subject but other river scenes were portrayed also as well as dramatic and stormy sunsets and moonlight scenes. Edinburgh and its environs also held a strong interest for him and some of these were engraved in 1852.

His diploma work of 1831 was originally entitled "Peasant Girl" but this was subsequently changed to "Girl at a well." He was a Foundation Associate Member of the Royal Scottish Academy but he, along with nine other artists, withdrew their membership after the first meeting. Simson, along with his brother David, established a drawing academy in 1831 and gave lessons from George's home at 54 North Frederick Street, Edinburgh. The prospectus of the Scottish Institution for the Education of Young Ladies in 1841 advertises classes in drawing and perspective at Simson's address. Because of this arrangement, the male and female classes were held at different times and apparently Mrs Simson was "…always present during the ladies' hours of instruction." Simson was held in high regard as a teacher by those he taught in both drawing and painting in oils.

Apart from being a member of the Edinburgh New Philosophical Society, the emerging technology of photography appeared to greatly interest Simson and he was a member of the Photographic Society of Scotland from 1856. Furthermore he established Simson and McCraw in 1858, a partnership with William McCraw and they had already submitted photographs in the 2nd Art Manufacturers Exhibition in December 1857 held in Edinburgh. In the Evening News of 26th December 1857 it was written: "The portraits of Messrs Simpson & McCraw - a new firm that ought strongly to combine both the artistic and mechanical departments - we need not say more than their portraits on porcelain are the only really new examples of photography in the Exhibition, the likeness being excellent and the general arrangement good."
An advertisement read:: "GEORGE SIMPSON, R.S.A., and MR WILLIAM McCRAW, beg to announce the opening of their NEW PHOTOGRAPHIC ESTABLISHMENT, where they prosecute the Art in all its Branches. They intend to direct their attention particularly to P, and hope by the high finish and artistic arrangement of their Pictures to give satisfaction to those who may honour them with their patronage. They also execute Landscapes, Stereoscopic Views and Groups, Copies of Portraits, &c.
The Advertisers beg to request the attention of their friends to the process lately invented and patented by Mr McCraw, by which Portraits are produced on porcelain and other substances."
George Simson exhibited ninety-one paintings at the RSA and was elected a full member of that body in 1829. His exhibited works include such titles as: "Old mills on the Teith, near Collander," "Melrose Abbey from the south-east," "A stirrup cup," "Mountain stream Argyleshire" and "A Suffolk lane."