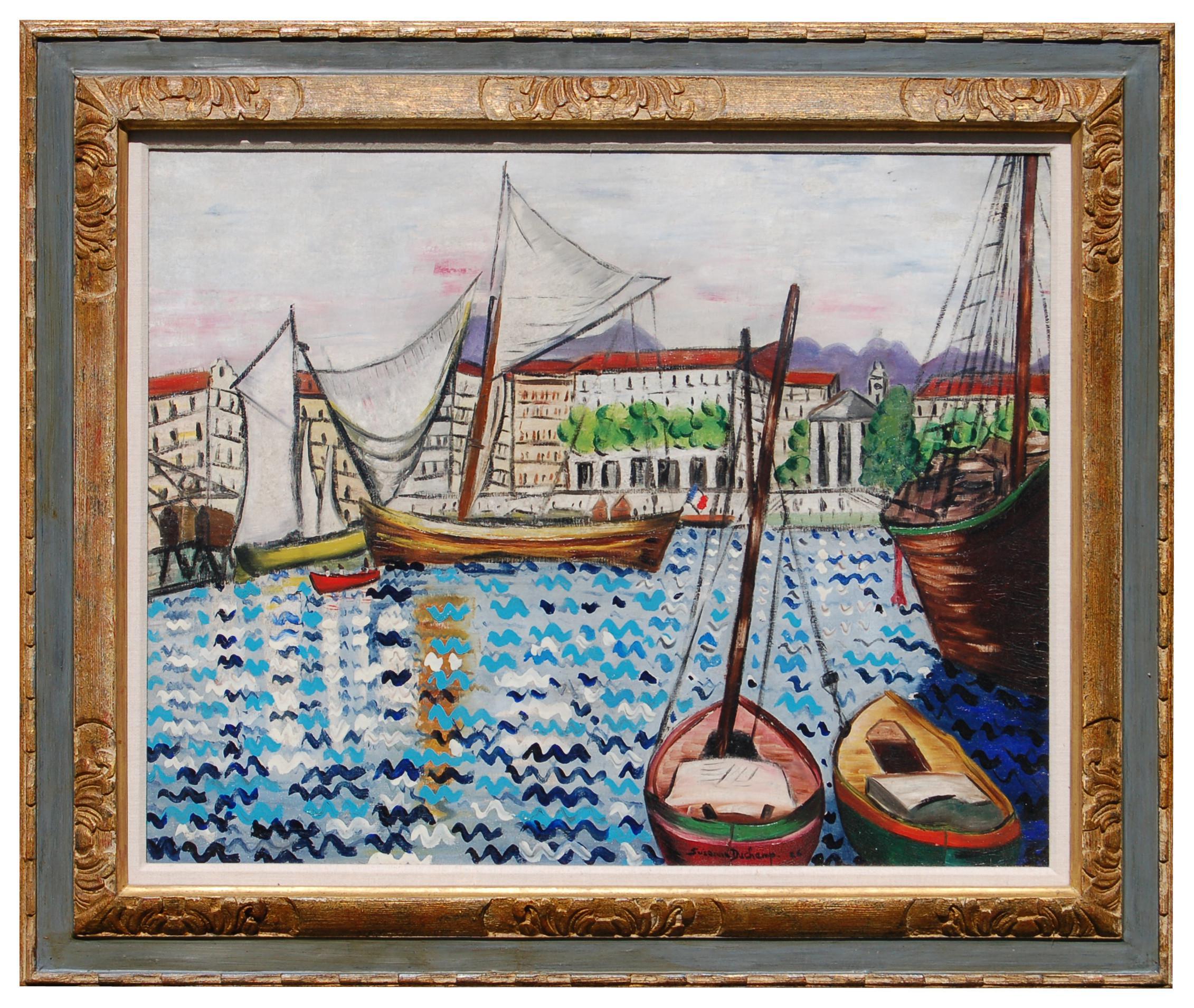 Oil on canvas, signed and dated 26

Suzanne Duchamp was born in Blainville, Seine-Maritime, in the Haute Normandie region, on 20th October 1889 and was a member of a significant artistic family. She was the younger sister of the major Dadaist and Surrealist Marcel Duchamp, the sculptor and architect, Raymond Duchamp-Villon and the Cubist painter Jacques Duchamp-Villon.

She was the fourth of six siblings in all to Eugénie and Lucie Duchamp and Suzanne and Marcel were particularly close from early childhood. He used her as his model in one of his first paintings, "À propos de Jeune Sœur" completed in 1911.

Impressionism and Cubism were her earliest influences when she began painting and studying art at the age of sixteen at LÉcole des Beaux-Arts at Rouen. She showed at La Galérie la Boetie in 1912 but her first exhibited painting was at Le Salon des Indépendants in 1911. The show at the Salon was significant that year because of the controversy over the Cubist influence.

A group of artists comprised of, among others, the Duchamp brothers, André L'Hote, Jean Marchand and Fernand Leger, resolved to set up their own exhibition venue. To differentiate themselves from the Cubist movement in Paris established by Picasso and Braque, they formed "Section d'Or" also known as Groupe de Puteaux after the Paris suburb of the same name and the style of their Cubist art became known as Orphism. The former title was the inspiration of Jacques Villon and came from the Leonardo da Vinci treatise on painting in which the golden section mirrors mathematical proportions and geometric configurations that appear in nature.

Suzanne Duchamp exhibited at the inaugural show in 1912 but with the outbreak of the First World War in 1914, the venture came to an end although she continued to exhibit at Le Salon des Indépendants until the start of the war. She had been married at twenty-one to a pharmacist but this union was very short-lived and she went to live near her brother Marcel in Montparnasse.

During the war, she worked as a nurse in Paris and did not resume painting until 1916. This was precipitated by the return of the painter Jean Crotti to Paris who bore news of Marcel Duchamp's success in New York and the inspiration that it imparted on the Paris art world.

Jean Crotti and she were married in 1919 and she became a significant influence on his work. Her brother Marcel presented them with a wedding present which comprised instructions to create an art-piece formed from a geometry textbook suspended on the balcony of their home, allowing it to be gradually destroyed by the wind and rain. This was typical of the Dada movement which had sprung up in Paris in the latter part of that decade.

Dadaism was a cultural movement which had originated in Zurich and involved art, art theory, graphics, design, poetry, theatre, literature and visual arts. It also espoused public gatherings and demonstrations and was strongly pacifist in tone. It became hugely influential on the avant-garde movement, pop art, surrealism and nouveau réalisme and re-emerged as a force behind the culture of the 1960's. The iconic photographer and artist Man Ray photographed Suzanne Duchamp circa 1924 and it can be seen in the Museum of Fine Arts in Houston.

This was the direction now taken by Suzanne Duchamp and her circle. The works that she, Marcel, Jean Crotti and others produced had a mechanical aspect but combined with a fragile grace. This is embodied in her works of 1920: "Ready-made malheureux de Marcel" and "Ariette d'oubli", the first of these inspired by Marcel's wedding present. She also completed "Multiplication brisée et rétablié" between 1918 and 1919. This classic Dadaist work in paint, collage and writing, brings together images and text in several layers to construct a very complex visual and verbal metaphor. It is in the collection of the Art Institute of Chicago and has been included in a recent exhibition staged at the Museum of Modern Art in New York, the National Gallery of Art in Washington and the Pompidou Centre in Paris.

In 1921, she held an exhibition with Jean Crotti and in 1923, had a solo show of her work. However mainly after 1945, she returned to producing more realistic, figurative and traditional works somewhat influenced by Raoul Dufy, entering them in exhibitions at Le Salon des Indépendants, Salon d'Automne and Le Salon des Tuileries.

Suzanne Duchamp died on 11th September 1963 in Neuilly-sur-Seine but her work was featured retrospectively in two major shows. In 1966 in Exposition Dada held at the Musée Nationale d'Art Moderne in Paris and in 1967 in "Les Duchamps: Jacques Villon, Raymond Duchamp-Villon, Marcel Duchamp, Suzanne Duchamp". The last was put together by Marcel Duchamp and was staged in Rouen and then in Paris.