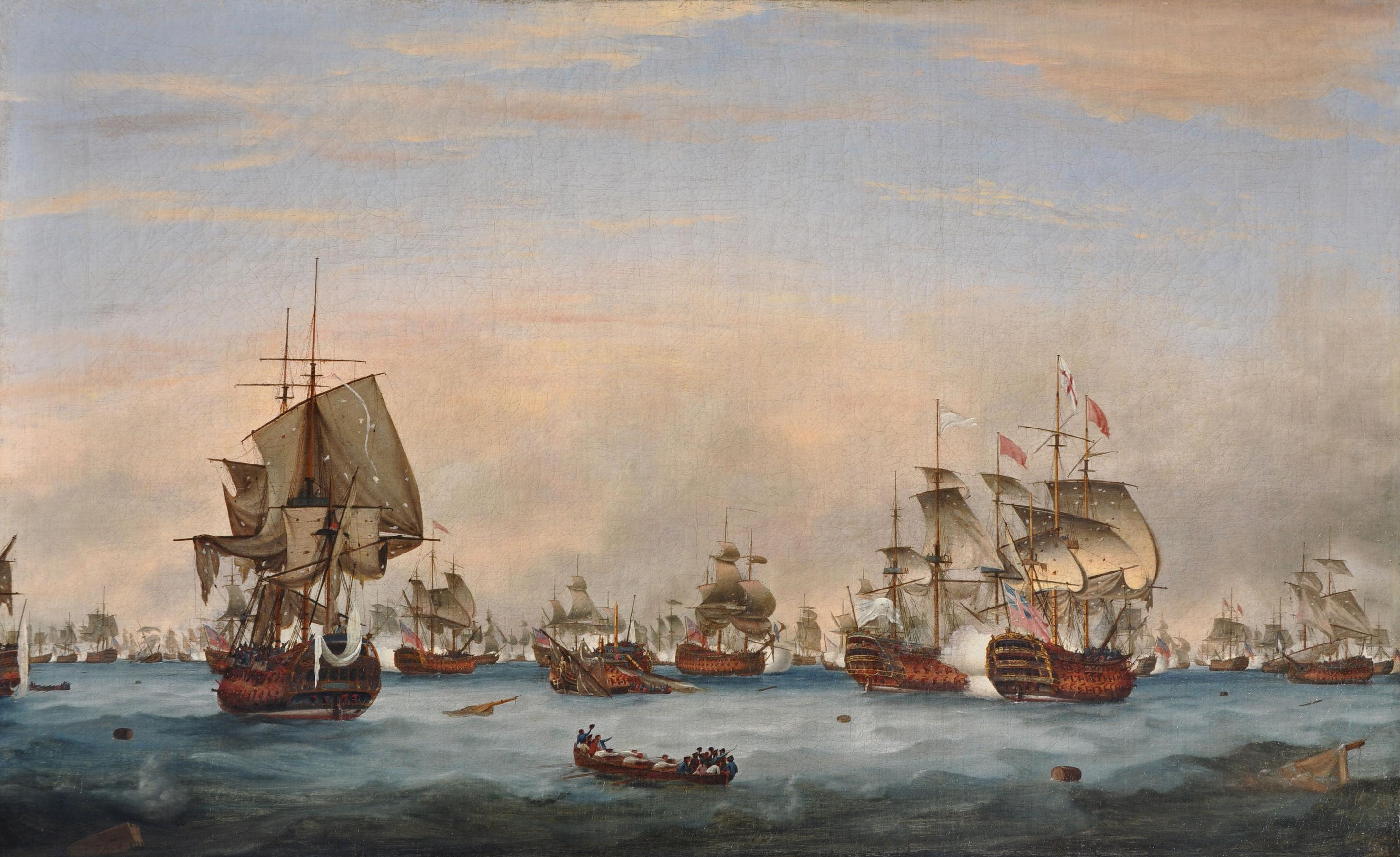 This painting depicts on the far left the Destin (probably) with the dismasted Glorieux in the near centre. To the left, HMS Barfleur, which is flying Rear-Admiral Hood's distinguishing red flag at the mizzen, is engaging the Ville de Paris.

The Barfleur was a Second Rate 98 gun ship designed by Sir Thomas Slade who also designed the Victory. The Barfleur was built at the Royal Dockyard in Chatham, weighed 1944 tons and had a crew of 750.


Described by Grant as "… a noted marine painter", this prolific and dedicated marine artist produced a body of work that was on the borderline between marine paintings of ships and ship portraits. He became one of the well-known artists from the golden age of British marine painting, which included such others as Peter Monamy, Francis Holman, Nicholas Pocock and Thomas Luny. E H H Archibald places him in the top three of great marine artists of that period.

His range of work embraced naval engagements, ship portraits, coastal scenes with shipping and ships at sea in fresh breezes and storms. The topography of the background is interesting and well observed and the depiction of the ships themselves detailed and technically very correct, a legacy of time spent in dockyards studying the subject matter.
The backgrounds are delightfully atmospheric and, like many British marine artists of the 18th and 19th century, Whitcombe favoured a dark foreground.

He lived in London during his exhibiting career at addresses in Covent Garden and Somers Town, among others. Some exhibited titles include: "Destruction of the Spanish floating batteries at Gibraltar, September 13, 1782 at night", "East Indiaman off the Coast of Good Hope", "The Victory sailing out of Portsmouth Harbour", "The Trinity Yacht with a view of the light houses on the Caskets".


The Battle of the Saintes was a significant engagement between the English and combined French and Spanish navies and was part of the American War of Independence. Known to the French as La Bataille de la Dominique but to the English as the Saintes, after the group of islands between Guadeloupe and Dominica in the West Indies, it took place from 9th to 12th April 1782.

The French fleet, under the command of the Comte de Grasse, had been blockading the British Army at the Siege of Yorktown which had led to the surrender of General Cornwallis's force. This had been one of the objectives of the "De Grasse - Saavedra Convention", a strategy that had been worked out in October 1781 between the French Admiral and Francisca Saavedra de Sangronis who was the aide to Bernardo de Galvez, the Spanish Governor of Louisiana. Their objectives were to conquer Jamaica, capture the British-held Windward Islands and assist the Americans defeat the British naval squadron based in New York leaving them to divide the territories and trade between them.

Following the success at Yorktown, De Grasse's fleet set sail to the West Indies, contributing to victories at St. Kitts, Montserrat, St Eustatius and Demerary before arriving at Saint Domingue to prepare for the taking of Jamaica. Jamaica was of paramount importance to the British economy and was worth more by itself than the thirteen American colonies and the French and Spanish had decided that they could inflict far more damage on Britain by taking the island than their failed attempt to wrest Gibraltar from British control. The Admiralty, appraised of the significant threat of the combined French and Spanish fleet, sent reinforcements under Admiral Sir George Rodney.

As soon as Rodney arrived, he reorganised the logistical supplies to the Fleet and set about disrupting the French supplies and reinforcements. On 7th April the French fleet, numbering thirty-three ships of the line, weighed anchor from Fort Royal in Martinique. This fleet was supported by more than one hundred cargo supply vessels and was to rendezvous with the Spanish force of twelve ships of the line. The intention was to combine with the 15,000 strong army at St Domingue which would be landed on the north coast of Jamaica at the start of the invasion.

Rodney received the news of the French departure the following day and immediately sailed from St Lucia with his fleet of thirty-six ships of the line to intercept the French. The British ships, with their copper-plated hulls, had a distinct speed advantage with favourable winds and the following day surprised de Grasse by how soon he had been caught. A partial engagement ensued in which the French made an initial gain but relinquished it soon after and running engagements continued over the next three days with both sides suffering damage to ships which had to be repaired at sea.

On the morning of the 12th, the two fleets lined up parallel to each other which was typical of naval engagements of the time. Both sides exchanged broadsides as they passed but a shift in the wind direction allowed Rodney in his flagship HMS Formidable with others, which included HMS Bedford and HMS Duke, to sail directly at the French centre and Rodney engaged de Grasse's flagship, the larger 104 gun Ville de Paris. The other British ships followed on and inflicted huge damage on the French ships and caused considerable casualties. This piercing of the French fleet became known as breaking the line and it is believed to be the first time that it was employed. The consequence was that it bewildered the French and threw them into utter confusion.

The wind changed direction again separating the French fleet and the British were able to sail through the lines firing broadsides at the French sterns and bows which had no cannon there with which to respond.

When the Ville de Paris, isolated and battered by severe cannon shot, struck her colours sometime after 4.0 pm, the battle was effectively over. Hood boarded first to accept the surrender and witnessed the horrific carnage on board the flagship. All of de Grasse's officers were dead or wounded although the Admiral himself was remarkably unscathed.

Some French ships did manage to escape but it was still a crushing defeat for France and effectively saved Jamaica from invasion. The French casualties have never been quantified but just on the Ville de Paris, over 400 crewmen were killed and more than 700 wounded whereas the British lost overall 239 or 243 with between 762 and 816 wounded (depending on sources). It is estimated that there were over 3,000 French dead with more than 5,000 captured. Four ships of the line were captured and one destroyed and in Rodney's ensuing chase of the escaped French ships between the 12th and 19th, a further seven ships of the line and a frigate and a sloop were also captured.

The Battle of the Saintes became a famous victory and was popular with the leading marine artists of the time who were commissioned by captains and officers who were involved to depict the battle. Thomas Whitcombe painted several versions, one of which is in the National Maritime Museum. Rodney became a patron of Dominic Serres who was commissioned by the Admiral to depict his successes in the West Indies including the Battle of the Saintes and Serres also produced several versions of the Battle, one of which was in Ickworth House. Other artists who portrayed it included Richard Dodd, Thomas Luny, Richard Paton and William Elliott.