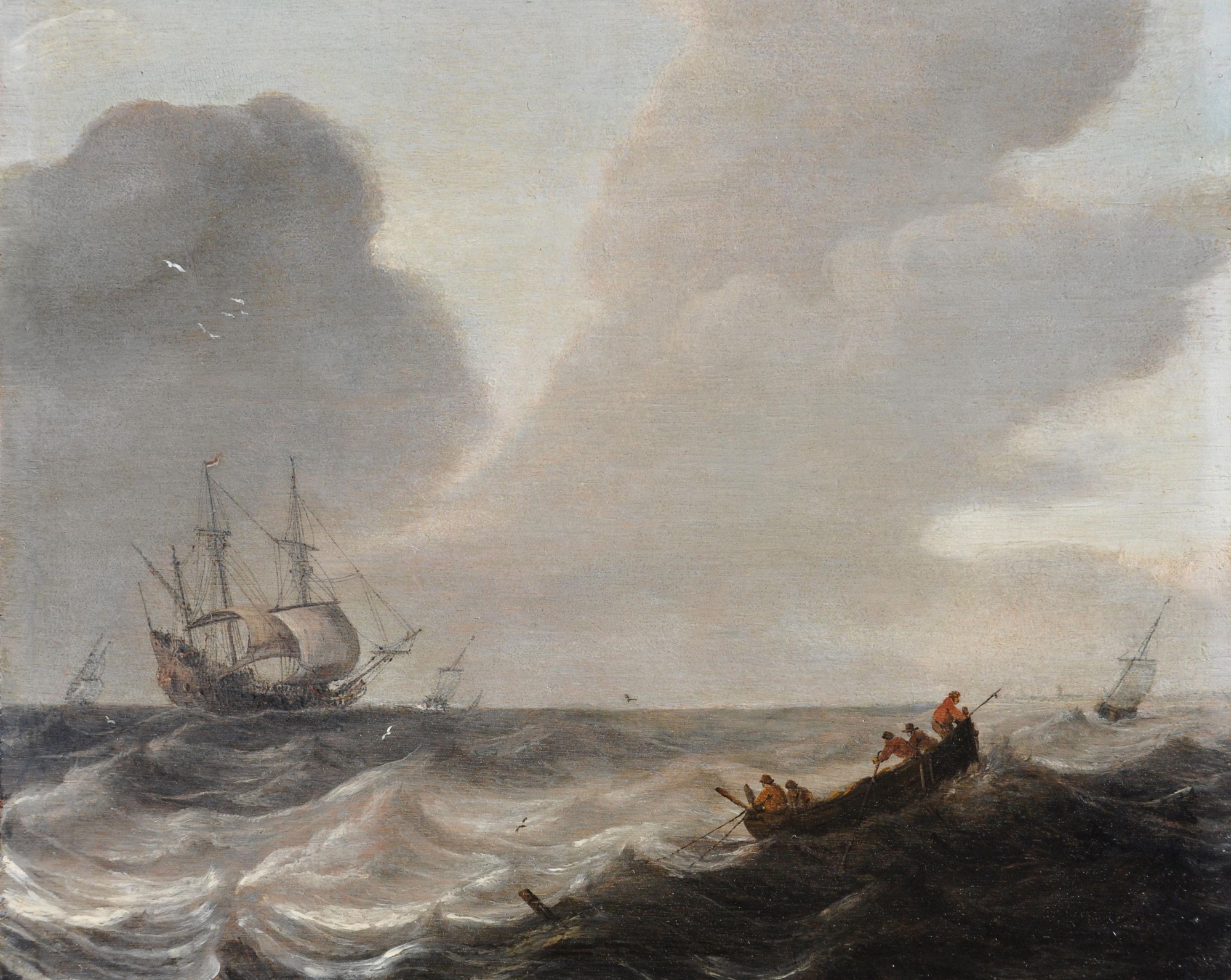 Pieter Mulier was a Golden Age marine painter who utilised the grey tonal palette of the Dutch realist school. He seems strongly influenced by the work of Jan Porcellis (1584-1632) with silver-grey sea, low horizon, clouded skies and perspective depth achieved with defined small boats in the foreground. Although the exact date of Mulier's birth is unknown, he would have been young to have been apprenticed to Porcellis but it is possible. The art historian L J Bol believes that the young Mulier trained in Rotterdam under Simon de Vlieger.

Mulier, unlike Porcellis, did include views of the coast in some of his paintings but the central theme is the interaction of the sea and weather and in this he follows in the tradition of Jan van Goyen and Saloman van Ruysdael who concentrated so intensely on tonal developments in their landscapes. Like his contemporary, Simon de Vlieger (c.1600-1653) who was a pupil of Porcellis, Mulier depicted coastal and estuary scenes, often observed from the dunes. Squally weather is a recurrent theme and the utilisation of diagonal cloud formations gives the impression of brewing storm clouds and scudding rain. The silver-grey tones of the soft, hazy atmosphere are counterbalanced by a dark grey background which can be quite hard. In this painting, there is a thin layer of bright glazes on the horizon which suggests a break in the conditions with a promise of an imminent sun breaking through. In some other paintings, the predominant grey tones are softened by warmer bluish-mauve and pink.

The works by this Haarlem-based marine painter are closely related to those of Simon de Vlieger and Jan Porcellis and are set around the Zuider Zee and other estuaries in the area. Typical motifs of his are fishing boats in a stiff breeze on the open sea and his storm scenes, with their long, rhythmic seas, are redolent of those of the Amsterdam painter Claesz Wou (1592-1665) although the colouration is different, Wou preferring a greener palette.

Pieter Mulier was born in Haarlem and seems to have remained there all his life, dying there on 26th May 1659. His family were believed to have been cloth weavers emanating from Flanders and being Protestants, had fled to Haarlem like so many others had done from the Spanish in the Eighty Years' War, as it was controlled by the Protestant William of Orange.

In 1638 he was admitted to the Guild of St Luke which had originally represented not only painters, illuminators, muralists, carvers and sculptors as well as dealers and art lovers but by the 17th century it was mainly controlled by artists. He had married in 1635 and had at least two children, one of whom, trained by his father and also called Pieter, became the landscape and marine painter known as Tempetsa from when he worked in Italy and was given the sobriquet due to his dramatic depiction of clouds and storms. The landscapist Frans de Hulst (c.1610-1661) was also another of Mulier's pupils.

Most of his paintings are signed with a linked monogram PML or the letters PMLIER which should avoid confusion with the early works of Jan van Goyen, Jan Porcellis and Simon de Vlieger

Museums where his work can be seen include: Rijksmuseum, National Maritime Museum in London; Gateshead Museum, Bredius Museum in the Hague, Gemeentsmuseum in Arhem, Shipley Museum, University of Edinburgh, Cologne, Staatliche Kunstammlungen in Dresden, The Hermitage in St Petersburg, National Gallery in Prague, Metropolitan Museum of Art in New York, Museum of Fine Arts In Boston.