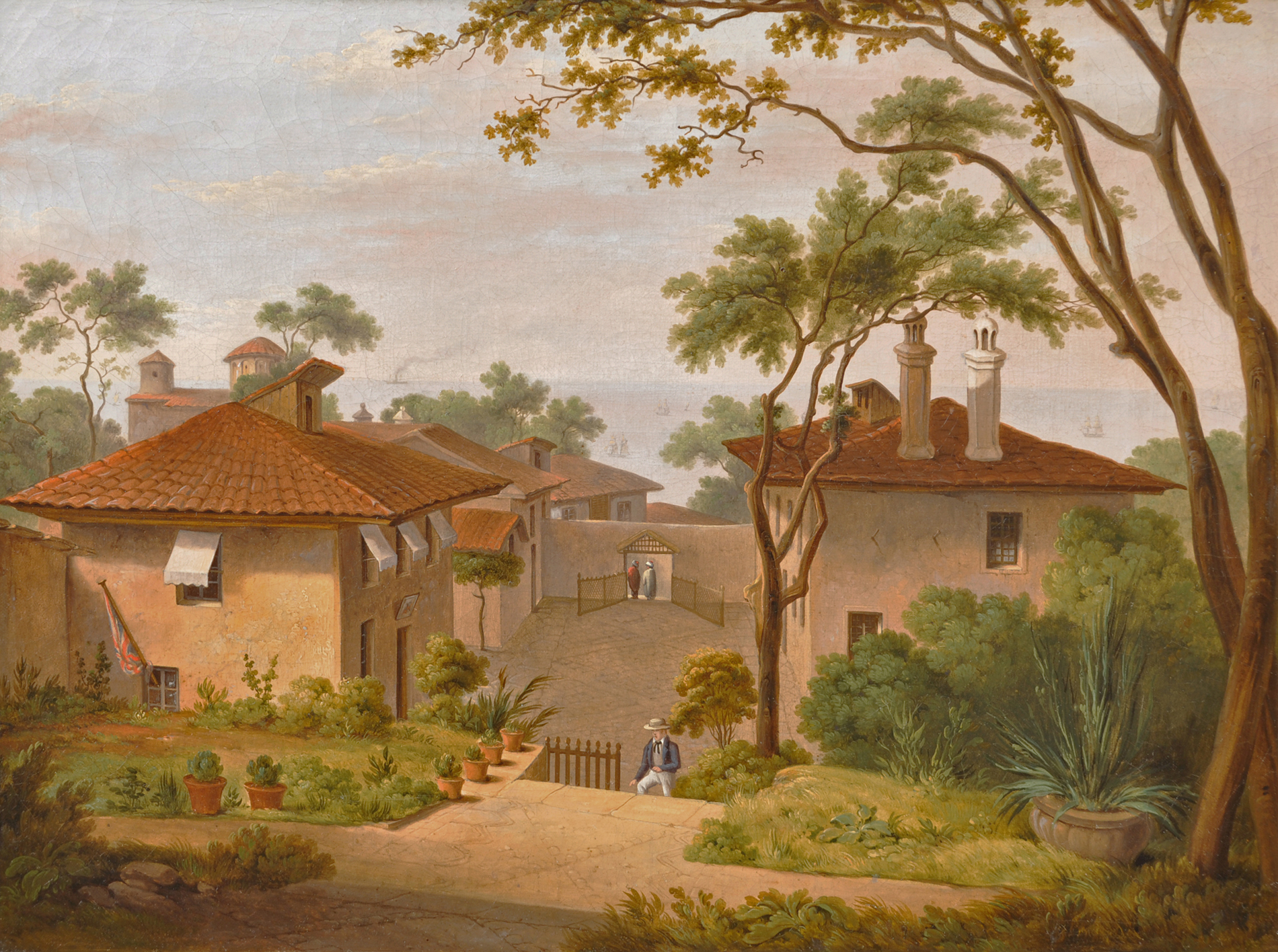 Oil on canvas, inscribed on label on reverse

Trebizon (or Trabzon), is situated on the Black Sea coast in north-east Turkey and being located between the Caucasus to the north and Persia to the south, became a significant stop on the historic Silk Road.

It had been founded by Greek colonists in the time of Xenophon and later, as a remote capital of a Roman province, owed much of its strategic importance and subsequent wealth to the Emperor Hadrian who constructed an artificial harbour. Protection on the landward side was afforded by a double line of walls and towers which over subsequent centuries were incorporated into the strengthening of the fortifications by Christians and Turks. That part of western Asia Minor had always been volatile and as marauding tribes ravaged the countryside, Trebizond became a place of refuge, particularly for the wealthy. It had been autonomous for long periods aided by its defensible topography, natural and man-made harbours and wealth, a consequence of having accessible copper and silver mines and it was situated far enough away from the western and eastern Roman centres of power to be relatively untroubled by them.

By the late 2nd and early 3rd century AD, there was a fleet of ships in the harbour for protection against pirates and the garrison was bolstered by 10,000 men and combined with the Greek easy going nature, a sense of impregnability ensued followed by indolence. This ended with an invasion by the Goths - who had established a kind of kingdom on the Cimmerian Bosphorus and had plundered most of the Black Sea coastline by 260 – who with a clever strategy breached the defenses and left the city in ruins.

It then sank into a period of relative obscurity for almost 1,000 years when it grew again into the small Empire of Trebizond, or Trapezuntine Empire, which constituted the north-eastern corner of Anatolia and the south of Crimea, and was a successor of the Byzantine Empire. It was established by the Georgian queen Tamar in 1204, shortly before the sack of Constantinople and endured through to the 15th century. The towns bordering the Black Sea in north-eastern Turkey were comprised of an ethnically diverse populace and Marco Polo had noted that: (they) “…reside in the cities and fortified places and gain their living by commerce and manufacture.” As well as the Turkic inhabitants, there were also large groups of Armenians and Greeks. The latter, were for the most part the descendants of the second wave of Greek settlers who had arrived between the early 13th century and the mid-15th while the latter were the vestige of Greater Armenia which had been vanquished by the Seljuks in the 11th century. The Greeks often formed the entire population of villages in the area whereas the Armenians tended to be in more scattered communities. Trebizon and its immediate environs bear Greek place names and a dialect, peculiar to the place, known as Trebizon Greek which was spoken well into the 20th century.

Its eminence as a trading hub continued to flourish and items such as linen, silk and woollen fabrics were brought to the port by Genoese and Venetian merchants who established bases there and the town became populated by a diversity of languages, cultures and religions, many of whom benefited from the accrued wealth. However its comparative remoteness from Western Europe fostered a sense of the exotic and travellers brought back tales of the wealth ensuing from the nearby silver mines, its exotic atmosphere and for the beauty and sophistication of the women.  Robert Curzon wrote that: “Trebizond, so famous in the middle ages as the residence of magicians, enchanters and redoubted heroes of chivalry, is better known in the pages of romance than for any facts of historical importance which occurred there during many centuries”.

The Italians, particularly in relation to navigation but also in more quotidian conversation, have the expression perdere la Trebisonda which means to be confused or lost. Trebizond is mentioned several times in literature and in the opening chapter of Cervantes’ Don Quixote, the protagonist, who can be seen as an allegory of European expansionist aspiration, is described as pursuing his chivalric mission because:  “…already the poor man fancied himself crowned by the valour of his arms, at least with the empire of Trebizond”. François Rabelais, in Gargantua and Pantagruel, another satire of futile dreams, has the Picrochole, the Piedmont ruler, state that “I want also to be Emperor of Trebizond” as heir to the Roman Empire, an empire that Virgil had predicted would have no limits in time or space.

Britain had been looking to forge stronger commercial links with the Ottoman Empire from 1825 and whereas prior to this date British merchants had preferred the ports of Poti and Redout Kale on the coast of Georgia to transport goods to Tabriz in Persia, by the early 1830s, with relations between Russia and Britain becoming strained, it seemed logical to utilise the ancient caravan path from Trabzon to Tabriz via Erzurum. Apart from the fact that it was considerably shorter than the onerous trans-Caucasus route, it also had the advantage of running entirely through Ottoman lands rather than territories under Russian influence.

In 1829, Turkey and Russia signed the Treaty of Adrianople which had established the opening of the Turkish Black Sea ports to foreign shipping. The government in Britain took advantage of this lifting of restrictions to further their own trade links. The consulate in Trabzon was the consequence and it opened in 1830.

The souring of relations with Russia were as a consequence of its expansionist foreign policy in the early 1830s and Britain sensed a threat to India, their colonial jewel, as well as to Afghanistan and Persia which served as buffer states. In 1838 the British government sent an advisory diplomatic message to Russia stating: “Great Britain has regarded Persia as a barrier for the security of British India against attack from any European power. With this defensive view Great Britain has contracted an alliance with Persia and the object of that alliance has been, that Persia should be friendly to Great Britain, independent of foreign control, and at peace with all her neighbours”.

Despite the friction between Britain and Russia, they were both part of a peace treaty initiated by the Turks and Persians. The caravans carrying trade goods westwards passed along the borders of Turkey and Persia and were constantly attacked by Kurdish bandits led by such as Beder Khan Bey. This affected everybody who profited from the trade so the two European powers were requested to put a stop to the plundering and all parties benefited.

James Brant, a seasoned merchant based in Smyrna (now Izmir), was appointed as Britain’s Trebizond vice-consul in 1830, a post he held until 1836, on a salary of £200 per annum. The stated aim of this move was the “…the making of Trebizond a depot for the Persian trade”. Brant had been admitted to the Smyrna Company in 1813 and had become a well-established merchant there. An office in Old Broad Street in London has him listed in Lee and Brant, Turkey merchants in 1817.

Susan Heuck Allen writes that for the most part, consular duties were not of a strictly diplomatic nature. Consuls and vice-consuls were political agents, officers of the government that they represented. The post had broad and considerable responsibilities so they were entitled to certain privileges and also almost all of the immunities enjoyed by diplomats. For example, they could avoid prison save for the most heinous crimes. They were there to intercede on behalf of their countrymen in any civil and criminal cases so often acted as interpreters while continually trying to further the influence of Britain. She goes on to write that: “In Western Asia Minor, those consuls or vice-consuls who had the arms of a foreign power emblazoned over their door had attained the highest social position possible locally, one that entitled them to appear on public occasions in uniform and to be attended by armed guards, or kavasses. ‘In fact,’ wrote one observer, ‘the post of consul in Turkey is more important than that of ambassador at any European court, on account of the unlimited power they exercise independently of the Turkish laws’”.

Trebizond became the principal port for the export of goods from Persia in the first half of the 19th century, a state that lasted until the opening of the Suez Canal and one of the earliest photographs of the city shows one of the last camel trains emanating from Persia in the mid-1860s. It became, together with Smyrna, Salonika and Constantinople, one of the main conduits of western influence, both culturally and technologically, into the Ottoman Empire. The American Board of Commissioners for Foreign Missions opened in 1835 and multiculturalism thrived with new mosques, churches and schools for different nationalities appeared.

By the middle of the 19th century, it had become easier for topographical painters to travel to the Orient and there was a choice of well-established routes. Constantinople was a destination for many and could be reached by taking a boat the length of the Danube and on into the Black Sea rather than the more traditional route of journeying to Marseilles, usually by boat from Southampton, before sailing the length of the Mediterranean. The eastern end of the Mediterranean marked the westernmost limits of the Ottoman Empire which had included the whole of Greece until 1820. Although artists had been enamoured of Roman ruins, very few had ventured into Greece and beyond before the late eighteenth century. This was partly a consequence of religious suspicion of the Muslim world but also a belief that Greece and the environs were an impoverished and desolate wasteland which bore no relation to the elegant and ordered world depicted in the classics.

Robert Curzon, writing of his time in that area of the Black Sea in 1843-4, demonstrates how Trebizond had become a relative oasis in a wild land when he describes his departure from the city: “At last we were ready; the Russian Commissioner travelled with us, and we sallied out of the town in a straggling line, up the hill, along the only road known in this part of the world. This wonder and miracle of art extends one mile, to the top of a little hill. It ascends the mountain side in defiance of all obstacles, and is more convenient to rolling down than climbing up, as it is nearly as steep as a ladder in some places. When you get to the top, you are safe, for there is no more road as far as Tabriz. A glorious view rewards the traveller for his loss of breath in accomplishing the ascent. From hence the road is a track, wide enough for one loaded horse, passing through streams and mud, over rocks, mountains and precipices, such as I should hardly have imagined a goat could travel upon; certainly no sensible animal would ever try to do”.

The Great Sea; A Human History of the Mediterranean – David Abulafia

Armenia: a year at Erzfroom and on the frontiers of Russia, Turkey and Persia – Robert Curzon (published 1854)