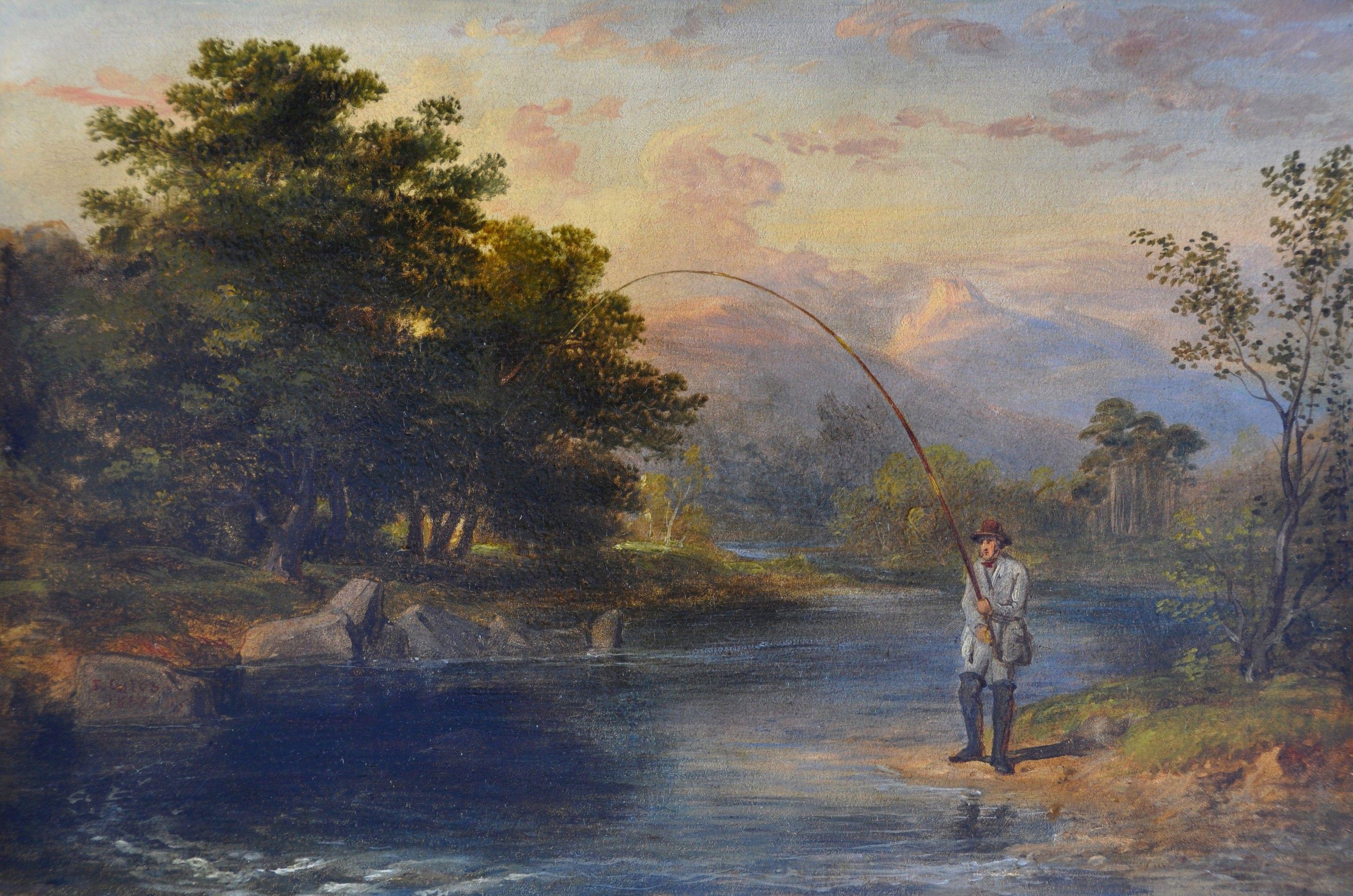 James Giles was born in Glasgow in 1801, the son of a textile designer. It appears that the family moved to Aberdeen when he was comparatively young as he studied at the Aberdeen Art School and he spent most of his life there, sending his paintings for exhibition from an address in Bon Accord Street.

Giles had shown an early aptitude for painting and was decorating the lids of snuff boxes with animal and human portraits when aged only thirteen. While he was studying anatomy he was also teaching drawing at the Aberdeen public drawing classes and when not engaged in either of these, would venture out into the Highlands to sketch from nature.

In 1823, he made a very advantageous marriage to Clementine Farquharson which gave him the financial stability and support to travel abroad to both study and paint. He went first to London where he received his first formal art instruction and then to Paris to train under the French history painter Jean François Regnault. After that, he spent a year travelling through Italy where he made forty copies of Old Master paintings which were exhibited in the Ashmolean, Oxford in 1970.

His Italian journey started in 1824 where he went to initially to Genoa via Toulon and Marseilles. From there he travelled to Florence, Siena and then Rome where he spent Christmas 1824 and then on to Naples before making his return to Scotland by way of Venice and Switzerland. A critic wrote of him: "The many watercolours he made on this trip reveal his ability as an artist with a delicate but sure touch and sense of light and shade." Sparrow says of him: "A sensitivity to atmosphere and effects of sun and cloud and storm and the power of rendering his impressions freely and directly that remind one inevitably of Turner at his best and boldest…his sky studies are strikingly original…" Some of these watercolours were subsequently worked up into large oils.

Back in Scotland he founded the Aberdeen Artists Society with Archibald Simpson in 1827 and in 1829 he became one of the original twenty-six members of the Royal Scottish Academy was also awarded the Hope and Cockburn.in that year. He continued painting topographical pictures, principally in watercolour and at this time he developed an interest in landscape gardening resulting in his advising the Earl of Kintore and the 4th Earl of Aberdeen for Haddo House. The latter also commissioned eighty-five drawings which were later published as, "Drawings of Aberdeenshire Castles," in 1936.

Giles's friend Hugh Irvine was instrumental in introducing him to many local lairds and commissions ensued. In 1839 the 2nd Duke of Sutherland commissioned him to produce watercolours of his huge estate. Queen Victoria then instructed him to capture a likeness and perspective views of the original castle of Balmoral in 1852 to enable the royal couple to decide as to its purchase.

He painted many Highland landscapes, particularly around upper Deeside, although the travels through Italy yielded several paintings reflecting his experiences there. He is probably best remembered for Scottish sporting subjects showing shooting and angling and these would be set in the Highland landscape. Ensuing from these would be studies of the animals involved and still-lifes of the caught fish for which he was particularly renowned and it helped that he was a particularly keen angler. He was keen on painting deer and realising that to fully understand his subject necessitated considerable and intimate study of his subject, he turned himself into a highly accomplished stalker. He was a close friend of Sir Edwin Landseer and together they made sketching trips. His depictions of big cats are rare but he showed two at the RSA: "Lion disturbed at his prey - sketch from nature" in 1856 and "Panther - sketch from nature" in 1858.

His brother, John West Giles, lived for a time at Bon Accord Street in Aberdeen but in 1838 he had moved and seems to have spent most of his professional life in London apart from a return to Aberdeen in 1844 and a brief period in Stamford in 1859. He painted similar highland sporting scenes and landscapes to those of his brother but was also a lithographer of sporting scenes and pedigree stock.

For many years he has been called James William Giles but this is now known to be erroneous. In addition to his painting and garden design, he also designed the sculpture "Demeter" which sits atop the Aberdeen branch of the Clydesdale Bank in Castle Street and perhaps more unusually, damask table linen for Queen Victoria. It is said that he turned down a knighthood on two occasions.

James Giles exhibited three hundred times at the Royal Academy of Scotland, twice at the Royal Academy, eighty times at the British Institute and thirteen times at the Royal Society of British Artists in Suffolk Street in London. Titles of exhibited paintings include: "Salmon Pool at Kinloch", "Day's Fishing", "A Falconer", "Pliny's Villa, Lake of Como", Lago Averno, looking towards the Ruins of the Temple of Apollo", "Otter Hunting", "The Angler's Enemy holding a Trout", "a Roe Deer disturbed", "A Royal Hart and Hind in Balmoral Deer Forest", "Mr J A Sandiland's King Charles Spaniels" and "Fish".

The Aberdeen Art Gallery has many of his works in its collection and the National Gallery of Scotland has two of his landscapes and further examples are in the British Museum, the museum in Melbourne, Castle Fraser and Haddo House.