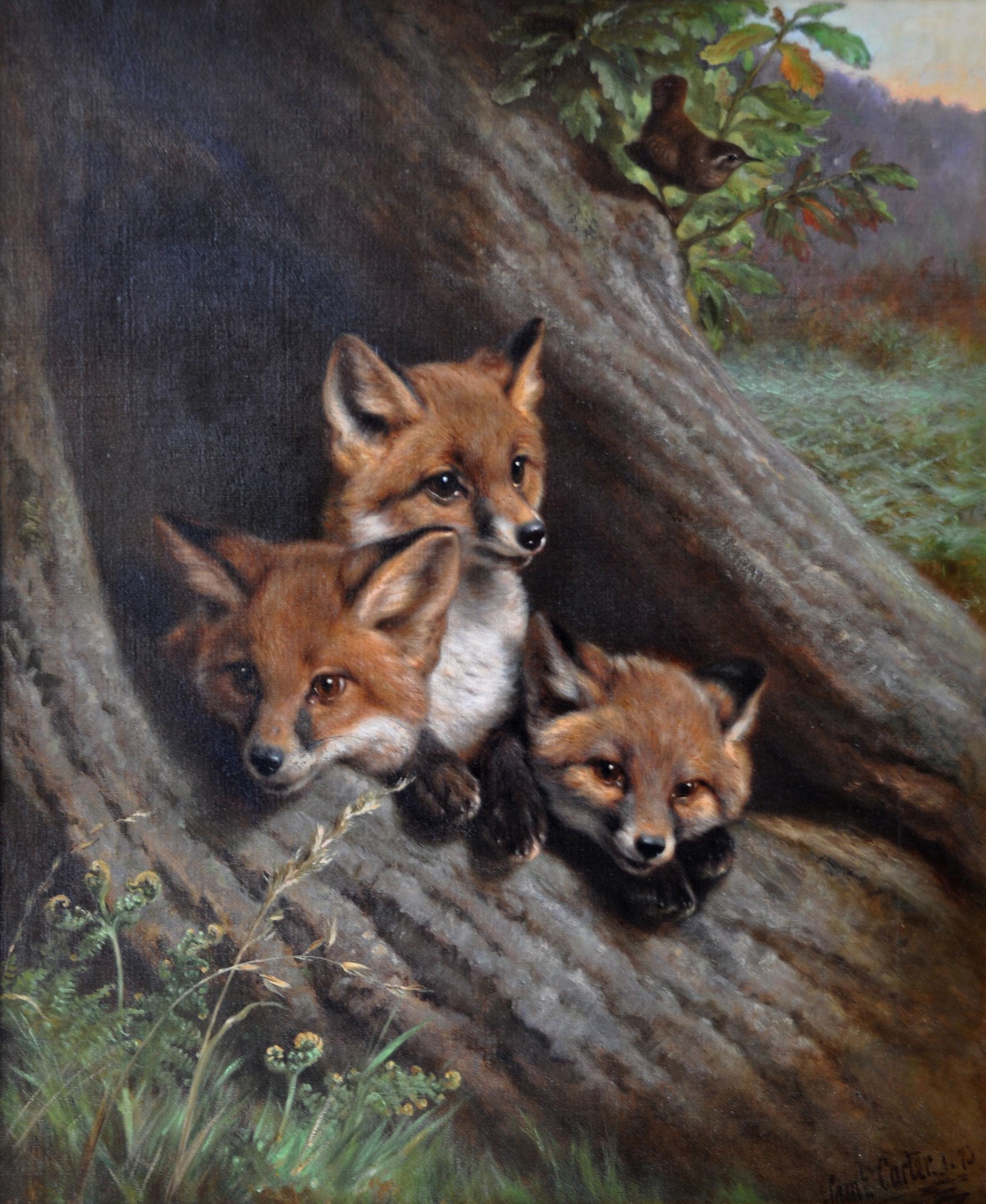 Oil on canvas, signed and dated ‘73

S J Carter's father was the gamekeeper and agent for the local squire Robert Hamond of the Manor House at Dunham near Swaffham, Norfolk and Samuel was born in the Keeper's Cottage in 1835. His talent for art was noticed by the eminent Norwich School painter John Sell Cotman who oversaw the Swaffham drawing school and at the age of ten, Samuel was awarded first prize. He is believed to have had further training in Norwich before then going on to the Royal Academy School in London.

He quickly established a name for himself in London, exhibiting his first picture at the Royal Academy, The Chase, as a twenty year old. He was living in Chelsea at this time and for the rest of his life sent paintings for the London exhibitions from addresses in King's Rd, Chelsea, Pimlico and Ecclestone Sq. and at 10 Rich Square in West Brompton where he remained until his death in 1892. However he evidently kept a close association with his home town of Swaffham as he owned a small cottage on the outskirts on the road leading to Sporle. Some of his eleven children were born there his sisters Catherine and Fanny looked after it while they lived in it. Carter and his family would visit for holiday which the artist would use as a base while he undertook commission work from the local gentry and landowners. He would depict their hunters and prized stock as well as pets and sometimes family groups. This address was used for exhibits between 1866 and 1868.

The house at 10 Rich Square, where he lived with his wife Martha Joyce who also came from Swaffham originally whom he had married in 1858, had a garden in which there was a menagerie of small animals which were kept in large pens. He would sit in the garden and study and sketch them to use in his paintings

His reputation was built mostly on his portrayal of animals which can display a Victorian sentimentality, something he shared with the renowned Sir Edwin Landseer and in fact, Carter is said to have worked in collaboration with Landseer on at least one occasion. Family tradition has it that their ancestor produced the original drawings for the lions that form the base of Nelson's column in Trafalgar Square. A particular feature of his paintings is the way he emphasised the softness and warmth that emanated from his subjects and W Shaw Sparrow, the eminent historian and critic of sporting paintings, said of his work that he "…marked a phase in the transition towards benevolence to animals". The landscapes in his paintings are well painted and noticeable in the way that lightness and depth are depicted which augments the pleasing nature of the composition and John Ruskin commented in a complimentary manner on two of his exhibits at the RA show in 1875: "Altogether enjoyable to me; and I am prepared to maintain (as a true lover of dogs young and old) ... that this picture is exemplary in its choice of a moment of supreme puppy felicity as properest time for puppy portraiture" (of The First Taste) and of The Little Wanderers he wrote: "…a most pathetic and touching group of children in the wood. You may see if you take an opera-glass to it, that the robin is even promising to cover them with leaves, if indeed things are to end, as seems too possible".

Predominantly an animal painter, executing a number of good horse and pony portraits, deer, dogs, puppies and rabbits, Carter was particularly adept at depicting beautiful velvety coats. He did pain a few landscapes and coastal scenes such as Timber Hauling; east Norfolk, near the coast; To the rescue, Norfolk coast, a lifeboat manned with a gallant crew; Autumn echoes, and Loch Nagar. There were also a few genre scenes, for example: The Scottish Chieftain's daughter; The Falconer's lunch and the Librarian.

Three of the Carter's children had died as children and the tenth-born, Howard born on 9th May 1874, was not of a strong constitution and was sent to Swaffham to stay with his aunts as a precaution. It was while he was there that he got to know the Amherst family at the nearby Didlington Hall. The family had an impressive collection of Egyptian antiquities and this fostered a life-long passion in the young Howard which reached its apogee with the discovery of Tutankhamun's tomb. Howard wrote of his father: "We all inherited from our father an inborn faculty for drawing: he being an animal painter of no little fame, and one of the most powerful draughtsmen I ever knew. His knowledge of comparative anatomy and memory for form was matchless. He could depict from memory, accurately, any animal in action, fore-shortened or otherwise, with the greatest ease." The father had encouraged Howard to study and draw animals and at the age of fifteen was able to sell some of his drawings and watercolours of what he described as "…parrots, cats and smelly lap dogs."

Another son, William, became an artist and had gained entry to the Royal Academy Schools as a sixteen year old partly enabled by the sponsorship of Sir John Everett Millais.

S J Carter exhibited forty-nine paintings at the Royal Academy, eighty-five at the Royal Society of British Artists and three at the British Institute. He also became the principal animal painter on The Illustrated London News from 1867 to 1889 and contributed to The Graphic. He was elected a full member of the Royal Institute of Oil Painters in 1893.

Examples of some of his exhibited paintings include: The Falconer's lunch at the Heronry, Didlington Park, Norfolk; A stampede from a wolf; A September evening, Exmoor Forest;a wild stag at bay; A favourite shooting pony, The property of F Millbank, Esq, MP; The ancient sport of kings; The first grouse of the season; At the stud: Marionette and Tamark the property of C Johnstone, Esq.

The work of Samuel John Carter can be seen in: Tate Britain (Morning with wild deer which was part of the original collection of Sir Henry Tate which he donated to the government in 1894 and was originally known as The National Gallery of British Art when the gallery opened in 1897); Southwark Art Collection; Rochdale Arts and Heritage Services, Lytham Art Collection and Swaffham Town Council. There is an albumen carte-de-visite by Charles B Praetorius of Carter done in the mid to late 1870s in the collection of the National Portrait Gallery.