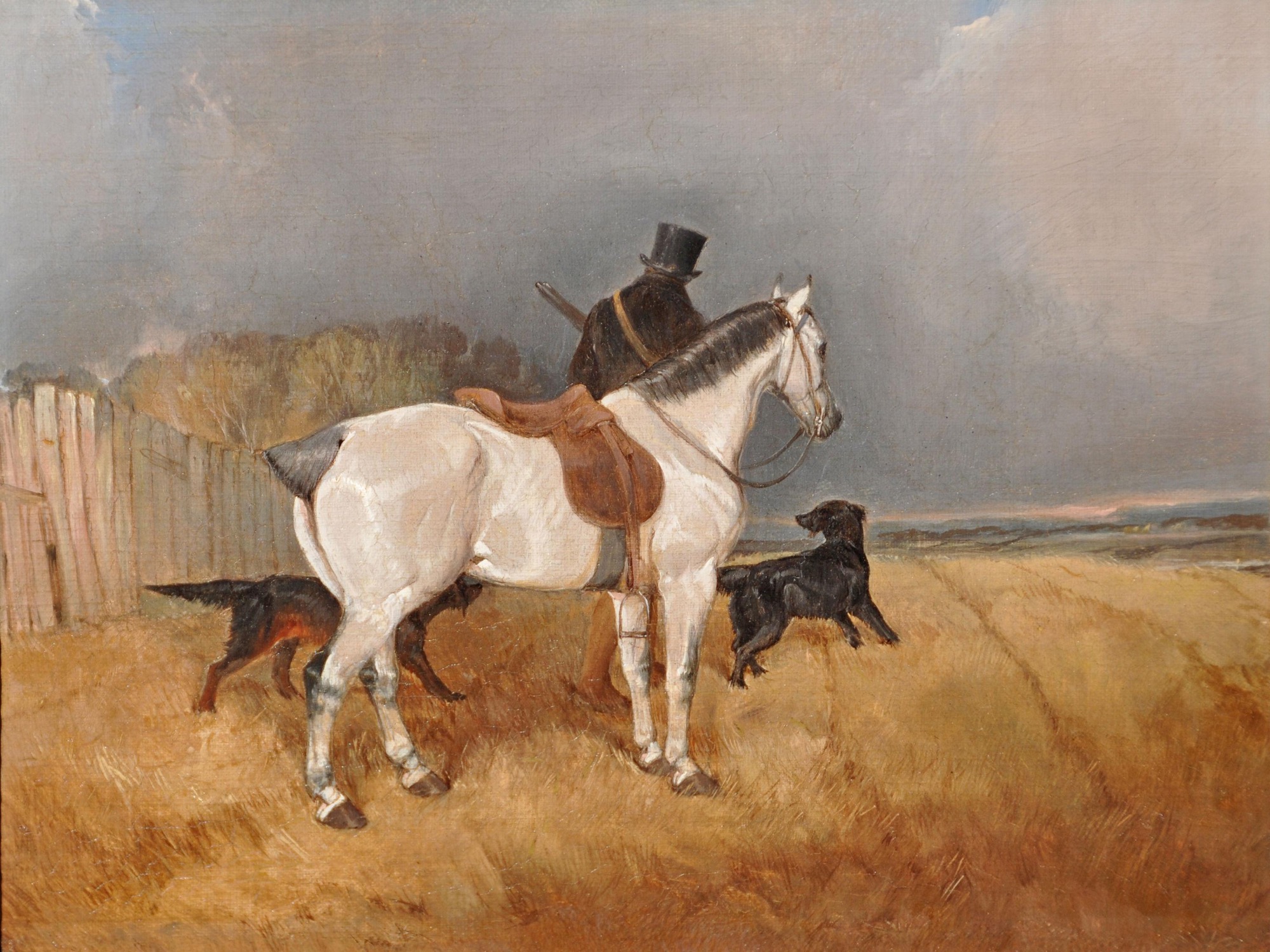 Oil on canvas laid on panel

"He must be admitted to the first rank of animal painters of his age" is how J C Wood summarises his entry for Abraham Cooper in his Dictionary of British Animal Painters and Sally Mitchell in her fine Dictionary of British Equestrian Artists writes that he was a: "…sporting artist of outstanding ability".

He was born on 8th September at Red Lion Street, Holborn, London, and was the son of a tobacconist who later became an inn keeper. At the age of 13 Cooper became an assistant at Astley's Circus, run by his uncle William Davis. This circus was a highly popular nineteenth century attraction which combined a stage and a circus ring enabling plays to be put on featuring horses and armoured knights. This probably formed the background to his later career as a painter in which horses played a large part.

Cooper had an aptitude for drawing, turning his attention at an early age to the study and painting of the equine form and becoming highly proficient. His uncle recognised this great ability and introduced him to the eminent horse painter Ben Marshall when Cooper was twenty-two and he became a pupil of the master for a while. Marshall was so impressed with his new pupil's ability and enthusiasm that he gave him free instruction. Even so, he can be considered largely self-taught. Within two years he was producing work for The Old Sporting Magazine and during his lifetime contributed 189 pictures to this publication as well as the New Sporting Magazine. This work rapidly secured his reputation as a painter of dogs and horses and he earned himself the sobriquet "Horse" Cooper.

Abraham Cooper worked mainly in oil and sometimes in watercolour and normally signed in monogram. The influence of Benjamin Marshall is particularly apparent in his racehorse portraits which are of very good quality and the subjects of the picture are always placed in well-painted landscape settings and these landscapes were soft and atmospheric which skilfully contrasted with the figurative and equine subjects of his work.

He became greatly in demand to portray the winners of the Classic races. One of his most esteemed works is the portrait of "Adonis", George III's favourite Arab charger and many consider it the equal to James Ward's dramatic portrayal of the same subject. In 1813 Cooper painted his first picture for the Duke of Portland who was to become one of his major patrons and over the course of his career, Cooper's paintings commanded the highest patronage, including the Prince Regent, Queen Adelaide and Queen Victoria, and high prices for his scenes of combat, mostly involving horses.

He first exhibited at the Royal Academy in 1812 and his first painting exhibited at the British Institute: "The Battle of Waterloo" in 1816, was purchased by the Duke of Marlborough. In 1817 he won a prize of £150 at the Royal Academy for a painting of a battle scene and this encouraged him to paint a battle scene virtually every year for the rest of his life. In the Dictionary of Victorian Painters, Christopher Wood writes: 'As a painter of battle-pieces he stands pre-eminent - holding an analogous position to Peter Hess in Germany and Horace Vernet in France'.

He was elected an Associate Member of the Royal Academy in 1817 for his "The Battle of Marston Moor" and became a full member in 1820. He had several pupils of which the most renowned were J F Herring Snr and William Barraud and his influence and style is apparent in some of their works, most particularly in Herring's.

Cooper married Mrs Francis D'Ebro and they had two sons, one of whom, Alexander also became a painter of landscapes, figures and historical subjects.

Cooper exhibited 74 times at the British Institute and 332 at the Royal Academy. including such titles as: "A Grey Horse at a Stable Door", "Launcelot, the winner of the great St Leger, 1840", "Returning from Deer Stalking", "An Arabian, the property of Sir Philip Lee", "Shooters on the Moors", "Mocking Bird, a celebrated Greyhound, the property of a gentleman", "My own Grey", "Wellington's First Great Victory - The Battler of Assye", "The Death of Harold at the Battle of Hastings" and "Grouse Shooting". Many of his works were engraved.

He died at Woodbine Cottage Greenwich on Christmas Eve 1868 and his obituary, published in 'The Sporting Life' states that he was: "…a guileless, pleasant gentleman and a thorough sportsman who rode well to hounds, was a good shot and a clever fly fisherman".

Oil on canvas laid on panel