Two Spaniels and a white Pheasant in a wooded Landscape 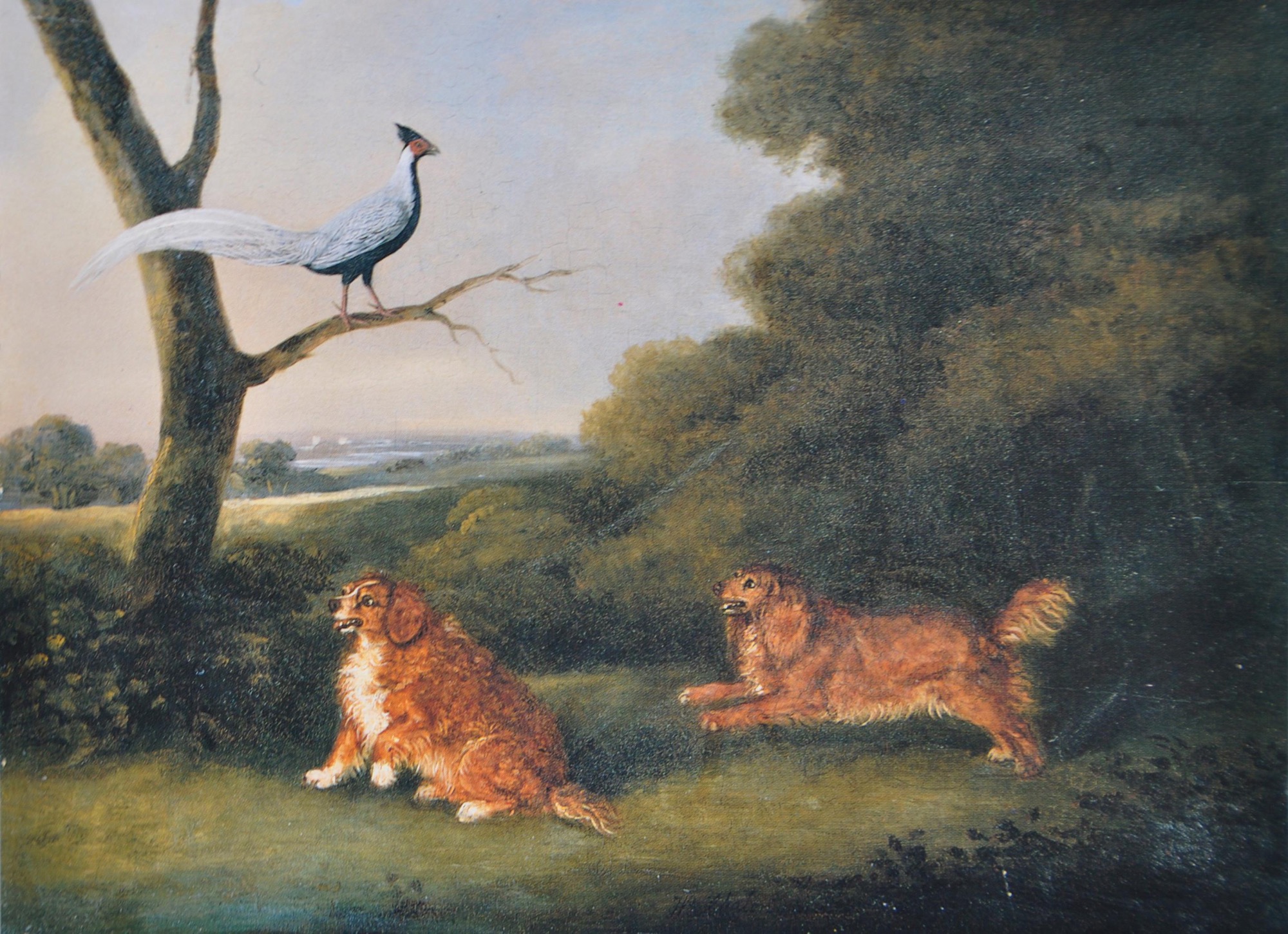 Two Spaniels and a white Pheasant in a wooded Landscape

Two spaniels and a white pheasant in a wooded landscape

Henry Bernard Chalon was an animal painter who achieved considerable success in his life and had highly influential and prestigious patrons, culminating in his appointment as animal painter to Federica, the Duchess of York in 1795 and later to the Prince Regent and William IV.

He was the son of Jan Chalon who was a Dutch engraver and musician who came to England from Amsterdam. In London Jan met and married Jackey Bernard whose father was the financier, merchant, MP and Lord Mayor Sir John Barnard. Sir John’s other two daughters married the Hon. Henry Temple, who was the father of the 2nd Viscount Palmerston, and Sir Thomas Hankey. Jackey was perceived by her father to have married well below her station so he effectively disinherited her and had no contact with her although in his will he did leave a small legacy to her children.

Chalon entered the Royal Academy Schools to study painting and printmaking in 1788, winning a silver medal there in 1790. He showed his first works at the RA – “Landscape with horses” and “Landscape with cattle” at the annual exhibition when he was twenty-one. In 1796 he married Sarah Ward who was the youngest sister of the eminent animal and landscape artist James Ward and the engraver William. The Ward family continued the artistic inter-marrying as another Ward sister, Anne, married George Morland and William married Morland’s sister, both couples doing so in a double ceremony at St Paul’s.

The marriage between Chalon and Sarah did not endure however but did produce a daughter Maria who eventually became a miniaturist. Chalon took a mistress – Sarah Wilson - and they had an illegitimate son together. This was inexcusable to the Ward family and James is believed to have done as much as he could to hamper Chalon’s career and William, who had been engraving some of the young artist’s early works, ceased doing so after 1810.

Despite the best efforts of James Ward, Chalon’s career went from strength to strength and he was able to attract some highly influential patrons. Besides the aforementioned appointment to the Duchess of York, he painted many horses and ponies belonging to members of the Royal Family during the reigns of George III, George IV, William IV and the early years of Queen Victoria. Other notable clients included the Duke of Devonshire, the Duke of Beaufort, Lord Raby, Earl Grosvenor, the Earl of Darlington, Lord Heathfield, Thomas Thornton (1757-1823) - who spent a lifetime in the zealous pursuit of sporting interests - as well as many other wealthy racehorse owners, huntsmen and senior officers in the army. He seemed to have been rather detached from his contemporaries in the artistic community, regarded by some of the older artists as having a superior attitude and although he entered 198 works at the Royal Academy, he did not receive a single vote when his name was put forward for membership at the Academy. It is interesting therefor that he prospered, particularly in the straitened times of the Napoleonic wars when others such as Philip Reinagle suffered from diminished commissions.

He painted in the Ben Marshall, Abraham Cooper tradition but arguably the greatest influence on his horse portraiture was George Stubbs. In 1804 he produced a work titled “Studies from Nature” which he published in collaboration with the watercolourist J C Nattes which he dedicated to the Duchess of York. This work clearly shows how much attention Chalon paid to the muscular systems of horses which was described as “…the horse’s skeleton on a new system and Explanation of the anatomical table of the horse’s muscles” and this awareness of horses’ anatomy is something he shared with Stubbs. He was also inspired by Stubbs’s compositional devices and use of colour. Sally Mitchell, writing in her Dictionary of British Equestrian Artists, says of him: “His composition is pleasing and his pictures, which are normally signed and dated, always have a commanding air about them. He is one of the more important painters of his time…”

Many of his works were on a large scale and the occasional seemingly sombre tones of the background are offset by the vibrancy and spirit of the principal subject matter. He favoured soft tones in the landscape which better draws attention to the detail in the portrayal of horses, dogs and riders. Apart from the RA exhibited paintings mentioned above, Chalon showed 28 at the British Institute and 21 at the Royal Society of British Artists between 1792 and 1846. His best picture is thought to be “H.R.H the Prince Regent’s Staghounds unkennelling on Ascot Heath; with Mr Sharp, H.R.H.’s  huntsman, on Flamingo, his favourite hunter, the whippers-in on their favourite hunters, and a groupe of picked hounds”  in which all the figures are individual portraits. Examples of other works include: “Portrait of Jim Crow, a favourite spaniel”, “Wandering Boy, a favourite hunter, the property of the Duke of Beaufort”, “Sikh Goats, from Panjab, with their Indian shepherd”, “Partridge shooting”, “Portrait of a Persian Mare, presented to His Majesty by the Ambassador from the Emperor of Persia”, “Portraits of Blenheim and Rake, two favourite spaniels, the property of a lady” and “Ostriches painted from nature; the property of H.R.H the Duchess of York.”

Chalon’s knowledge of printmaking, gleaned from his father, meant that he was well-versed in this field and prints of his paintings proved popular. He published Chalon’s Drawing Book of Animals and Birds of Every Description and contributed nineteen plates to The Sporting Magazine. In 1804 he drew lithographs for Philip Andre’s Specimens of Polyautography. He painted a series of pictures for Passions of the horse between 1837 and 1843 which were then engraved and published by Jackson and the resultant lithograph illustrations expressed the animals’ emotions. He also worked with mezzotinter Charles Turner apart from his initial collaboration with William Ward. Some examples of these are: “The Earl of Lichfield’s State Carriage”, “The Raby Pack owned by the Earl of Dartington, with Leonard the dog feeder, their huntsman Sayer and Jasper the terrier”, “Snowball, greyhound owned by Edward Topham and shown with William Poshby, the old groom who always trained him”

When Chalon was seventy-seven, he “he met with an accident in the street” which possibly was a stroke. It was severe enough for him to lose the use of his limbs which prevented him from painting and he soon fell on hard times. In 1846 his situation was alleviated somewhat by funds from a subscription raised on his behalf. He died almost three years after his accident on 15th August at 7 Queen Street, Brompton, Middlesex.

He lived at various addresses in London including Portland Place, Devonshire Place, Fitzroy Square, Golden Square and Goodge Street among others.