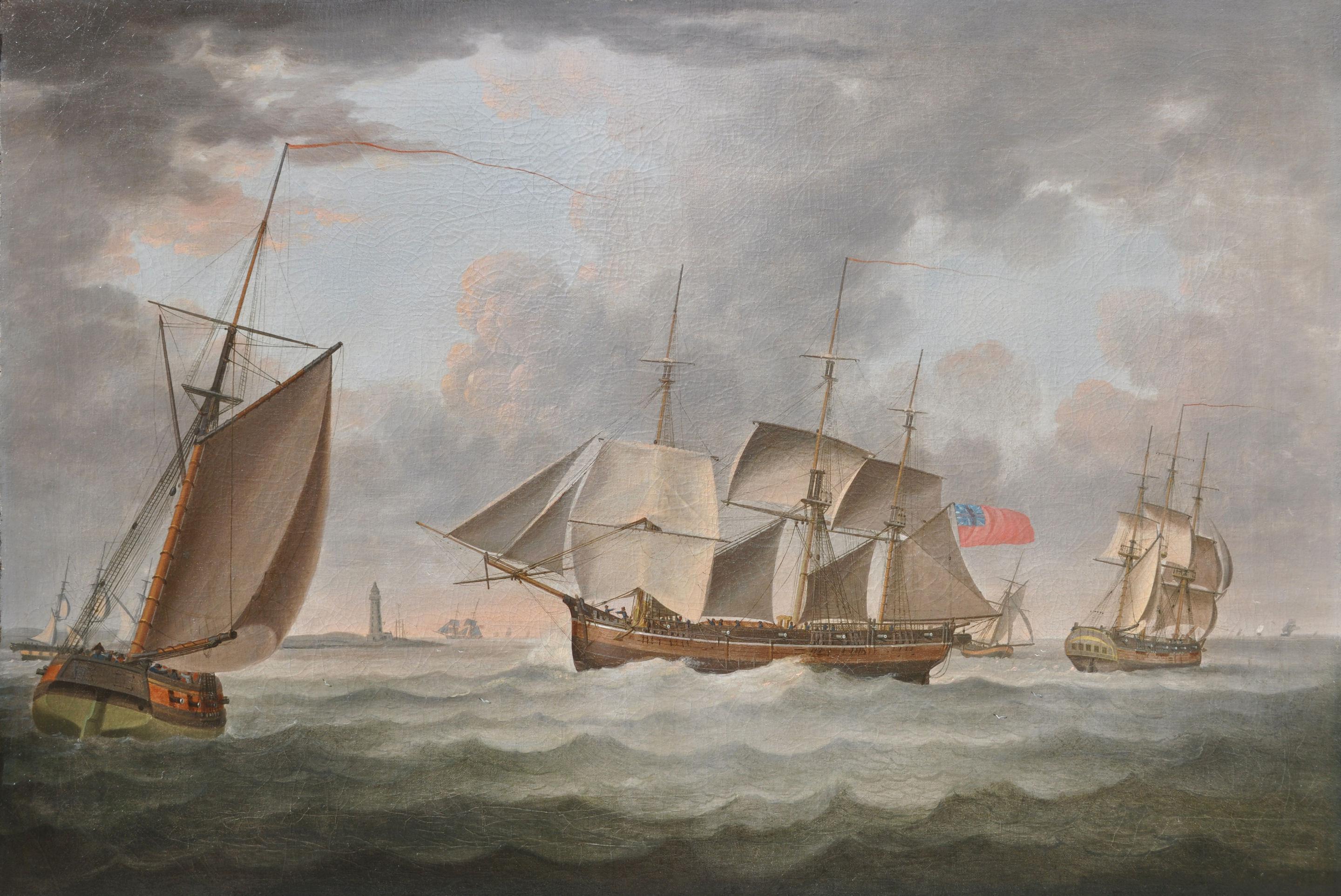 There is little known about the life of John Askew or his artistic training and in this he is like his contemporary Robert Willoughby, 1768-1843, the pioneer of the Hull school of ship painting and portraiture who started earning a living as a house painter but turned to easel painting later. It is assumed that Askew was from the North-East of England and he plied his trade as a ship portraitist, depicting the vessel for the owner or the captain. These ship portraits differ from marine paintings in that the vessel is the prime object in the painting with other craft and the landscape often subordinate to it. Often in the 18th and early 19th centuries, the ship would be shown in three positions with the focal point of the painting displaying the broadside and the other two showing the stern and the bow. The correct details of the ship were of paramount importance as the commissioner knew his ship very well so the artist had to be not only technically able but know how a ship sat in the water and how the wind filled the sails and for all this, the financial remuneration was fairly modest.

John Askew's work is not common but it would seem that he was influenced stylistically by Robert Dodd 1748-1815 and indeed, the former is known to have produced occasional copies of Dodd's work. There is a naval engagement depicting Warren's action on 23rd April 1794 near the Channel Islands, which Askew signed and dated 1805, which was taken from the original painting or else from the engraving and he was probably commissioned to produce this by some other naval office involved in the action.

The National Maritime Museum has "A whaler and other vessels in a light breeze" in its collection and the Quadrant in North Tyneside has "The Lifeboat Northumberland." A few other examples have appeared: "The brig Ceres in three positions off the entrance to Whitehaven", "HM frigate Arethusa inflicting the final blows on the French frigate Pomone off the Channel Islands " and "British ships off the coast."

Hull had a tradition of sea faring and marine-based commerce since the Middle Ages and this had concentrated mainly on the ports bordering the Baltic Sea and the Scandinavian Peninsula. Whaling had been part of this since the late 16th century but suffered a setback as a consequence of the upheaval of the Civil War, the expansion of Dutch activity in the hunting and the political manoeuvering of the London-based Muscovy Company which wanted a monopoly.

However in 1732 the government yielded to lobbying from the South Sea Company and agreed to subsidise the whaling industry so that even a failed trip would receive some recompense towards the costs incurred. At the same time restrictive trade tariffs were placed on foreign imported whale products. In 1754 an expedition to the Arctic financed by James Hamilton, set out from Hull and from then the trade grew, particularly when the waters around Greenland became a significant source of whales. In 1766 Samuel Standidge invested heavily in Hull which established it as a significant whaling port.

Many of the north-eastern whaling ships were "cat-barks" which were wooden commercial vessels of about 200 tons. Less than this and they would not be able to have the capacity to store supplies for the expedition and bring back the product and too much more would have entailed greatly increased costs in fitting out. The ships were strengthened with a double layer of timber externally as defence against the ice and large cross beams were installed internally to prevent crushing. The crew would have numbered between fifty and sixty men with a captain and two mates in reasonably comfortable quarters at the stern and the rest in cramped and unpleasant steerage.

The Greenland Sea yielded the Bowhead, also known as the Greenland Right whale (because of its characteristics it was the "right" whale to hunt). It weighed about 120 tonnes and grew to about 20 metres in length but was slow moving and not aggressive making it comparatively easy to catch. It had a high quantity of baleen sheets and blubber making it a profitable source of income.

The whalers operated in the Arctic summer and when a whale was spotted, the boats, each of which carried six or seven men, would be lowered from the distinctive davits at the stern of the ship and set off in pursuit commanded by the harpooner. The capture was often a long process involving an initial harpooning followed by tiring it out with the animal diving to great depths and the crew continually feeding the rope attached to the harpoon and to the their boat. When it tired and eventually surfaced, the harpooner had to get very close to deliver the killing thrust. The dead animal was then towed back to the ship where it was tethered alongside and then the work began to remove the blubber, baleen (used as springs in items such as corsetry or umbrellas), some bones and teeth (from sperm whales). The oil would be extracted from the blubber by boiling it, often in a deck furnace if there was not a shore base available, and then it would be stored in barrels in the hold.

By the beginning of the 19th century, the whaling ships of Hull accounted for about forty per cent of the British whaling fleet and the trade employed 2000 men. The threat from the Netherlands had all but disappeared as a consequence of the Anglo-Dutch war and also the naval blockade set up during the war with France. The peak of the whaling trade for Hull was in 1820 when sixty-two ships returned from a trip with the produce of 688 whales which was worth about a quarter of a million pounds at that time. This trade and product supported a lot of ancillary business and manufacturing in Hull which was dependent upon it. The following year however marked the start of the decline when nine ships were crushed in the ice and investment was withdrawn from future expeditions resulting in the fleet being reduced by about thirty per cent. In 1822, a further six vessels were lost and eight others made not a single catch. Government financial incentives were then withdrawn and with the development of new alternative products and technology, whale products were less competitive and so by 1868, only two steam-powered whalers left Hull and with the wrecking of the last of these in 1869, the industry moved to Scotland marking the end of almost 300 years of a Hull marine tradition.