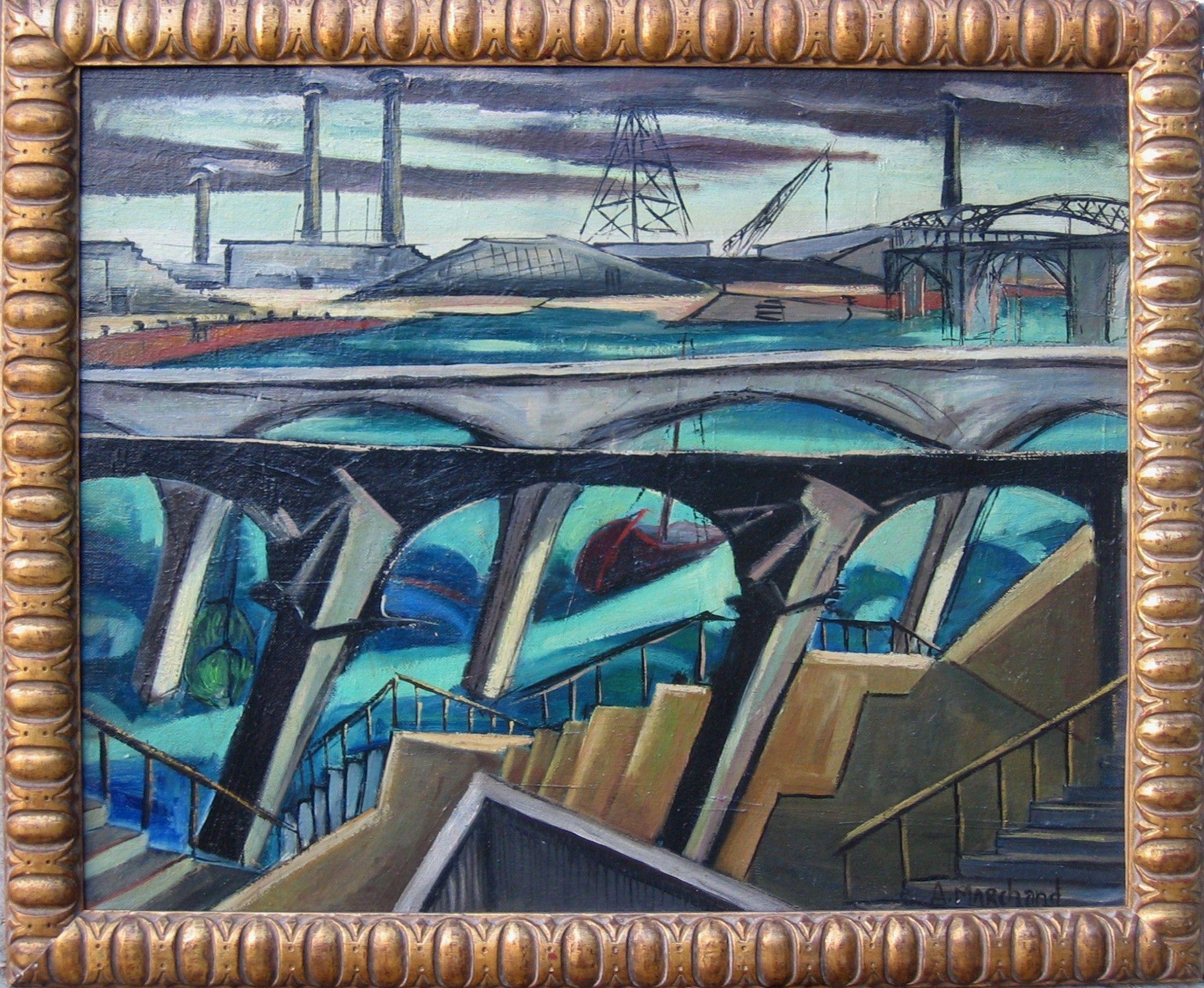 A native of Aix-en-Provence in the Bouches-du-Rhone region where he had been born on 10th February 1907, Marchand studied at the Jesuit school there.

As soon as he had finished his education, he trekked across the Provençal scrubland known as Les Garrigues and Les Alpiles, a hilly region in the Luberon area, in an attempt to get close to the soul of Paul Cezanne. He broke away from his family and went to Paris for he felt totally driven in his ambition and needed to exorcise his demons. He spent long years suffering in a painful withdrawn state working as a struggling young artist in the vibrant capital city. Luckily he made friends among the artists he encountered and in all his free time away from soul- destroying jobs done to subsist, he utilised painting with fellow aspirant artists such as Francis Gruber.

He exhibited some of his paintings for the first time in 1932 at Le Salon d'Automne in Paris followed by Le Salon des Indépendants in 1933 up until 1939. He was part of the artistic group known as Forces Nouvelles yet it was in Le Salon de Mai, a circle of artists who were mainly his friends, that he showed his great and most impassioned canvases.

His work attracted attention from 1934 onwards and he was taken up by collectors and dealers. Further success was achieved when he was awarded the Paul Guillaume prize in 1937 for his painting "La Jeune Fille et La Paralytique". The result of this was that he was instilled with confidence and it opened the floodgate of his expression. He now felt on a mission and divided his time between Aix, Baux, Sainte Marie and Burgundy, immersing himself in humid forests and only occasionally returning to Paris.

He also travelled abroad and one painting expedition was to Biskra in southern Algeria and in 1935 he went alone to Vienna and from there to Moscow. However the outbreak of World War 11 in 1939 interrupted his aspirations and, joining the army, he suffered terribly from the shock of the defeat and the horror of war itself and he was demobilised in June 1940. He went to Aix and the Camargue for a year and a half to recuperate before returning to Paris. During that period he had painted a series of still-lifes and these works prepared him for the great paintings set in Arles and Baigneuse and 1948 marked a transition in his life and approach to art. He attempted to deconstruct the secret of nature itself by utilising a kind of artistic system of symbols and hieroglyphs in landscapes and beach scenes of deep greens and blues.

But he was still too disturbed and restless to settle and he spent a further long period on the Atlantic coast, absorbing the rhythm of the sea and the scudding clouds. Finally, towards the end of the 1960s, a prolonged trip to Mexico re-ignited his creative talent and he started to work with a new focus and direction in colours strong with sulphurous green and yellow.

André Marchand was a painter who defined his period like his close companions Gruber, Tal-Coat and Giacometti. His canvases show the dominant figures of fishermen, taut and enigmatic, framed against strange scaffolding or a wall with the sea surging behind. He also designed costumes and sets for the ballet, in particular Suite Provençale and Mireille in L'Opéra Comique in Paris. Furthermore, he produced a number of cartoons of Aubusson tapestries and illustrated several works of literature for writers such as André Gide, Julien Green and Raymond Queneau.

Retrospective exhibitions of his paintings were held in Tokyo, Osaka, London, Venice, San Paolo and Mexico. During his life, the evolution of his art was marked. He worshipped Picasso, he was never cautious in his approach and his impulsiveness and emotion shines through in his landscapes, portraits, nudes, figure paintings and still-lifes.