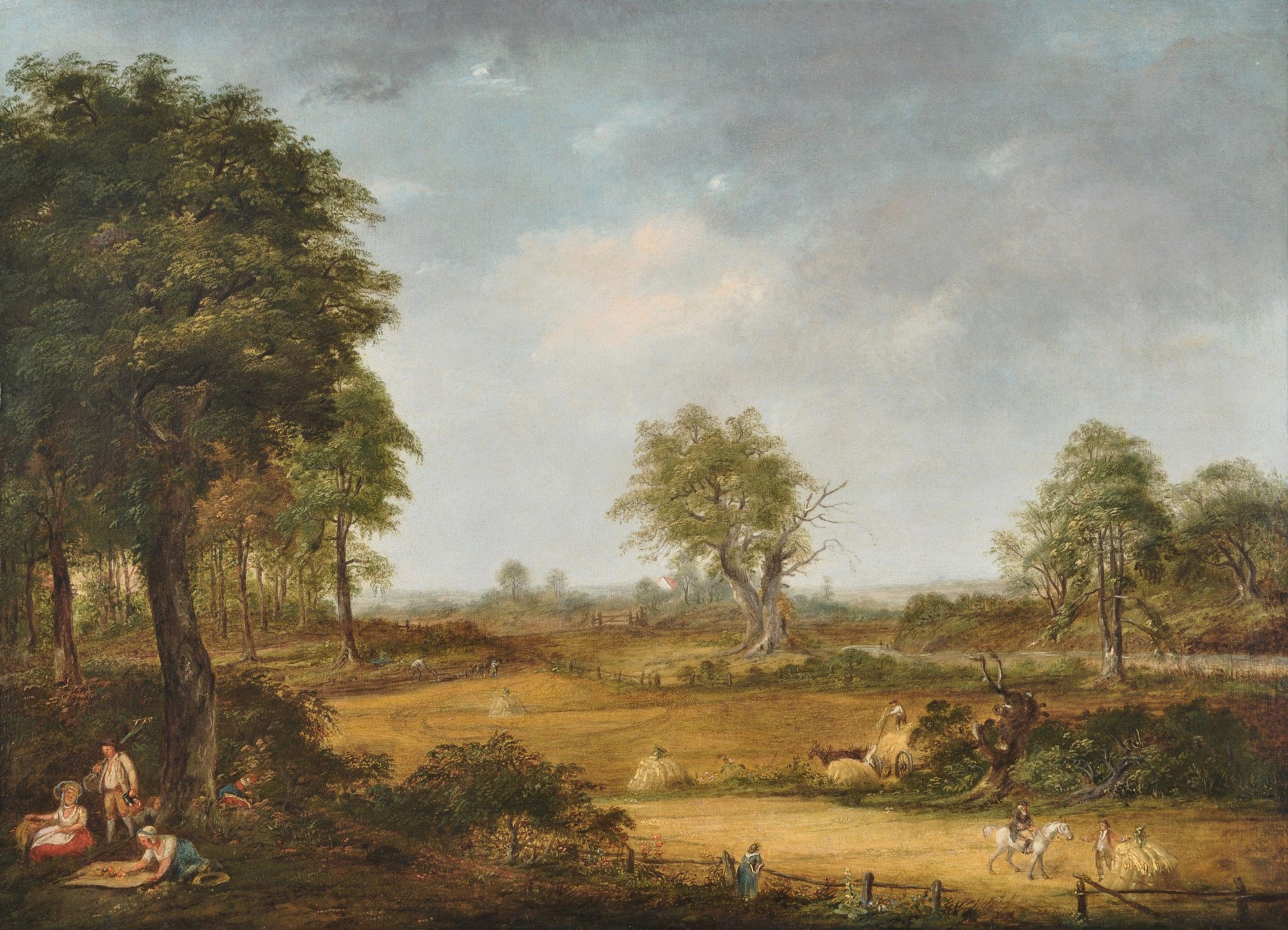 Charles Catton Jnr was born in London on 30th December 1750, the son of Charles Catton Snr, the animal, landscape, classical and history painter. His father was one of thirty-five children born in Norwich and had originally been a noted painter of heraldry on coaches and hatchments but had graduated to a higher form of art, eventually becoming a full Royal Academician and one of the foundation members of the RA. He had been apprentice coach-painter to George III and in 1754 was appointed Master of the Company of Painter Stainers but, in his recreation time, produced landscapes and portraits. His profession earned him a good living and apparently he left his son financially secure.

Catton Jnr lived at his fathers house in Gate Street, Lincoln Inn Fields in London, where his father resided from 1769 to 1793. He was initially instructed by his father and worked as a professional coach painter but entered the Royal Academy Schools in 1775 to further his studies. He exhibited his first painting, "A View of London from Blackfriars Bridge, at the RA the following year and was soon established as an artist in both oils and watercolours as well as engraving and working as an illustrator and a theatrical scene-painter.

He travelled extensively through England producing topographical views and he gained a reputation for these works. Many of these incorporated animals and these were finely observed and painted. Catton engraved a significant proportion of these scenes and they were used for various publications, both books and periodicals, such as the Copper Plate Magazine, Middiman's Views, and "The Seasons" by Thompson. In 1788 he drew, engraved and published "Animals drawn from Nature and engraved in Aquatinta" and in 1793, Henry Jukes, the London printer, published "A Series of four Views in English and Scottish Border Country" a set of hand-coloured aquatints which both Catton Snr and Jnr worked on together following Jukes's commission.

His "Animals drawn from Nature" publication, (later published in New Haven in America in 1825 by a local publisher and book seller called H Howe), was a particularly lovely series of designs portraying wild and domestic animals such as lions, monkeys, dogs and bears. These are historically interesting in the print worlds as they are the first example of aquatints being used for natural history illustrations.

In 1793, working in conjunction with the artist E A Burney, he exhibited a series of designs illustrating John Gay's "Fables" which were subsequently published. He also worked with several explorers and naturalists documenting the results of their travels to the new lands. Like other natural history and botanical artists, Catton had not himself visited these far away places to draw the subjects from life in their indigenous habitat. Instead he would have worked from preserved dead specimens and the occasional creature which had survived the journey back in captivity. John White's "Journal of a Voyage to New South Wales", documenting his travels to the South Seas in 1787, includes a picture of a kangaroo by Catton.

Catton lived at various addresses in London after leaving his father's home but moved to Purley near Reading in 1800, remaining there until he emigrated to America with his family in 1804. He, his wife, son and two daughters, settled on a farm near the Hudson River in upper New York State and stayed there until his death on 24th April 1819. Painting for him had become solely a recreation as he had no need to continue producing work for financial reward as it was said of him that he had "acquired wealth" through his painting. One of his works done during this period, "Noah and his Ark", was much admired by those who saw it in the home of Colonel George Bomford in Washington and was copied by the American artist Charles Willson Peale for his Philadelphia Museum. Peale believed that Catton's original encapsulated in one painting all his own theories about the harmony of art, nature and religion and said of the process, upon receiving the painting on loan on 1st May 1819, "I cannot do justice to the merit of the picture…although I have never loved the copying of pictures, yet I would wish to make a copy of it…"

Charles Catton exhibited thirty-seven paintings at the Royal Academy which included titles such as: "A View of Sheffield Place in Sussex", "Carting Ice", "View of Freshwater, at the back of the Isle of Wight", "Portrait of a young Gentleman and Dog", "The Sergeant in his Glory", "The Wheelwrights", "An Ass and Foal" and "Mackrell-boat coming up the Thames".

The Victoria and Albert Museum has five drawings by him in its collection.