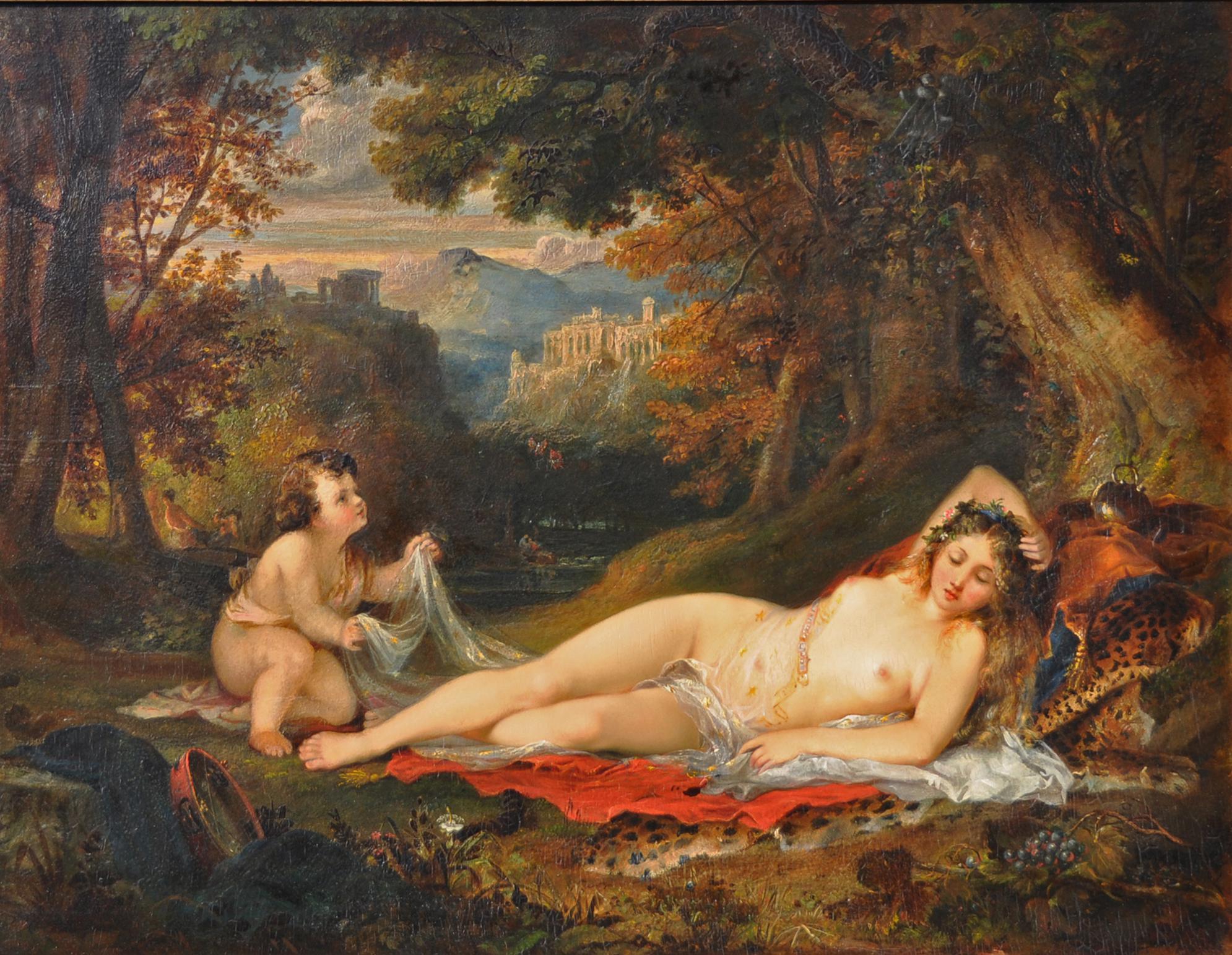 
George Arnald was predominantly a landscape painter in the old English manner whose numerous exhibited works (176 at the Royal Academy, 63 at the British Institute and 5 at the Society of Artists) included many fine paintings.

He was born in Farndip in Northamptonshire (although some sources claim that he hailed from Berkshire and indeed Farndip, which is now called Farndish, is in the county of Bedfordshire) in 1763. There is very little known of his early life but it is thought that he worked as a domestic servant prior to becoming apprenticed to the studio of the landscape painter William Pether (c.1738-1821).

Arnald specialised in landscapes both in oils and watercolours which sometimes, upon first sight, seem imbued with almost sombre tones, but which upon closer inspection reveal that they are infused with fine subdued colour. He was at his best in his smaller works which were often done as illustrations to topographical publications and magazines and some of these works were produced on paper. Grant says of him "Many of these glow with bright but always tempered tint laid on with a richness unseen in the larger canvases".

He exhibited at the Royal Academy for the first time in 1788 with a work bearing the title "Scene from Nature". Examples of other works shown at the RA and BI include: "Diana and Actaeon", "Pyramus and Thisbe", "Three Spaniels belonging to Mr Nowel", "Effect on the sea shore at Aldborough", "View of London from Greenwich Park", "Bay of Naples", "A view of Paris from Montmartre", "The Army under Cromwell marching to Winchester" and "Group of flowers from the garden of the painter."

His illustration work included among others: "The New British Traveller" by Thomas Dugdale, "The Border Antiquities of England and Scotland by Sir Walter Scott and "The History and Topography of the County of Essex" by Thomas Wright. Arnald also published his own album of views of the River Meuse and its environs in 1828 and in 1839 published "A practical treatise on landscape painting in oil: illustrated by various diagrams and with two original studies in oil painted on the principles given in the treatise"

He never gained full membership of the Royal Academy partly due to a mutual antipathy with some of the Academicians, notably the important and influential Sir Thomas Lawrence. There might have been an element of intellectual snobbery at play also as evinced by a conversation between one of the founders of the National Gallery and the British Institution and talented amateur landscape artist, Sir George Beaumont and the poet William Wordsworth where the latter said of Arnald: "... would have been a better Painter, if his Genius had led him to read more in the early part of his life. . . . I do not think it possible to excel in landscape painting without a strong tincture of the Poetic Spirit". However he was elected to be an Associate Member of the RA on 5th November 1810.
Arnald travelled a lot in England to find his subject matter and with one of his closest friends, the eminent watercolourist John Varley, he travelled in Wales to paint through the years 1798 and 1799. He spent his entire working life living in London and sent his exhibited works from addresses in Spital Square, Hatton Garden, Hoxton and Fitzroy Street before settling in Pentonville where he died on 24th November 1841.

Although best known for landscape painting, he also produced some genre scenes, albeit usually in a landscape setting and in later life he developed an interest in marines. His most famous work from his entire oeuvre is a marine and is "The Destruction of L'Orient at the Battle of the Nile" which is now in the National Maritime Museum. It was exhibited at the BI in 1827 and presented to the Greenwich Hospital.

The National Gallery has the large "On the Ouse" and his fine self-portrait, where he is portrayed seated before his easel on which sits one of his most renowned paintings "The Castle of Gloom," is in the National Portrait Gallery. He is also represented in the collections of the Victoria & Albert Museum, Tate Britain, Somerset Museum in Taunton, Shipley Art Gallery, Ferens Art Gallery, Guildhall in Winchester, University of Cambridge, Government Art Collection, the National Trust (Calke Abbey and Petworth), the Fine Art Museum of San Francisco and the Indianapolis Museum of Art.

His greatest patron, Mr G Crockford, became an exhibited painter himself working closely in Arnald's style and one of his most successful students was the portrait and genre painter Henry William Pickersgill. His son Sebastian Arnald produced a bust of him.