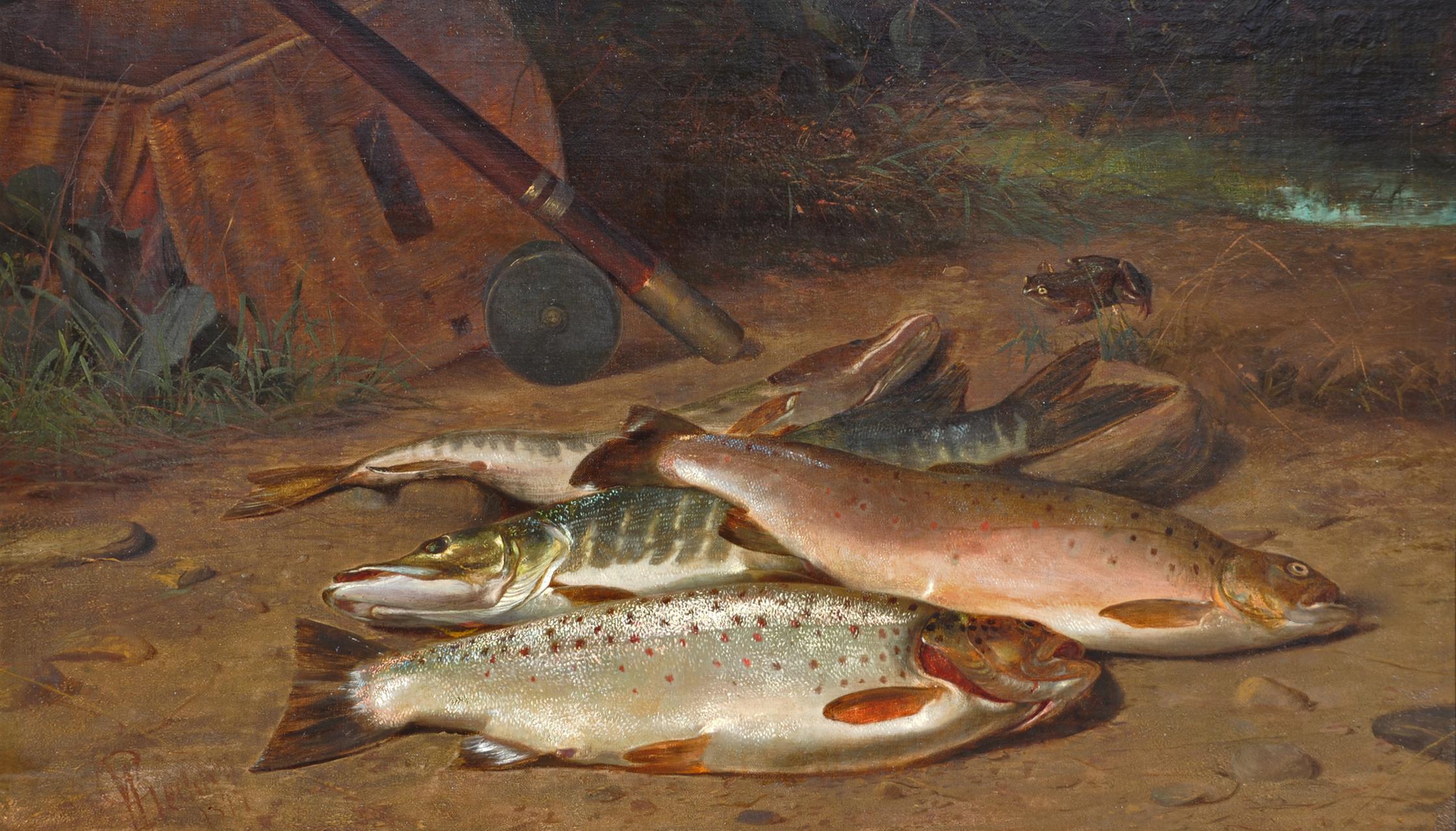 Oil on canvas, laid on to panel, signed and dated 1877

The Scottish painter William Geddes was born in the east Perthshire town of Blairgowrie in 1841, the son of the stone mason William and Agnes (née Ross) Geddes. He attended the local school and then trained as a house painter and decorator, serving his apprenticeship in 1853 with G M Dickson on a salary of two shillings a week.

When his apprenticeship was completed, he moved to Edinburgh which was close to his brother who was a merchant in Leith and although William is regarded as a self-taught artist, it is possible that he had some artistic instruction while in the capital. It was in Edinburgh that he met Margaret Ewan and in 1864 they were married and he returned to Blairgowrie with his new wife and lived in Rory Street in the family home before setting up their first home together at Riverside House in Rattray. In 1874 they moved to Gowanbrae Cottage and William spent the rest of his life there. He converted some of the outhouses at Gowanbrae Cottage into a studio and also maintained a large fish tank in the garden, the better to study them closely, which enabled his acute and meticulous painted observations of fish. He kept a pet monkey as well.

Geddes became the central figure of a group of artists based in and around the town who became known as the "Blairgowrie Boys" and although this band was small and confined to the local environs, its reputation spread and, as a consequence, other artists were drawn to the town.

He had clearly determined to follow a career in painting for he exhibited his first picture at the Royal Scottish Academy in 1865 and continued to show his paintings there, with the exception of 1881, until his death in 1884. During that period he exhibited forty-four works at the RSA with titles that included: Trout from the Lorne, Cock and hen salmon on a bank with a rod and reel nearby, Boys guddin for trout, Basket of trout, The haunt of the wild duck, The sportsman's daughter preparing dinner, Home with his "take", The village auction, Where stream and river meet, Winter landscape with skaters and The children's war. He was a member of the Scottish Arts Club and also showed seven paintings at the Royal Glasgow Institute of the Fine Arts between 1861 and 1884.

These examples show that his subject matter included not only piscatorial studies but also landscape and portraiture and genre and it was the latter which formed the substantial part of his earlier work. He painted portraits of his wife and children but also commissions such as Thomas Lamb, his wife and family on the lawn at Brewhead House, Birkhill. He used his friends and family as models for these figure subjects and there was no shortage of sitters for his paintings of children because he had eleven of his own. Two of these, Ewan (1866-1936) and Robert Smith Geddes (1883-1951), became artists. Ewan painted rural scenes and landscapes chiefly in watercolour and was elected a member of the Royal Watercolour Society and had use of his father's studio after the latter's death. Robert abandoned his career and emigrated to Canada even though Ewan apparently regarded him as the more talented of the two.

William had a reputation of being rather bohemian, a bon viveur and a most witty and convivial host at the artistic and musical gatherings at Gowanbrae. His diary reveals his fondness for his love of fishing, drinking with his friends, playing billiards and not being so keen on attending church. This circle of friends included not only the Blairgowrie artist circle but also gallery owners and locals like the Grimond family of Oakbank. Some of his artist friends were eminent such as David Farquarson, Hugh Allan, Thomas Burnett, William Dikson and George Whitton Johnstone. The sculptor Thomas Stuart Burnett, who created the statue of Alexander Selkirk in Largo, was another close friend and produced a bust in plaster of Geddes which is now in the Perth Museum and Art Gallery. It displays the painter's thick, rather unruly hair and big bushy moustache.

In 1871, Geddes travelled to Paris to study at the Louvre for two months but was arrested as a spy for sketching in the streets before convincing the authorities of his bona fide intentions. One of his most important commissions was from the American steel magnate Andrew Carnegie who had been born in Dunfermline and in later life visited his birthplace. Carnegie wished to commemorate this significant event and Geddes produced the painting and included several members of his family in the throng of people. It can be seen in the Carnegie Birthplace Museum in Dunfermline.

Perth Museum and Art Gallery has nine paintings by Geddes in its collection and included some
of his paintings, drawings and sketch books in their exhibition The Blairgowrie Boys which ran
From 16th December 2016 to 5th May 2007.
Bibliography:
Dictionary of Scottish Art and Architecture - Peter J M McEwan
Blairgowrie Boys, exhibition catalogue (16 December 2006 - 5 May 2007) - Perth Museum and Art Gallery
Dictionary of Scottish Painters 1600-1960 - Julian Halsly and Paul Harris
The Dictionary of Victorian Painters - Christopher Wood