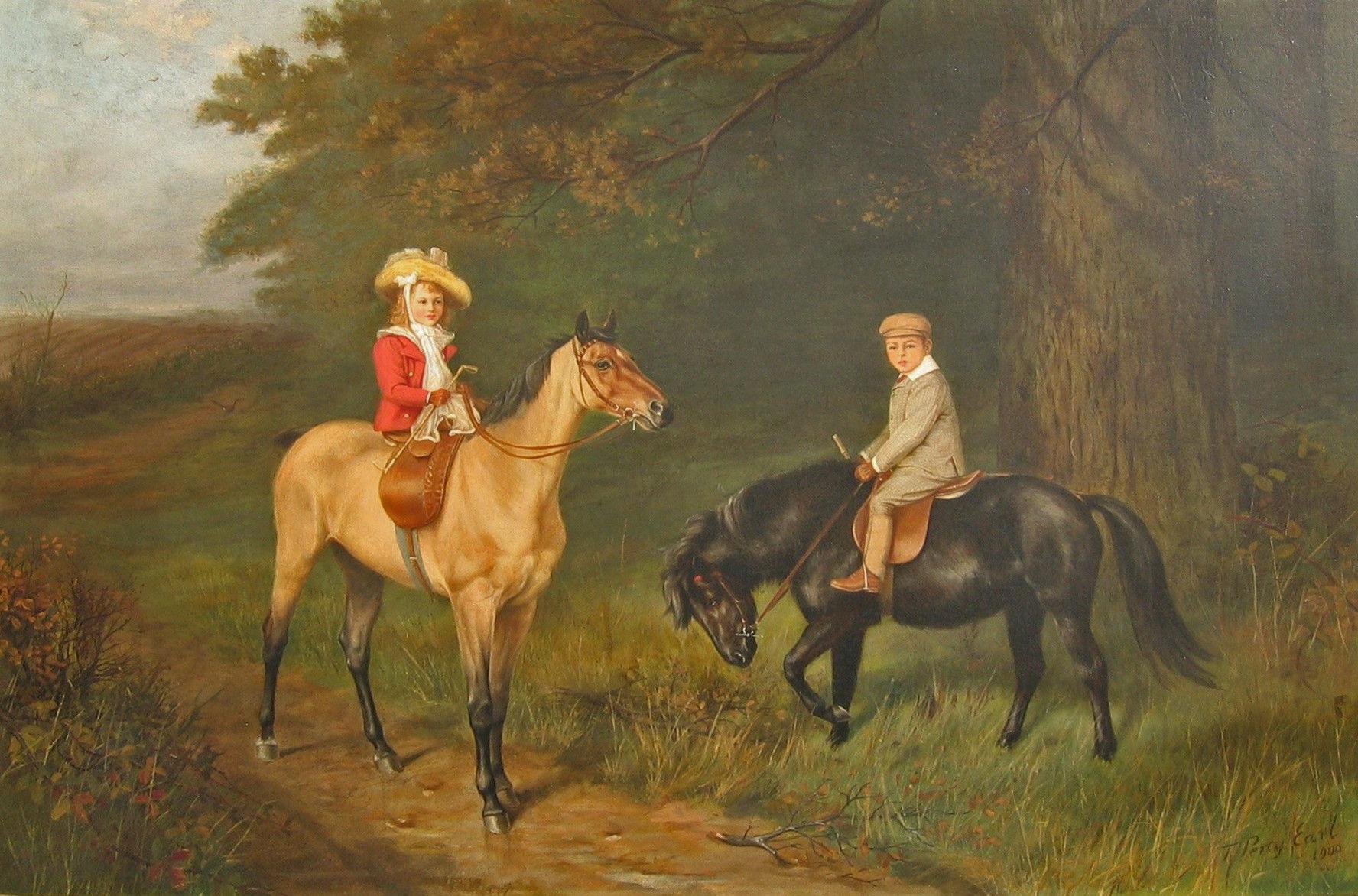 Although Thomas Percy Earl is the son of the accomplished Victorian animal and sporting painter George Earl, nephew of Thomas and brother of the major dog painter Maud, comparatively little is known of his life and career. This is principally because he did not exhibit at the public venues but relied almost exclusively on commissioned work.

Most of Earl’s works are portraits of single horses, both of privately owned hunters and of racehorses, but he also executed paintings showing several horses, often with hounds. A fine quality portrait of the Doncaster Cup winner ‘Colorado Kid’ is recorded as are ‘Sceptre’ the Oaks winner in 1901 and ‘William III’, the Ascot Gold Cup winner in 1902. Sir Victor Sassoon had his first victories in English Classic races with ‘Exhibitionist’ and Sir Victor commissioned Earl to paint the filly’s portrait.

Other fine examples include ‘Precipitation’ owned by Lady Zia Wernher and the bay colt ‘Seminole’ raced by Mr T Widener. The public at large could see Earl’s work in Vanity Fair to which he contributed equestrian cartoons.

Sally Mitchell says of him: “His work is free and strong and he is amongst the better portraitists of his time.”

Gogo and Bobbie Sievier were the children of Robert Standish Sievier, 1860-1939, renowned in the racing world as Bob Sievier who led a colourful life both on and off the track.

According to his autobiography, he was born in a hansom cab, the son of the inventor and eminent London based sculptor Robert William Sievier. His travels took him to Australia and the Kaffir Wars in the Sudan among other places. Apart from being a journalist, he appeared on the stage but achieved most renown as a racehorse owner and trainer winning an exceptional four out of the five Classics in 1902 with the legendary mare Sceptre. Many regarded him as a bit of a rascal and his life is also recorded in John Welcome’s book “Neck or Nothing: the Extraordinary Life and Times of Bob Sievier”.

His son Bobbie pursued a career in the world of music and theatre where he was known as Bruce Sievier. He was principally a lyricist but was also a music and scriptwriter. He adapted the play “Strange Adventures of Miss Brown” by Harriet Jay which she had written under the nom-de-plume Charles Marlowe, turning it into the musical “Tulip Fever”.

He was involved in many other plays and musicals but achieved most fame and success through his songwriting and had a lot of hits between 1935 and 1953. This, coupled with his well-groomed imposing stature and silver grey hair earned him the sobriquet ‘the Gentleman of Tin Pan Alley’. Some of his best known songs include: “Au Revoir”, “Every Day with You”, “Speak to Me of Love”, “J’attendrai”, “Piccadilly”, “Song of Paradise” and “Love’s Last Word”.

Despite this though, he died penniless aged only fifty-eight in Hampstead Garden Suburb in 1953.