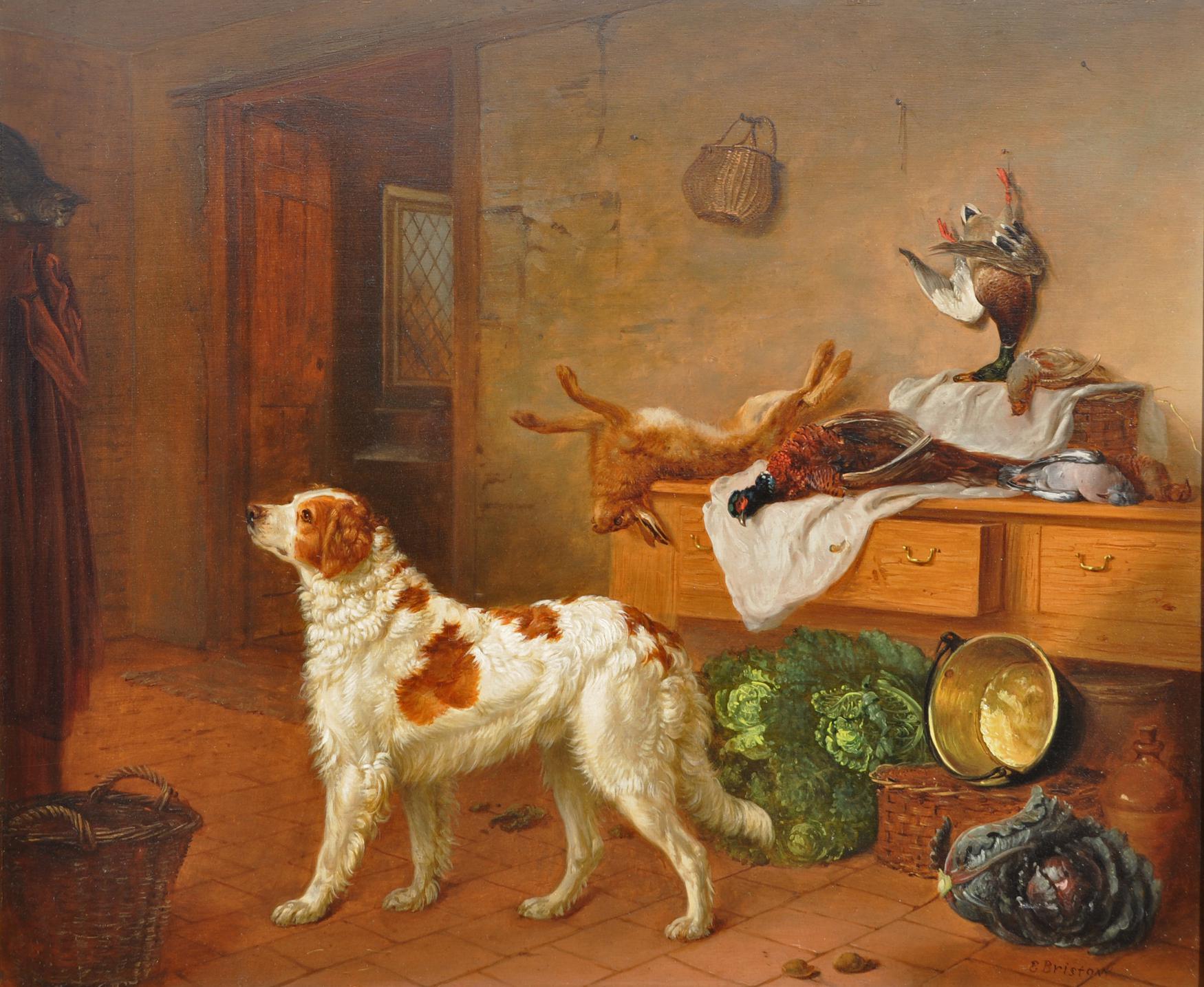 Ex collection: Bought by R Desham 18** according to inscription on reverse of panel


Edmund Bristow was born in Windsor on 1st April 1787 and spent his whole life there. He had a reputation as rather reclusive and consequently not much is known of the background details of his life. When he died in 1876, the Art Journal could find almost nothing to write about in its obituary of him such was the privacy of his life.

His father was a heraldic painter and probably gave his son his early instruction in painting. Bristow often favoured painting small works painted on wooden panel with scenes around his native Windsor and Eton portraying meadows, pools and heath land with finely observed animals and he found a good market for these among the local populace and from the school. He has been described as the "Little Master of English landscape painting" and Grant writes of his technique: "…with beautiful brushwork and immaculate liquid impasto he reproduced atmospheric effects of actual grandeur, often with the lurid lilac tone of an impending thunderstorm or the haze of a midsummer afternoon." In his small works, the careful and meticulous detail emulated the manner and technique of the cabinet paintings from the 17th century Dutch Golden age. Another critic wrote: "Usually known for his exquisitely detailed oils in small scale, he also painted larger canvases with delightful sensitivity and skill."

The subject matter portrayed in Bristow's work was wide and included domestic interiors, street scenes with shops particularly in Windsor and its environs, landscapes, some portraits and equestrian portraits and open air genre scenes with boys at play, and still life as well as a large selection of sporting scenes - particularly favouring shooting and coursing subjects - and animals. Some of his pictures were humorous compositions such as "Before the Monkey Duel," "A Monkey holding up a Notary" and "Dispensing of medical electricity (electrotherapy)." He was a friend of the outstanding Victorian animal painter Sir Edwin Landseer and it is believed that Bristow gave advice and assistance to the younger artist.

He exhibited twelve works at the Royal Academy, eleven at the British Institution and eight at the Royal Society of British Artists. Some examples of these works are: "Sporting dogs," "Terriers and rabbit," "A smith shoeing a horse," "Portrait of Jefferies, many years an earth-stopper to the Berkeley hounds," "Portrait of Mr Norman as Don Quixote in the pantomime performing at Covent Garden Theatre," "View of Windsor Castle," "The donkey race," and "A brace of partridges."

Sally Mitchell, in her Dictionary of British Equestrian Artists, writes: "His horse portraiture gives the impression of a deep feeling for horses, being painted with great sensitivity, and his landscapes are well composed, making the most simple portrait into a delightful picture."