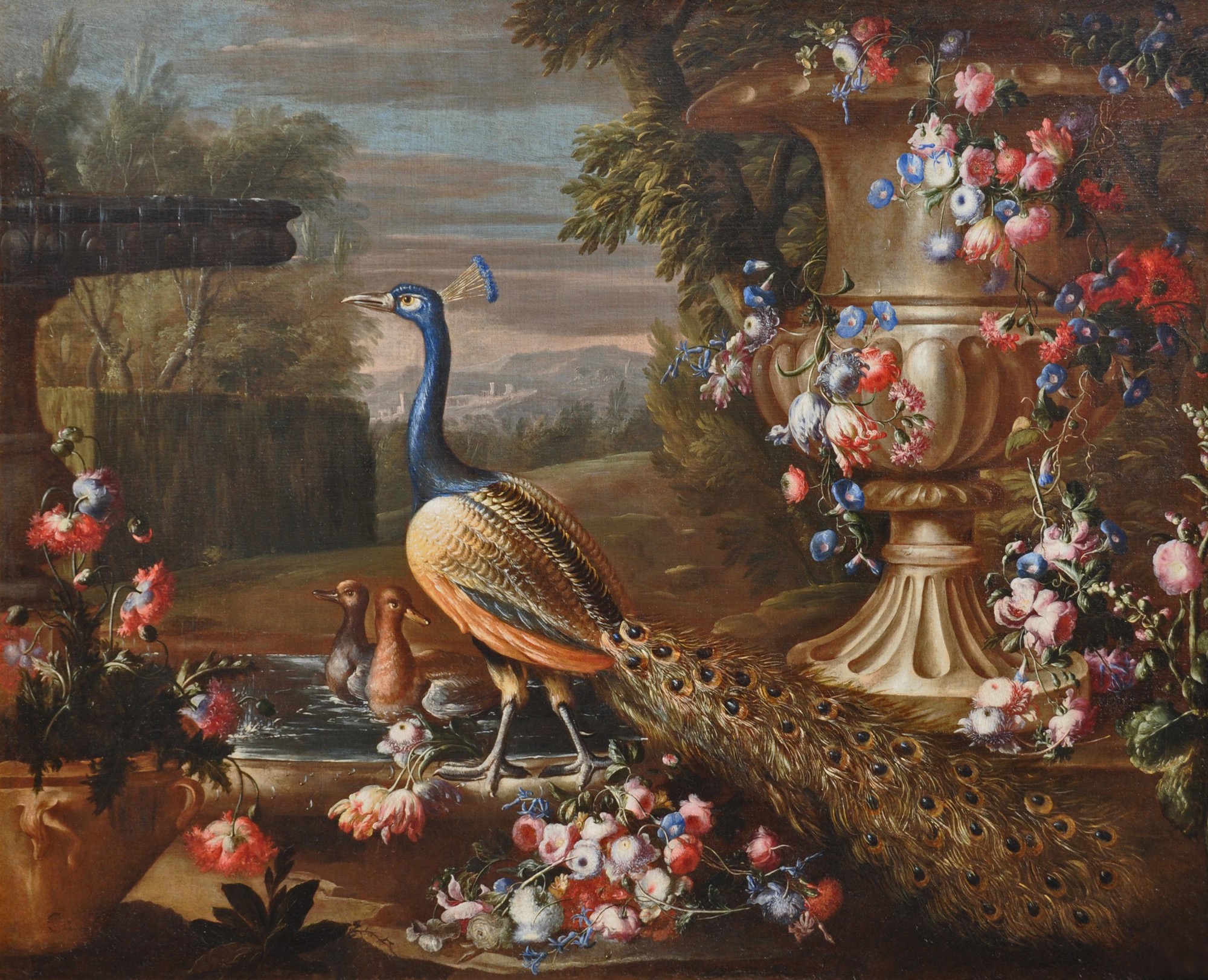 Nicola Casissa was a Neapolitan still-life painter, noted for his vibrant portrayals of flowers, often in great abundance, fruit and birds done in an elegant and decorative manner. He followed in the city's great artistic tradition of producing flamboyant and technically excellent still-lifes which had largely been initiated by Caravaggio who, having stated that it required as much effort to paint a good flower piece as a figure subject, helped to revolutionise and eventually abolish the closed attitude to genres of painting. Caravaggio maintained that art was the mirror of nature and his superb Basket of Fruit, now in the Ambrosiana in Milan and painted in 1597, marked the birth of European still-life painting. Throughout the 17th century, Neapolitan still-life painting was founded on the principles demonstrated by Caravaggio and these artists seem to have been the only ones to correctly understand and utilise his ideas.

Luca Forte (c.1615- c.1670) was one of the first Neapolitan artists to adopt the Caravaggesque naturalism in this genre of painting and with exceptional creativity sweeping through the city in the 1630s, he was soon followed by Paolo Porpora and Guiseppe and Giovanni Battista Recco and the Ruoppolo family. When Abraham Brueghel arrived in Naples in about 1670, his influence accelerated the transition of the portrayal of still-life to a more baroque style often epitomised by an abundance of flowers, cascading over classical objects like water.

This more baroque style was taken up by a new generation of painters and one of the first and most prominent of these was Andrea Belvedere (1652-c.1732). He taught Nicola Casissa and other artists working in a similar vein included Gasparo Lopez (called Gasparo di Fiori) d. circa 1732 and Nicola Malinconico (1663-1721). Casissa was certainly working in the latter part of the 17th century, evidenced by payment receipts from 1683 and 1691, and his clever combination of different elements makes reference to the Neapolitan Rococo of the mid-17th century but with more consideration given to the individual effects of colour and light. His earlier paintings were still close in style to the 1680s style of Aniell Ascione and Guiseppe Ruoppolo with carefully worked fruit, but over time this evolved into something much more personal with a variety of flowers, depicted in meticulous detail, partnered with verdant leaves. He incorporated ducks, parrots, birds of prey, peacocks, other birds, toads and on rare occasions, children among grasses and thistles and gathered around fountains, marble balustrades or other architectural or sculptural elements, often with an open landscape in the distance.

These paintings which combined the traditional naturalism favoured by the city with the new 18th century decorative style proved highly popular with the more secular Neapolitan middle classes as well as the aristocracy and royalty to furnish their grand homes. They loved the harmonious colouring and composition suffused with exuberance.

Nicola Casissa is known to have had at least one pupil: Giorgio Garri who continued in his master's manner in many ways but with a less vibrant palette and softer technique and utilising more figures such as amoretti and others from classical mythology.

A pair of paintings with several similarities and of almost exactly the same size as this one was sold at Sotheby's in 1955, the property of Sir Hughe Knatchbull-Hugessen. Examples of his work can be seen in the Museo di Palazzo d'Arco in Mantua, Museo Correale in Sorrento, Museo Nazionale di Trapani, the de Ciccio collection in Naples and the Museo Nazionale degli Strumenti Musicali in Rome which has a spinet built by Onofrio Guarracio, one of the most important harpsichord makers of the 17th century, for which Casissa decorated the outer case with floral designs. A number of Casissa's paintings were in the collection of Duke Nicola Coppola of Canzano according to an inventory compiled in 1714 and other work were in the collections of the Imperial Marquis of Francavilla, the Duchess DAragona Pignatelli, Michael Geronimo Vulturale, the Duke Gaetani dAragona, Duke Andrea Bonito and Marquis Alarcon de Mendoza among others.