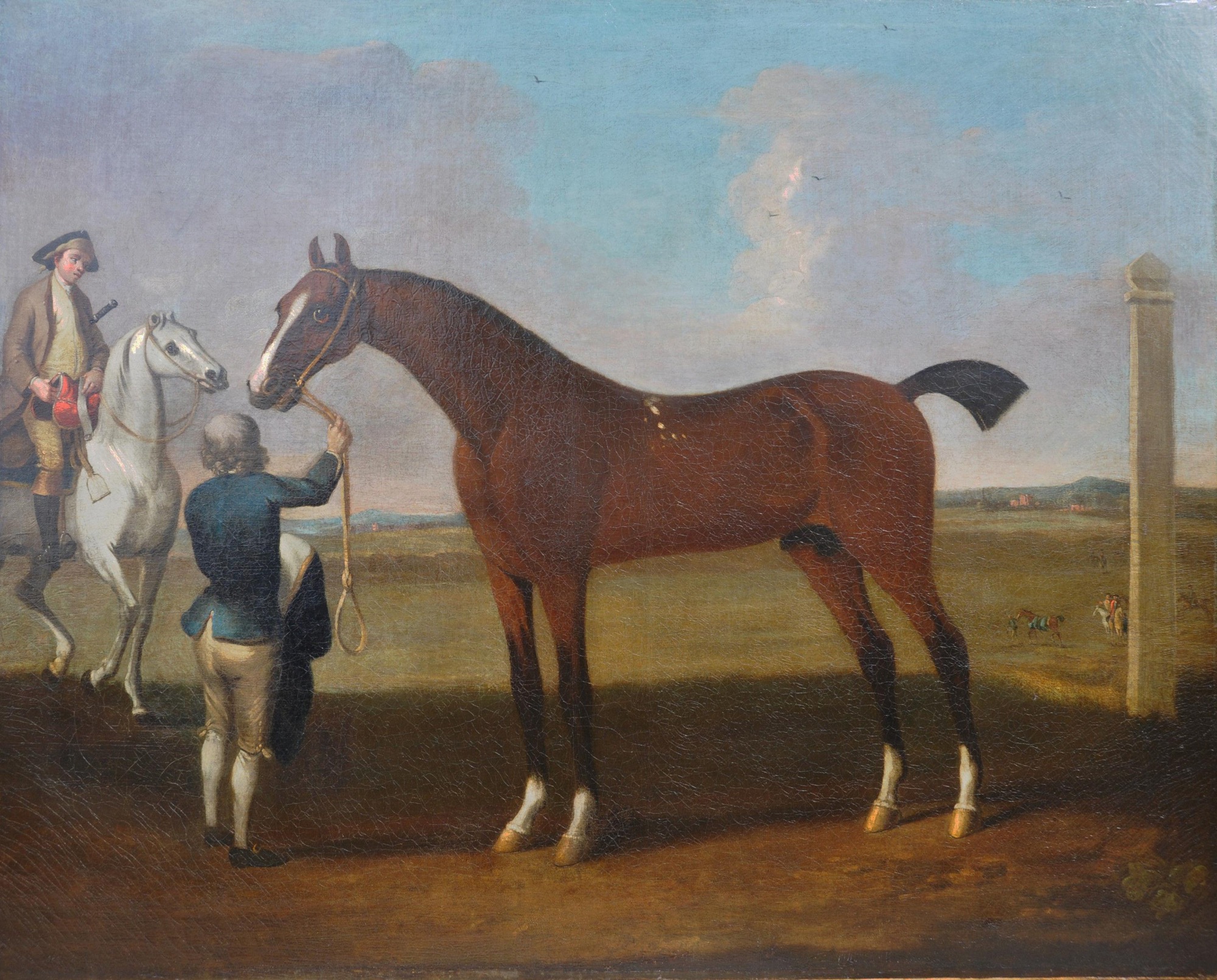 Thomas Spencer was a renowned 18th century equestrian artist but comparatively little is known of his life. It is very possible that he was a pupil of James Seymour and they were certainly working together between 1740 and 1746 when they produced thirty-three racehorse portraits for the publisher J Cherry which were engraved by H Roberts.

It is also probable that he was a professional painter prior to his time with Seymour as he had a reputation for producing portrait miniatures, some of which were on enamel. Horse portraiture, with the increased interest in racing at that time, proved more profitable and set the course for his career as is demonstrated by the fact that Spencer was able to charge 15 guineas for a portrait on horseback in 1760.

His style is very similar to that of James Seymour. Both have a charming, slightly primitive style and this influence can be seen in other horse painters of the time such as Francis Stringer, William Shaw, Richard Roper, Daniel Quigley, Thomas Burford, Thomas Butler and John Walsham. Seymour's paintings were strongly coloured and quite finished whereas Spencer's is somewhat softer and more naturalistic which probably resulted in a better likeness. Some critics regard Spencer to be the superior of the two because of this ability but Seymour has always been better known. As they both signed frequently with initials, there is a suspicion that a number of works that had been deemed to be Seymour were in fact by Spencer as often they are virtually indistinguishable.

The racecourse at Newmarket can be considered the centre from which the tradition of British sporting painting originated. The three artists who are considered the founders of the school were firstly Pieter Tillemans, John Wootton and then James Seymour and they all worked there and all produced large panoramic views of the Heath with a string of horses. They originated the idea of combining a sporting subject with the earlier tradition of a topographical or panoramic landscape. Thomas Spencer was one of the very few painters of that time who were able to capture the prized high-spirited imported Arab blood that was making such a mark in the racing world. In addition, he took care with his settings and there are trees in the landscape rather than just a rolling plain and the clouds are artistically portrayed.

Spencer and Seymour seem to have revived their collaboration of the early 1740s when they illustrated the folio "Horses and Pedigrees" which was published in 1752 and the former's paintings that were reproduced included race horse portraits of "Sporley", "Silver Leg", "Starling" and " Othello". Another set of twelve mezzotints engraved by Richard Houston at the behest of Spencer and published and sold by Spencer and Robert Clee from Panton Street, Leicetser Fields in March 1755 and March and April 1756. There were six after Spencer's paintings - including his portraits of the Cullen Arabian, the Chestnut Arabian, "Crab" and "White Nose" - and six after the recently deceased James Seymour. Spencer also collaborated with Thomas Butler as the latter published a number of engraved works of Spencer's paintings between 1751 and 1755. It is interesting to note that mezzotints gave softer lines and shading than other forms of engraving resulting in a better portrayal of the horse's physique which was a great boon to silversmiths as they worked on the reliefs on racing trophies.

Thomas Spencer's paintings have been in the collections at Hutchinson House, Lord Rivers, Marquess of Bute and the Mellon Collection.

Flying Childers was one of the most renowned horses of his generation and, indeed, can be considered as one of the greatest racehorses in the history of the thoroughbred.

He came from an impeccable pedigree: Flying Childers was bred by Colonel Leonard Childers of Cantley Hall, Doncaster in Yorkshire and was sired by the Darley Arabian out of Betty Leedes. The three stallions which were the founders of the modern day thoroughbred horse racing bloodstock were the Byerley Turk, Godolphin and the Darley Arabian and were known as the Three Pillars of the Stud Book.

He was foaled in 1714, grew to a height of 15.2 hands and had a distinctive blaze and four white stockings. The Duke of Devonshire acquired him (which is why he was sometimes known also as Devonshire Childers) and raced him for the first time when he was six years old. . In 1721 he ran in three races, and won them all, including a race at Newmarket in which he defeated the Duke of Boltons Speedwell in a match over the four miles on the Round Course at Newmarket in six minutes and forty seconds, carrying 9st and 2lbs. The following year Flying Childers won a race at Newmarket, defeating Chaunter, and in 1723 he made his final two starts.

"The fastest horse that was ever bred in the world" was a contemporary title bestowed on this remarkable horse and such was his notoriety and subsequent envy with which he was regarded by others in the racing world that the Duke was made many financial offers for Flying Childers including one of the same weight in gold crowns as that of his horse. The Duke was impervious to all of these offers however and retired Flying Childers to stud at Chatsworth.

A signed Spencer painting of Flying Childers in this format was probably commissioned by Sir Edward OBrien, 2nd Bt.; M.P. for Co. Clare, d. 1765, who bequeathed it to his son and it was later in the collection at Haughton Hall, Shropshire. Spencer did other portraits of this horse as did John Wootton and James Seymour, but the composition was different