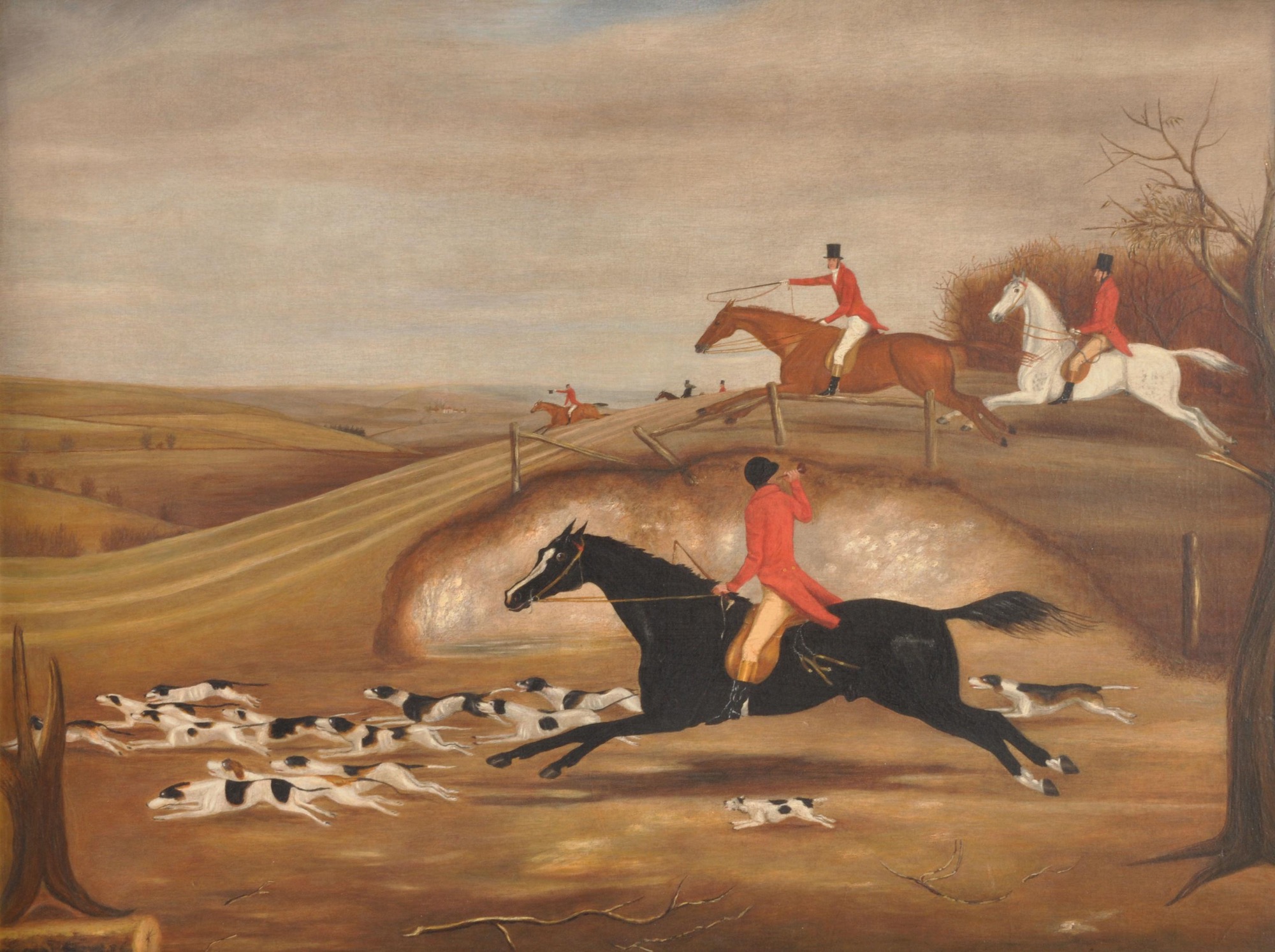 The renowned "Squire of Enderby" of Leicestershire was probably best known as a celebrated horseman and the Deputy Master of the Quorn under Hugo Meynell and his many runs and daring riding exploits garnered admiration beyond his home county.

Charles Lorraine Smith could trace his lineage back to the Norman Conquest and his middle name, eponymous with the area from which his ancestors originated before embarking with William, Duke of Normandy in 1066, remained with the family from the time that his forbear was made Governor of Northumberland after the Conquest.

He was born 1st April 1851, the second son of Sir Charles Loraine who was the 3rd Baronet of Kirk Harle in Nortumberland. He was schooled at Eton from 1762 before going up to Christ's College Cambridge from 1767 to 1772. In 1762 his great uncle Richard Smith Esq bequeathed him the manor of Enderby together with other estates and through an act of Parliament shortly after, Charles Loraine assumed the name Smith enabling him to stand as an MP.

He married Elizabeth Anne Shaw of Britwell House, Bucks, on 1st May 1781and their first child, Charles Crayle, was born in 1782 but lived only until the age of six. A further son, Loraine Smith, was born in 1784 and in later life he became a famous sporting parson. However, prior to his marriage to Elizabeth, Smith had become involved in a relationship with Frances Manners, the Countess of Tyrconnel, and they eloped together and this was cited by the wronged Earl in his divorce from his estranged wife in 1777. However the Countess seems to have had further ambitions as she then ran off with Philip Anstruther, the second son of Lord Newark and they married on 27th October 1777.

Smith had visited Florence, possibly with the Countess, and was included in Johann Zoffany's painting "Tribuna of the Uffizi" which was a painting commissioned by Queen Charlotte to show her what the gallery looked like. Numerous artworks, officials, diplomats, Grand Tour aristocrats, connoisseurs and collectors are portrayed. Smith is seated on a chair among a group looking at Raphael's Niccolini-Cowper Madonna and behind him stands Richard Edgcumbe, later the 2nd Earl of Mount Edgcumbe. It took the artist from 1772 to late 1779 to complete the painting which is now in the Royal Collection. It combined the English conversation piece with the 17th century Dutch gallery wunderkammer paintings and was much admired although Horace Walpole said of it: "…a flock of travelling boys, and one does not know nor care whom."

In1783 Smith served as the High Sheriff of Leicestershire and in 1784 was returned to Parliament as the MP for the Borough of Leicester in the general election but served only one term, retiring at the time of its dissolution in 1790. During this term, he made a number of speeches on subjects including Canada, India and support for the repeal of the Receipts Tax - the subject of his maiden speech on 18th June 1784 - and was a supporter of Pitt the Younger's ambitions for parliamentary reform and was also an opponent of the slave trade.

Smith's enthusiastic pursuit of country pursuits was only part of his life though as apart from his political work he was a gifted amateur artist, poet, violinist and keen patron of sporting artists. He was a friend of the celebrated rural artist George Morland and Morland, as a consequence of extravagant living and a fondness for gin, was always being pursued by creditors in London and Smith let him stay in his house in Enderby in 1790-1 in an attempt to steer him from his dissipation. They went hunting together and Morland's artistic influence can be seen in Smith's art, particularly in the set of eight engraved prints of "The Pytchely Hunt" and most noticeably in the portrayal of the legendary huntsman Dick Knight. His keen patronage of sporting artists and affable nature meant that several artists stayed at the house over the years, another example being Henry Alken whose influence is probably the most discernible, particularly in the hunting scenes and he was godfather to John E Ferneley's son Claude Loraine who was named after him. It is said that these professional artists would sometimes make little alterations to their host's work when he was not present.

He worked in watercolours as well as oils, producing mainly hunt scenes but also landscapes, a few genre subjects and portraits. Some paintings are deliberately humorous and reminiscent of the caricaturist Henry William Bunbury and he utilised his keen knowledge of hunting to parody some events. One of these shows how with the surge in popularity of hunting, especially among the new moneyed classes, there were some who were riding to hounds with little skill and no knowledge of etiquette and common sense. In the "Smoking Hunt: The Rendezvous at Braunstone on Friday the 8th of February, 1822, " some huntsmen can be seen smoking while hunting even though the smoke could impair the hounds' sense of smell and in the "Loss of the Chaplain" Smith pokes fun at some of the clergy with the subject of the painting pitched into a brook.

These last two were both included in a set of six hand coloured aquatints published by J Watson in 1826 the others being "The Rendezvous of the Quorn Hounds at Grooby Pool, on Tuesday the 16th of April 1822; A Leicestershire Burst; Bagging the Fox; and The Victory of obtaining the Brush, after what is called a Tickler. In all, at least five sets of prints were published of his work.

He exhibited six works at the Royal Academy and some titles of his paintings include: "Bagging a fox;" "A fox chase in Leicestershire," "Watering horses," "The Billesdon Coplow Run," "Breaking cover," "A distinguished character in the Pytcheley Hunt," "A Sunday concert," "Portrait of Edward Fleming Akers" and "A view in Charnley Forest."

The Leicester Museum has a work by him in its collection and other examples are in the National Portrait Gallery and the Royal Collection.

He died on 23rd August 1835, sitting in his armchair, and for such a character it is fitting to reproduce part of the Gentleman's Magazine obituary that summed up his life as: "In all the various relations of life, Mr Smith was a rare specimen of an English gentleman. His favourite theme was to bless God for having vouchsafed to him health and competence during a life protracted beyond the usual term allocated to man, and his death was attended with little or no pain, he died in his arm-chair and without a struggle, retaining his faculties to the last. In less than an hour before his departure, he had transacted business of some consequence with a friend, giving him directions with extraordinary accuracy.

He was a sincere friend, a kind and hospitable neighbour, affable and bountiful to the poor, a cheerful companion and full of anecdote, an indulgent and generous master, an active and efficient magistrate and lastly, in the field he was equalled by few and surpassed by none. Thus lived and died this fine exemplar of the good old English gentleman, beloved by all around him and lamented by every survivor."

A poem, imagining that this larger than life personality would surely be resurrected and written by a Mr Heyrick goes:

Oh! How could you bury our neighbour so soon!

Why, his boots were just blackd, and his fiddle in tune.

As a staunch, steady sportsman, and quite orthodox.

Hed been taking a glass to the hounds and the fox.

In his moments of mirth, he would sometimes drink deep;

When you thought he was dead - he was only asleep!