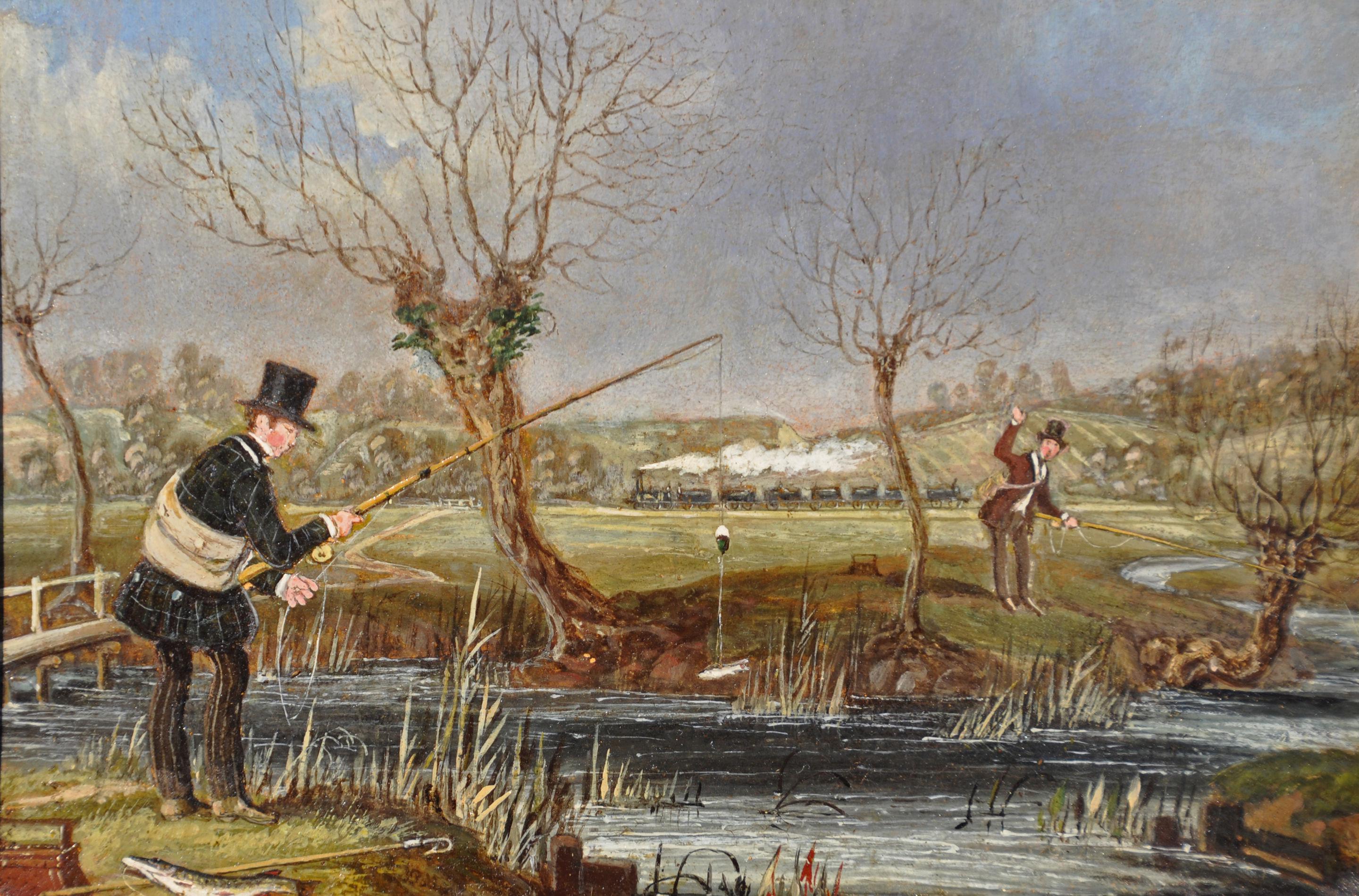 James Pollard is probably most renowned as a painter of coaching scenes and this aspect of his work is important as a document of that period and mode of transport. However he also depicted fishing, racing and hunting, occasional horse portraiture, field sports and cricket and collaborated with John Fredrick Herring Snr on some of the latter's racing pictures, contributing crowd scenes and backgrounds at which he was particularly adept.

He was born in Islington in 1792 and was the second son of the topographical painter, engraver and publisher Robert Pollard. The father had come to London from Newcastle in 1774 and had been apprenticed to Richard Wilson, RA as a marine and landscape painter but later turned to engraving studying under Isaac Taylor of Holborn. The young James was instructed in painting by his father who advised him at an early age to concentrate on horse painting although he also studied etching and engraving with Thomas Bewick and worked in the family business - R. Pollard and Sons - producing prints. When he was fifteen, Pollard Snr wrote to Bewick that he "…would like him to see James's pictures of horses after Ben Marshall, as I am trying to make him a painter in that line." The influence of Marshall's interest in depicting animated throngs of people and horses is apparent in Pollard's work but whereas Marshall portrayed them in a broad manner and more subordinate to the principal subject at the forefront of the work, Pollard, with his familiarity with engraving, depicts them in a more meticulous and delineated way.

Edward Orme who was the King's print seller, had seen some of James' oils and was suitably impressed to commission him to paint an inn signboard depicting a mail coach and horses. Upon completion, this was displayed in Orme's Bond Street shop window where it was spotted and admired by many including Prince Esterhazy, the Austrian Ambassador. Commissions ensued and it in a short space of time Pollard had established himself as a sporting painter.

James Pollard continued to work with his father even as he was becoming increasingly involved with painting and although he had become a master of the aquatint process the upward trend of his painting career and its commitments marked the decline of the family printing business and by 1831 it was finally dissolved. His paintings were popular and many of them found a broader market through engravings. About 343 of his works were engraved in total of which Pollard himself engraved 146 with the rest produced by his father, R Havell, J Harris and others. James also engraved 23 plates after works by other artists.

He had shown his first painting at the Royal Academy "North Country Mails at the Peacock, Islington" in the Royal Academy in 1821and in 1825 he married Elizabeth Ridley and they had several children. The decade of 1830 to 1840 marked the high point of his career and although he still produced some coaching scenes his output shifted to more steeplechase, racing, angling and cricket subjects. However this successful period was drastically checked by the death of his wife and daughter in 1840 which had a deleterious effect on him. He lost all will to paint and he even seemed to think that life itself was pointless. His other children were sent off to be looked after by aunts and this deep trough of despair was to last for two years before he resumed his career. During that period coaching scenes had diminished in popularity and Pollard turned more to depicting the newer omnibuses and hunting scenes. These later works lacked some of the zest and occasional humour that he had displayed earlier in his painting and gave the impression of being done just to earn a living. Even his relationship with his father was foundering and the general decline of his life caused him to eventually seek help from the Artist's Benevolent Fund in the latter stages of his life. During this period he was also living at 22 Robert St in Chelsea with his son where he died on 15th October 1867.

Pollard worked hard and he spent a lot of time travelling to reach the locations of his paintings. This was strenuous and he liked to relax from his professional life with involvement in field sports with shooting and fishing being his favourite. His preferred location for the latter was the River Lea at Waltham Abbey and this spot was used for some of his charming angling pictures. He painted one painting which epitomised the joy of his involvement in these sports. The intimate work "The painter, his son, and a friend, after a day's shooting" produced in 1846 depicts Pollard with his eighteen year old son James Robert and a friend seated round a game-covered (mostly rabbits) table with dogs at their feet enjoying a smoke and drink.

Because of his success augmented by being able to advertise his work through the sale of prints, James Pollard did not need to show many at the London exhibitions but he did exhibit five at the Royal Academy, three at the British Institution and four at the Royal Society of British Artists. Examples of some of his works include: "Trolling for Pike in the River Lee,"

"Fly fishing on the River Lee near the Ferryboat Inn," (both at Tate Britain), "A cricket match at Copenhagen House, Islington," "The Finish of the Boat Race at Mortlake," "View of Hammersmith Broadway and Queen St.," " The 1839 Derby, Bloomsbury beating Deception," "The St Albans Grand Steeplechaseof 8th March 1832," "Coursers taking the field at Hatfield Park, Hertfordshire, the seat of the Marquess of Salisbury," "The Duke of Wellington inspecting his troops," "Election riot at Coventry," "Partridge shooting" and "Fox leaving cover."

The Art of Cricket - Robin Simon and Alastair Smart