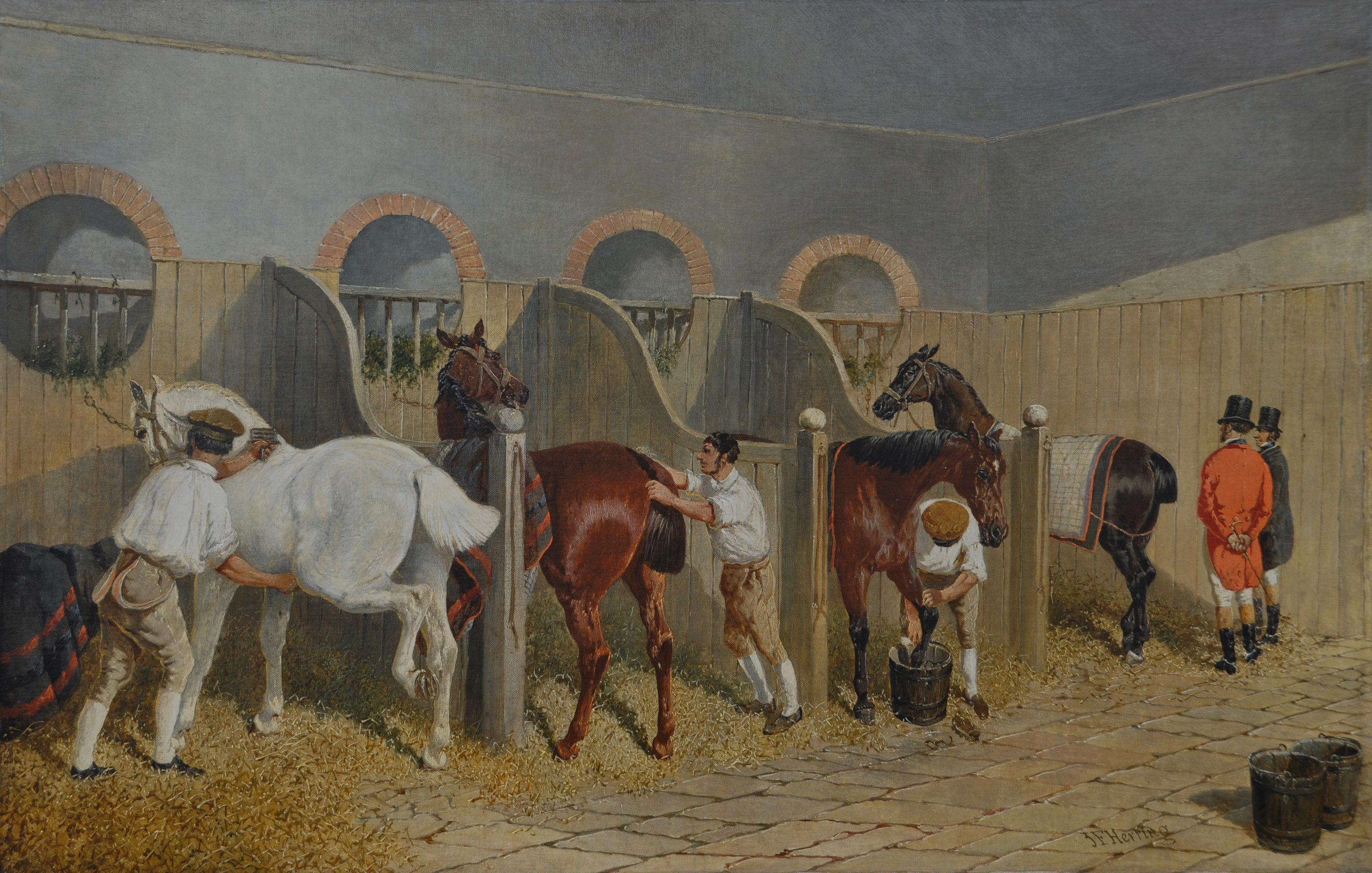 There is some confusion as to his date of birth because another John was born in 1815 but it is probably the case that this one died very young. John Jnr. was probably born in 1820 but was definitely baptised with his sister Sarah on 22nd May 1821 at St Mary's Doncaster. He is believed to be the first of the three sons to assist his father but it is also thought that the other two sons, Benjamin Jnr and Charles, had a major disagreement with their father over John Jnr. working so closely in his father's style and signing almost identically.

John Jnr. spent the later part of his life at Fulbourn near Cambridge having married an artist, Kate Rolfe but earlier in his career had lived in various addresses in London in areas such as Piccadilly and Haymarket. His hobby was apparently constantly adding bits to his house, a pursuit that nearly caused his death with the collapse of an arcade which he was constructing. Despite his father's concern that his son's heavy smoking - the former asserting that "for he would smoke six pipes at a time" he lived to a ripe old age, dying in Cambridgeshire in 1907.

Despite imitating much of his father's work, particularly farmyard scenes, John Jnr was a very competent artist who well understood his subject matter and was of the opinion that to really know how to paint horses one had to be "brought up in the stable". He worked in both oils and watercolours and his early work is very close to that of his father, particularly in subject, although can usually be differentiated by being more tightly worked and without his father's confident fluidity. John Frederick Herring Snr was a master and his eldest son, despite being an excellent painter, was not quite as good and this is reflected in the prices for the two.

John Jnr exhibited fifty-three works at the Royal Society of British Artists at Suffolk Street, fifteen at the Royal Academy, ten at the British Institute and four at other venues. These included titles such as: "The Meet - Full Cry - and the Death", "Watering the Team", "Horses, Pigs and Poultry", "Going to Plough" and "A Misty Morning"

This painting is a version by John Frederick Herring Jnr of his father's renowned work of the same title which is now in the collection of Tate Britain. The father's original work was item number 2 from the set of four which went under the title of "Stable Scenes" and the set was no. 457 on the J Harris list. Each engraving was 17 x 26 inches although a smaller set at 71/2 x 12 inches was published also subsequently by Fores. The other titles which comprised the set were: 1) The Mail Change; 3) The Team; 4) Thoroughbreds. They were engraved by J. Harris in 1844, from Fores's Stable Scenes and published 10th February, by 1846, Goupil & Vibert, Paris.

The painting was purchased from the artist together with 15 others by Messrs Fores and was subsequently sold at Christie's 5th May 1864.

In Bell's Life, the critic has written of the painting: "Represents the interior of the hunting stable with four stalls, in which there are four perfect pictures of what every hunting man would like to possess, bone and muscle - and symmetry of the most perfect cast, three of the animals are under the hands of grooms in workmanlike attitudes, while the fourth stands the admiration of his master and his friend."

The set of prints became very popular and it is possible that somebody who had seen or owned a copy of the print commissioned J F Herring Jnr to paint an oil version. There are some slight differences between the two works but in most respects they are identical.

The Dictionary of British Artists - J Johnson and A Greutzner