A view of the Thames looking east with Westminster Bridge in the distance, Randalls' Mill in Nine Elms in the right foreground, Lambeth Palace and St Paul's beyond with Westminster Abbey on the left 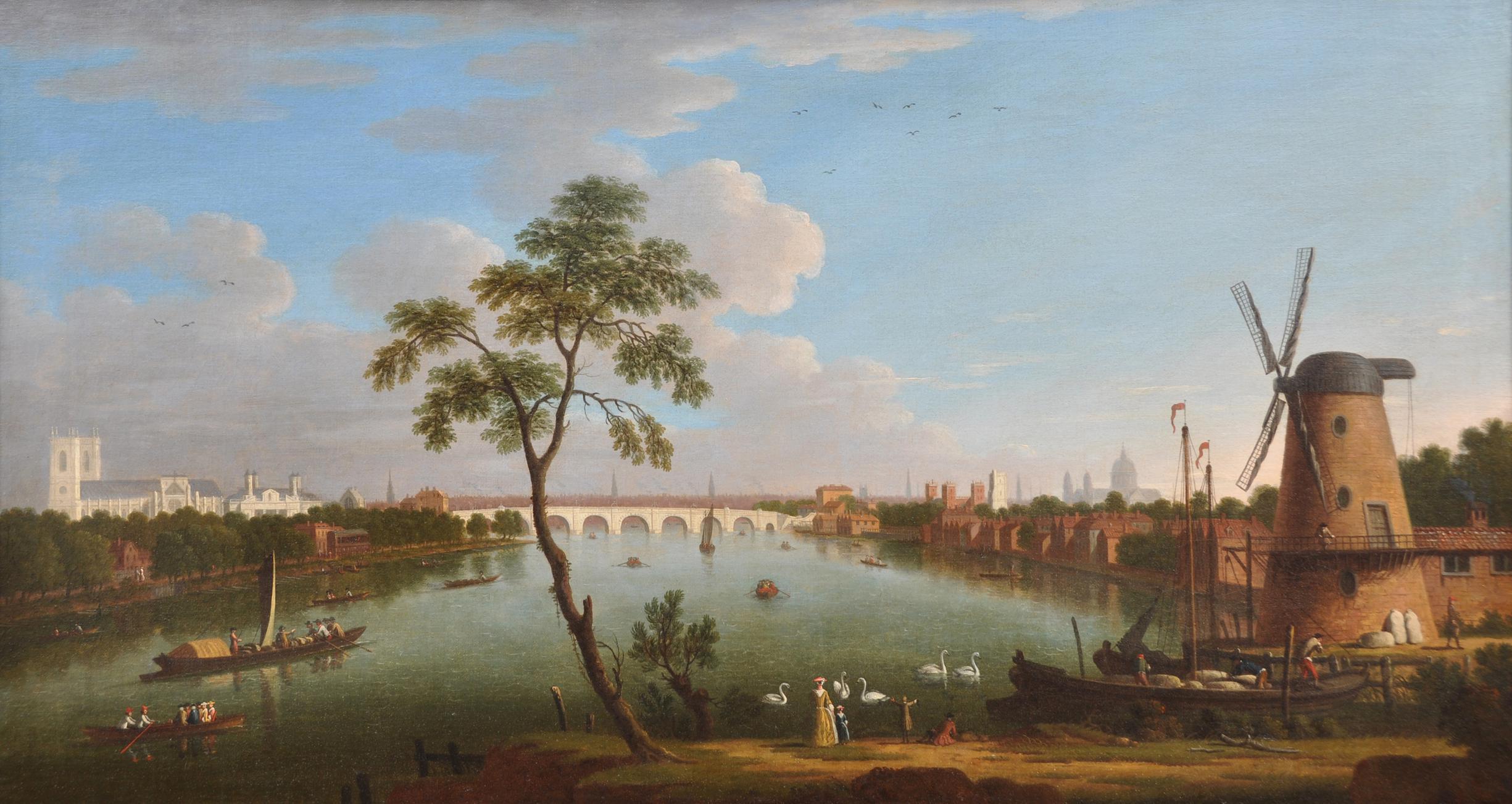 A view of the Thames looking east with Westminster Bridge in the distance, Randalls' Mill in Nine Elms in the right foreground, Lambeth Palace and St Paul's beyond with Westminster Abbey on the left

Pieter Tillemans was born in Antwerp in 1684 but came to England in 1708, becoming a significant artist in his adopted country, particularly in horse painting where he was among the forefront of equestrian painters who revolutionised the depiction of that subject.

He was the son of a diamond cutter and the brother-in-law of the renowned flower and bird painter, Pieter Casteels. The two young artists were encouraged to come to London by a picture dealer called Turner and they worked for him as copyists. Apparently, Tillemans was particularly adept at recreating the work of David Teniers as well as the French battle scene painter, Jacques Courtois. His proficiency rapidly gained him a prominent reputation in art circles and his depiction of horses was particularly noted. So quickly had he attained a high standing that in 1711, he was part of the group of leading artists who met in Great Queen Street, London, to set up the country's first Academy of Art.

The principal source of his independent work early in his career was for drawings commissioned by John Bridges in 1719 to depict topographical scenes of Oxford, but mainly views in Northamptonshire, to be used as illustrations for his History of Northamptonshire. Bridges hired him to produce five hundred Indian ink drawings and paid him a guinea a day plus board and lodging. This work was not published until after the death of both the artist and the writer but for Tillemans, it was an introduction to the increasingly popular depictions of grand country houses and their environs. He joined the group of other Netherlandish painters such as Thomas Wyck, Jan Siberechts, Leonard Knyff and Pieter Andreas Rysbrack who had found favour in England and were highly adept at these works, often on a very large scale with some shown from an elevated perspective. Tillemans' paintings of this type, usually with figures, often actual portraits, in the foreground, evoked the feeling and sensibility of the English landscape. Examples of this type include: "A View of the Garden and main Parterre of Winchendon House, Buckinghamshire", "Chirk Castle from the South", "Newstead Abbey, Nottinghamshire" and "A View of Uppark".

Tillemans had become a favourite with the nobility and country squires of England as highly proficient at depicting their seats but it was his all-round ability as an artist, able to paint landscapes, portraits, conversation or 'fancy' subjects, stage scenery (with Joseph Goupy for the opera) and horses that saw him develop into one of the founders of the sporting conversation piece together with James Seymour and John Wootton. These three influential artists were all members of the Virtuosi Club of St Luke and Tillemans became a steward of this body in 1725. He and Wootton were friends and they occasionally worked together but although the former had closely studied racing prints after Francis Barlow, Tillemans moved further from the darker tones of that painter and consequently his paintings tend to be rather airier, almost rococo, than Wootton's.

Royalty and the nobility met at Newmarket for the season and eminent artists were there to record the event. Tillemans was one of these and in 1722 he produced a large panoramic painting "George I and his Court on Newmarket Heath". In about 1723, he painted another large work of Newmarket Heath (now in the Government Art Collection) and other examples include: "Starting Point of the Beacon Course at Newmarket" and "End of the Beacon Course".

The combination of country houses, horses and sporting pursuits and portraiture in painting had an eager market and it is for this that Tillemans is most renowned today with works such as "Going-a-hunting with Lord Byron's Pack of Hounds", "Two Racehorses with Grooms and Hounds in the Park at Newstead Abbey, Nottinghamshire" and "Three Hounds with a Sportsman, a Hunt to the left". Commissioned for some of the grandest houses in the realm such as Chatsworth, Thoresby or Newstead, they fulfilled the expectations and cheerfulness present at the time and done in a "…beautifully clear and airy manner" (M H Grant). His patrons included the Dukes of Rutland, Somerset, Devonshire and Bolton and the Earls Spencer, Portmore and Derby.

However Tillemans seemed not content with just this genre of painting and turned his attention to depicting some of the grandest views in his adopted country. Paintings such as "London from Greenwich Park", "The Royal Hospital, Chelsea", "The Thames at Twickenham", and the magnificent 43 x 91 inches "View of the Thames from Richmond Hill" which Grant considers "…one of the grandest English prospects ever painted…"

In addition to this work, he utilised his prowess at both portraiture and equestrian painting to produce some history and battle scenes. "Charles 1's declaration to his Gentry and Army in September 1642" was of course an imaginative work but the "House of Commons in Session" and "Queen Anne in the House of Lords" together with other ceremonial works, were records of the time. His battle scenes such as "Battle of Glenshiel" and the "Battle of Belgrade" were probably commissioned commemorative works done retrospectively but his fine understanding of horses and how to paint them, gave these works movement and vitality.

Tillemans also had an influence on some well-known portrait and conversation piece artists as he was the teacher of Arthur Devis, Pieter Angellis and Joseph Francis Nollekens. He was also drawing master to the fourth Lord Byron and his children. His own portrait was painted by Hans Hysing.

He had always been afflicted by asthma and he decided to retire to the country to benefit from the better air. This prompted the sale of his collection in April 1733 which proved him to be an avid and discerning collector for there were works by Rembrandt, Raphael and Poussin among others. However the move did not augment the longevity of his life for he died on 5th December 1734 at Norton in Suffolk. The house belonged to one of his patrons, Dr. Cox Macro who was Chaplain to George II and Tillemans was working on a commission for him. Apparently, he was working on a horse in a painting on the morning of his death. He was buried at Stow Langtoft nearby.

Randalls Mill, which was situated by the creek of the River Effra as it joined the Thames, was a tower mill. It was the largest of the three windmills in Nine Elms and was known as Randall's from circa 1770 to 1829 when it was run by John Cornwall.

It was a stone-built wind-driven corn mill with three storeys above the wharf and originally had four sails which later became double-shuttered with the addition of a fantail. Historians are divided as to whether it was always utilised as a corn mill or whether it was later associated with the manufacture of either starch, a local china mill or cement factory.

Nine Elms, or Nyne Elmes as it was known in the mid-17th century, was a low-lying marshy area with osier beds which flooded regularly. The name was derived from the pub which was situated on the south side of the lane close to the river bank with elm trees in front of it. This brewhouse and inn, together with a farm, had been among the earliest buildings in the area and was mentioned in a report in 1645 by Battersea churchwardens and there had also been a fort in the nearby, according to William Lithgow's Survey of the Civil War defences of London in May 1643.

A hamlet had grown up at the very tip of the parish of Battersea and probably owed its growth to the fact that it was on the stretch of lane which ran for about two hundred metres along the Thames bank. This lane was connected to the Wandsworth turnpike and would be the first that travellers from London would encounter on their way to Battersea.

Despite its swampy ground, it began to attract industry with the windmills and a water mill. The latter was a tide mill which had been set up in about 1760 by David Ponton and was still in use in the mid-19th century. By the time of the early 1700s, Nine Elms had become the main industrial area around Vauxhall with timber companies lining the riverbank and docks and jetties specifically for timber and lime to be loaded from the wharfs on to barges also appearing. Other businesses which could take advantage of the access to the river transport and plenty of water such as potteries and brewing, also became established. There was plenty of work to be found in support of this industry which apart from labourers and factory workers also included barge owners, lightermen, suppliers of hay and straw for horses, peddlers, contactors and sack hirers.

Nine Elms and Randall's Mill also features in paintings by Samuel Scott, whose 1765 west-facing painting (now in Tate Britain) towards the setting sun, depicts Nine Elms Pier with a row of elms behind which are presumed to be the ones after which the hamlet became known. They also appear in works by John Varley, Pieter de Wint and a drawing by S. Owen which was engraved and published in 1809.