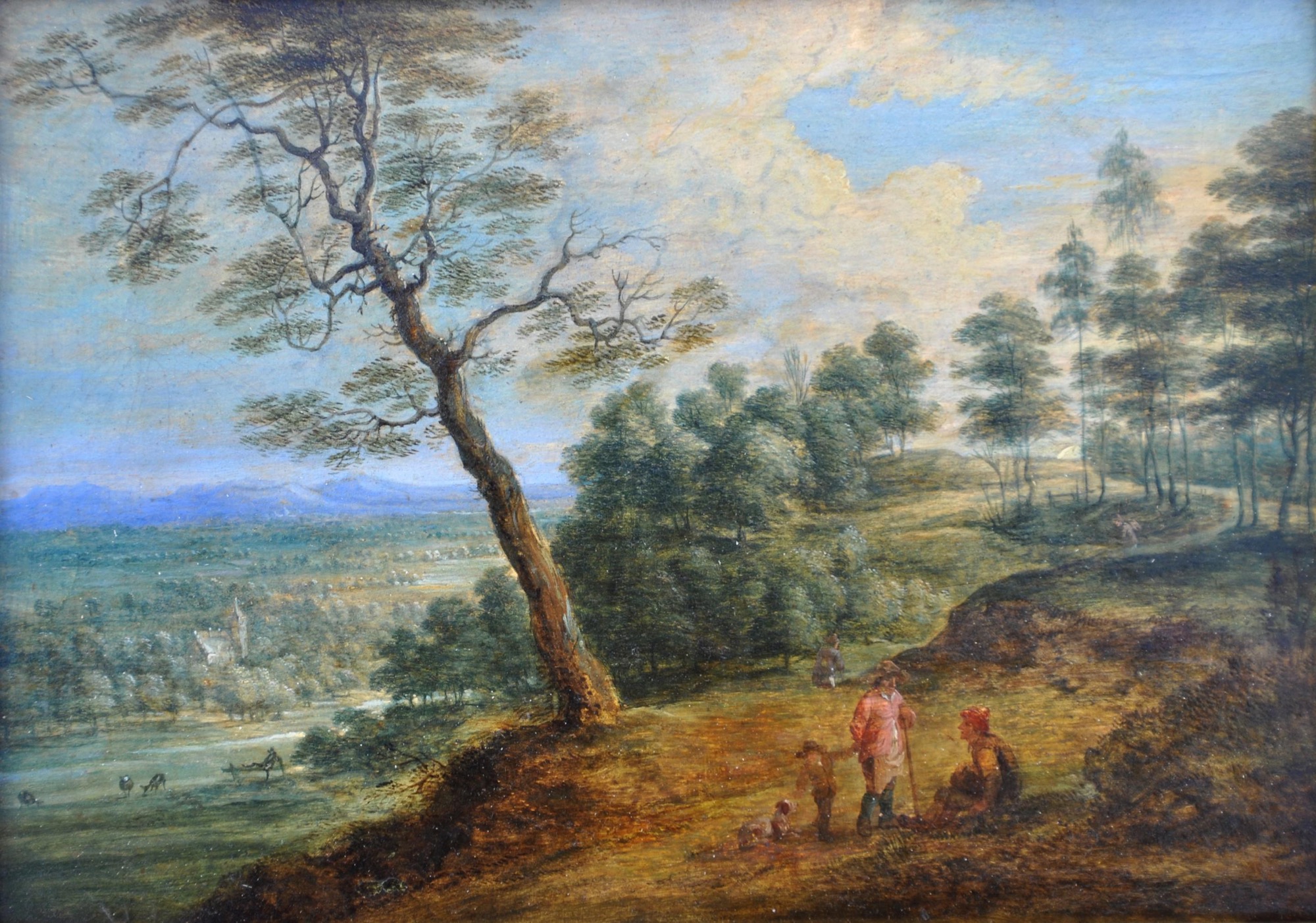 An Extensive River Landscape with Travellers in the Foreground and;

Extensive River Landscape with a Shepherd and Sheep

Oil on panel, a pair

Lucas van Uden was born in Antwerp on 18th October 1595, the son of the landscape painter Artus who was Free Master of Antwerp in 1586. Lucas's younger brother Jacob, c1605 - after 1629, was also a landscape painter.

Lucas was a pupil of his father and is also believed to have been part of Rubens's studio and a contributor of landscapes to some of his paintings, but there are no archival records to attest to this. In 1626 he became a Master in Art at the Guild of St Luke and on 14th February 1627 he married Ann von Woelput with whom he had eight children.

From 1641 he was master to pupils in his studio including P A van Immenrat, J B Bonnecroy, G Neyts and J Vergouwen. In March 1646 he obtained a passport to travel abroad and he went to Rhenania to work but was back in Antwerp later in the same year. 1649 saw him working in Brussels but most of his life was spent in Antwerp, finally dying there in 1672 or 3.

Jan Wildens and Lucas van Uden are considered the foremost Flemish landscape painters among the contemporaries of Rubens and van Uden's vast panoramic landscapes reveal the influence of both Joos de Momper II and Rubens, the latter in particular eliciting considerable admiration from van Uden and influencing his painterly brushwork. In contrast his small-scale landscapes suggest the influence of Jan Brueghel I and Paul Bril.

His paintings are quite distinctive in their format: there is a bluish-green tonality and hills or wooded slopes rise to one side of the painting while the other offers a distant view of a spacious Flemish landscape traversed by a river. In the foreground are tall trees with contorted trunks and mannered foliage and figures of travellers, wayfarers, Biblical or mythological characters. These were often contributed by the renowned figure painters David Teniers II, Hendrick van Balen, Frans Francken II, Pieter van Avont, Gonzales Coques, Jacob Jordaens, Pieter Bout and J B van der Mieren. Interestingly, unlike many landscape artists of the time, van Uden scarcely ever painted winter scenes.

In addition he was a draftsman and etcher and in the latter discipline he sometimes worked after Rubens and the Venetian masters.

Paintings by Lucas van Uden can be seen in many museums and collections including among others: Louvre in Paris, Fitzwilliam in Cambridge, Hermitage in St Petersburg, Hampton Court in London, Hamburg, Munich, Madrid, Moscow, Leningrad (Hermiatge), Antwerp, Glasgow, Milan, Brussels and Berlin.