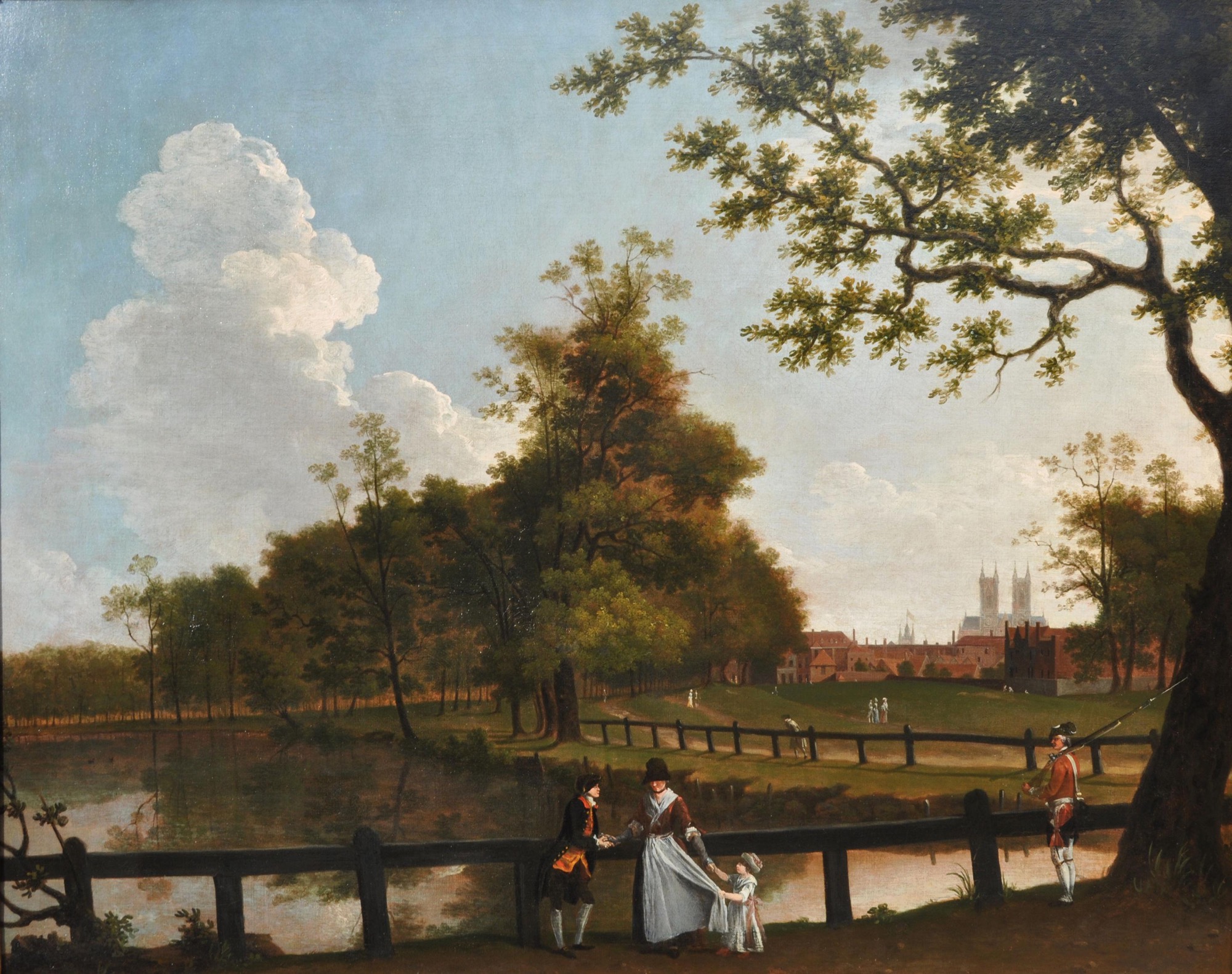 Possibly the painting exhibited at the RA in 1774 no.86

John Feary was a pupil of the eminent landscape painter Richard Wilson RA and entered the Royal Academy Schools in 1769. He developed a style of view painting in both watercolours and oils which was particularly suitable to be engraved for topographical volumes and periodicals.

He was a London based painter, sending his exhibits from addresses predominantly in Westminster such as Dean's Yard, Old Palace Yard and Millbank but also from Haymarket and Northumberland St. He painted London scenes but also travelled extensively around England, depicting gentlemen's seats in Lancashire, the Lakes, Oxford, Cornwall, Devon and Somerset.

Between 1770 and 1788 - when he died - he exhibited twenty-five works at the Royal Academy and four at the Free Society in London at which he was awarded a "Premium" in 1766. Titles of some of these exhibits include: "A view of a storm breaking from the Surrey side of Westminster Bridge", "A view taken from Highgate Hill", "A view in Mr Thornton's Garden Clapham", "View of Blenheim, the seat of the Duke of Marlborough", "View of Killerton, the seat of Sir T Ackland, Bart., near Exeter, Devon", A view of Windermere Lake, Westmoreland taken on Furness Fell, Lancashire" and "A view of King John's Barn, Eltham".

The engravings of his paintings were popular at the time, making distant scenes visually accessible to those who purchased the relevant volumes. In May 1778, Feary and Samuel Buck published by subscription a set of four prints done from drawings in Yorkshire. These

depicted views of St Robert's Chapel, Knaresborough, Devil's Arrows near Boroughbridge, Giggleswick Scarr on the road to Kendal and sun dial near Settle. Prints taken from other oil paintings and watercolours by him were published in West's "Guide to the Lakes" in 1780 and Watts' "Views" in 1785 among others.

There are references to the fact that Feary had some physical deformity. John Thomas Smith in his Nollekens and his times annotated by Wilfred Whitten and printed in 1829, concerning the life of the conversation piece painter Joseph Francis Nollekens, writes: "Nollekens observed one morning , after he had attended Sir Joshua's lecture at the Royal Academy the preceding evening, that he believed all the deformed students in the Academy had assembled together under one spot while waiting the opening of the lecture-room since he had noticed Ryley, Flaxman, the two Edwards's, Crone and Feary."

The British Museum has a print engraved by Watts after one of his paintings showing Armwell from London Road and the Yale Center for British Art (formerly the Paul Mellon collection) has a particularly fine oil painting "View of One Tree Hill, Greenwich" which is almost as much a conversation piece as a scene painting and is somewhat reminiscent of the early work of Francis Wheatley.

Dictionary of British Watercolour Artists up to 1920 - H C Mallalieu

In mediaeval times, St James's Park had always been a low and swampy meadow and had been the property of the Hospital for Lepers but this establishment was taken over by Henry VIII and converted into "our Palace of St James's." Henry had it drained and the area enclosed to be used as a "nursery for deer" as well as "an appendage to the Tilt-yard at Whitehall."

This was initially a small brick-walled enclosure but the king soon extended its boundaries from his Palace at Westminster to form a large circular chase running from St Giles-in-the-Fields up to Islington, round Highgate and Hornsey and Hampstead Heath and then back again via Marylebone, St Giles's to Westminster. None of his subjects was permitted to hunt or hawk within those boundaries. Henry's children, Mary and Edward VI, did not share their father's attitude to the area and gradually allowed it to become "disafforested".

The stretch of water in the south-west corner near Birdcage Walk and opposite Buckingham Gate became known as Rosamund's Pond. It had been created to receive the water of a small stream which trickled down from Hyde Park. It was filled in during the 1770s following the Crown's purchase of Buckingham House.

It had a reputation as a place of assignation where married women could meet with beaus and was often referred to in comedies of the 17th and 18th centuries and Hogarth depicted it in two of his satirical prints.

Alexander Pope made mention of it in the Rape of the Lock:

"This the blest lover shall for Venus take

And send up vows from Rosamunda's Lake"

and The Maid's Last Prayer, a comedy by Southerne, has a similar theme in one of the dialogues.

In A New Critical Review of the Public Buildings, the author writes that: "Rosamund's Pond is another scene where fancy and judgement might be employed to the greatest advantage; there is something wild and romantic round the sides of it, to which a genius could make a fine use, if he had the liberty to improve it as he pleased. The banks of it ought to be kept in better repair; and if Venus in the act of rising from the sea with the Graces round her were raised in the midst of it, it would be neither an improper nor an useless decoration"