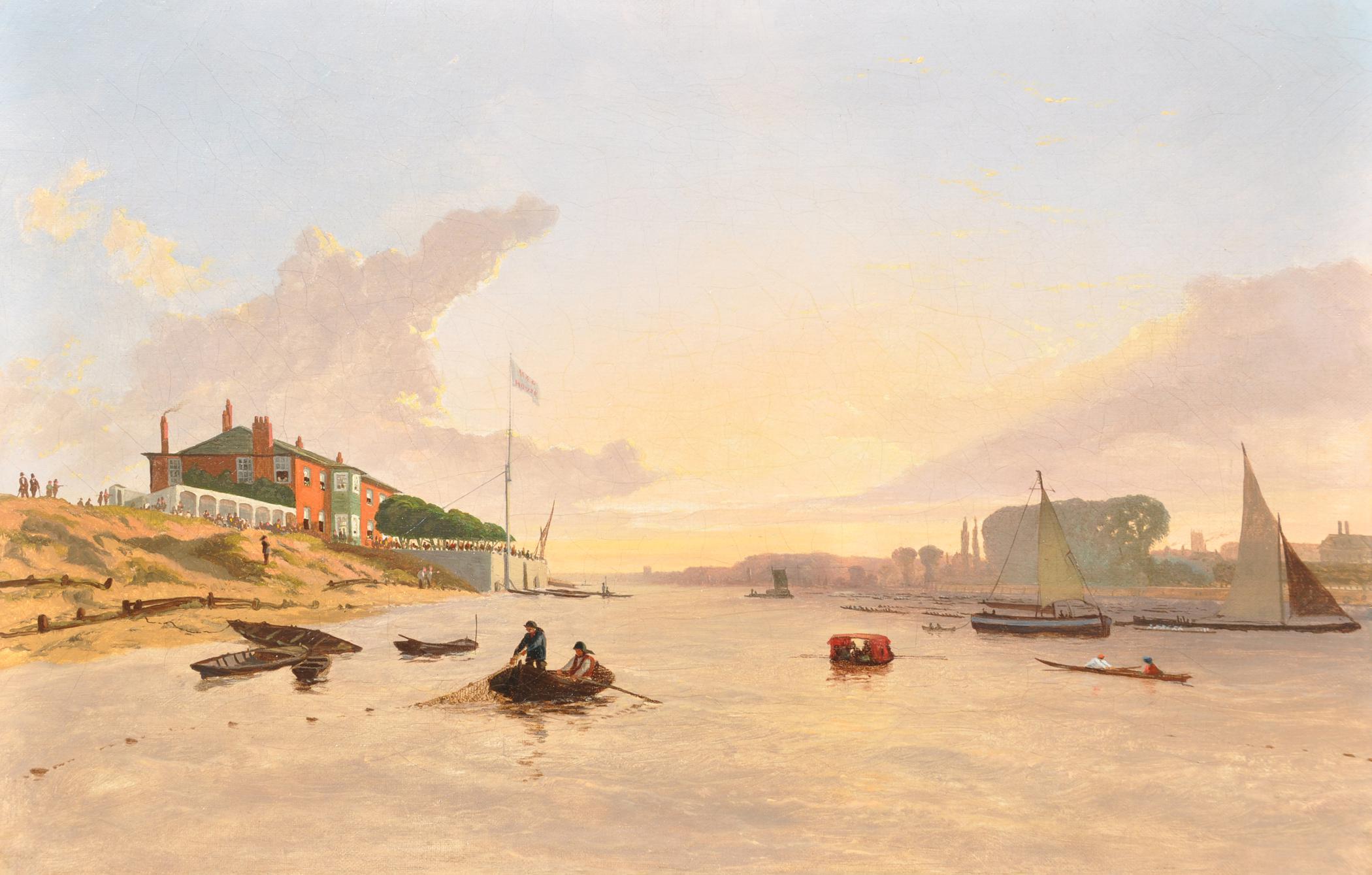 Charles Sims lived at 14 Doris Street, Kennington from 1829 to 1841 and his first Royal Academy entry in 1829 uses that address. Then, subsequent to 1841, addresses elsewhere in London including Portland Place, Westminster Bridge Road and Golden Square were utilised. There has been some confusion as to the identity of other artists with very similar names (there is also a record of a G Simms a C Sims and a G Sims at the same address) but in Algernon Graves's British Institution and Royal Academy exhibition catalogues it states: "It is difficult to say whether the above list represents the work of two artists. C Sims is correct up to 1843 as he lived with G Sims, but he may have altered the spelling of his name in 1844." All the works under various spellings are of similar subjects and depict the same regions and are stylistically so close as to evince that they are one and the same and it simply could be that the name was misread on exhibition labels.

Sims was a prolific landscape painter in both oil and watercolour - some of which were of a significant size - whose work was popular during his career. He depicted scenes along the Thames and elsewhere in London as well as Windsor and the Home Counties of Kent and Surrey, Devon and also in Belgium and France. He had great skill in translating the effects of light on foliage and water on to his canvas which imbues them with a warmth and limpid glow.

He showed twenty-four works at the Royal Academy, thirty at the British Institute and sixty-three at the Royal Society of British Artists. Titles of exhibited paintings include: On the Thames; Battersea Bridge; View from Battersea Fields; Eton College; The Thames from Lambeth; Afternoon near Goudhurst; On the River Webber, Buckland, Devon; Fish Market, Calais; On the Scheldt; and Clearing up after a shower. The Victoria and Albert Museum has Coastal Scene at low tide - moonlight in its collection.

In the mid-19th century, the area known as Battersea Fields was a flat and unbroken wilderness of about three hundred dark and dreary acres formed of intersecting streams and dense reed beds frequented by prowling vagabonds, ruffians and costermongers. However it was renowned also for racing, gambling and shooting was also popular with the game including pigeons, pheasant, sparrows, starlings and almost anything else that moved. In 1840, a volume entitled Kalendar of Amusements by Colburn states that: "…pigeon-shooting is carried on to a great extent in the neighbourhood of London; but the Red House at Battersea appears to take the lead in the quantity and quality of the sport, inasmuch as the crack shots about London assemble there to determine matches of importance, and it not unfrequently occurs that not a single bird escapes the shooter." The grounds of the Red House were the location for the cream of society to partake in pigeon shooting until changing fashion saw it superseded by the Hurlingham Club.

There were also unlicensed fighting events, organised dog fights and what was euphemistically called a "country fair" that took place on a weekly basis and which catered for the coarser and darker elements of Victorian society. It was almost a no man's land where the police held no sway and although the weekdays were bad enough, on Sundays it reached a different level with riots occurring at any moment.

Because of its disconnected situation and character, it had also had a long reputation as a location for duelling and one of the most notorious of these happened in 1829. The Duke of Wellington played a significant part in the passing of the Catholic Relief Bill through Parliament which was a controversial issue. The young Earl of Winchelsea, a leading member of the anti-Catholic party, published a personal and vitriolic attack on the Duke who attempted in vain to persuade the earl to retract the charges. When no apology or retraction was forthcoming, the Duke challenged him to a duel and the date was set for 21st March in Battersea Fields. The Duke missed with his shot and Lord Winchelsea, probably finally realising that pragmatism and good sense should prevail, fired in the air then tendered his apology. The reed beds had also been the hiding for Colonel Blood's 1671 assassination attempt on Charles II.

A light in the gloom of this area and its debauchery was afforded to some extent by the tavern known as the "Red House", or by locals as the "Red'us." This building was situated about fifty yards from a fording point across the Thames which had long been thought to be the point that Julius Caesar crossed the river in pursuit of the retreating Britons. Sir Richard Phillips observed that when looking from the Red House across to Ranelagh and Chelsea Hospital opposite: "At ordinary low water, a shoal of gravel not three feet deep, and broad enough for ten men to walk abreast, extends across the river…"

There had been a building there since Tudor times and it had been a place of destination for the wealthier citizens of London to take a boat and then promenade the area or read poetry or paint at the Red House or the causeway between the marshes and the river. This persisted through to the 19th century and in the The Mirror of Literature, Amusement, and Instruction an article included in the edition of 23rd December 1843 reports that: "Among the numerous houses of public resort on the fair margin of the river of Thames, few have been more largely patronised, or are more generally known to all classes, than the Red House at Battersea. During the summer months, thousands repair thither to enjoy the delights of a short water excursion, and the smiling landscape by which it is surrounded." There were seven dining alcoves in the establishment and the 10 o'clock "Flounder Breakfast" was as renowned as the "Whitebait Dinner" at Greenwich.

It was not only the land around the Red House that provided sport and entertainment for its situation provided an ideal place to have the winning-post for many boat races. These races, often starting at Westminster Bridge, drew large and enthusiastic crowds. The 1826 edition of the Good Fellows' Calendar includes a piece that says on 18th August 1825: "Mr Kean, the performer, gave a prize wherry, which was rowed for by seven pairs of oars. The first heat was from Westminster Bridge round a boat moored near Lawn Cottage, and down to the Red House at Battersea." All the other heats ended there also and the Calendar goes on to say that as crowded as Westminster Bridge was with spectators: "…the Red House was the place where all the prime of life assembled." The original Oxford and Cambridge Boat Race on the London stretch of the river was in 1826 and ran from Westminster Bridge to Putney with the Red House affording a favourite viewing point.

The reputation for more organised and convivial gatherings became subordinate though to one of scandal, crime and disgraceful behaviour and the government had for some years been considering taking steps to bring the area under control. This coincided with reforming ideas of social change and included the provision of public parks on the fringes of the metropolis. One of these was the area of Battersea Fields and the Government bought the Red House and its adjacent premises and shooting grounds for £10,000, the building was demolished in 1850 and spoil excavated from the building of Surrey Docks was used to landscape the future park. In the Metropolitan Guide it states that it was "…destined to be shortly converted into a park, with an ornamental lake, walks, parterres, for the recreation and enjoyment of the people," and it was opened in 1858.