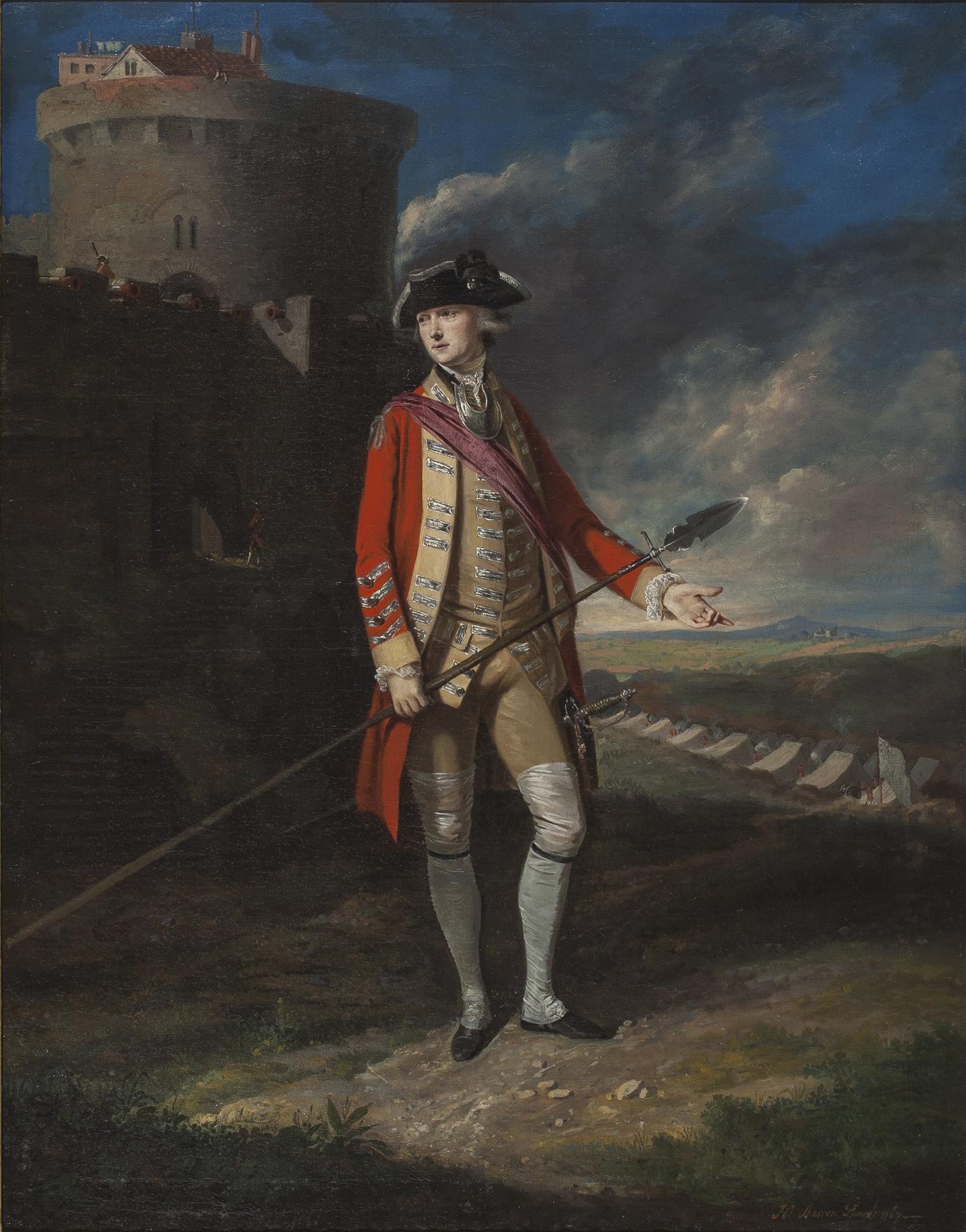 Hugh Barron, although a fine portrait painter and pupil of Sir Joshua Reynolds, seemed just as likely destined to become a musician. He was a child prodigy on violin and his ability was noted by various music lovers and he was invited to play his first concert on 23rd April 1760 at the Haymarket Theatre. It was billed as The Solos of young Performers who never appeared in Concert and featured musicians who were all aged between nine and thirteen. Events such as these, which demonstrated the great talent of youth, were popular in the eighteenth century and this concert had Gertrud Schmeling (later Mara) and the thirteen year old Barron on violin, James Cerveto on cello, and Esther Burney playing the harpsichord. The programme lists him as: "Master Barron, age 13, on the violin". His younger brother William Augustus, although not participating in this concert, was a talented violincellist.

Robert Walpole, in his Anecdotes of Painting in England, later observed that Barron had been a pupil of Felice di Giardini, the Royal Director of Music and leading violinist of his generation writing: "Painting is his profession but Musick is his amusement." Other music lovers at the time, including Alexander, 10th Earl of Eglinton, Dr Charles Burney and James Boswell were equally impressed by the young Barron and Boswell wrote in 1763: "…a boy of great genius, both as a painter and a musician, who will probably be a man of great eminence."

His father John was an apothecary at the Westminster Dispensary in Soho and it is not known what fostered the artistic drive and talent both in Hugh and his younger brother William Augustus who became a topographical landscape painter. So, despite being regarded as the best amateur violinist of his time, Hugh commenced his artistic training in 1764 at Fournier's Academy and was then apprenticed to Reynolds from about 1764 to 1766. He exhibited his first portrait at the Society of Artists in 1766 while still living and working with Reynolds.

In 1767, he moved into his own premises in Panton Street, Soho and established his own studio there and continued to exhibit at the Society of Artists up until 1778. He decided to travel to Rome to further his training and gain commissions and went via Lisbon in 1771 where he produced some conversation pieces for the British Colony there. He arrived in Rome in October 1772 and remained there until 1778. The sculptor Thomas Banks, writing to Nathaniel Smith on 31st July 1773 from Rome, states that Barron "…has great merit in the portrait way…has the most of Sir Joshua's fine manner of any of his pupils, and it is beyond doubt, that when he returns to England, he will cut a great figure in his way."

Indeed, in Barron's earlier portraiture such as the 1768 work just called Lady and now in the Corcoran Gallery in Washington, he was very close in style and technique to Reynolds. In fact, so close was this work in quality that it was previously thought to be by Reynolds and the reattribution came about only after cleaning when Barron's signature and date was discovered. However, from about that time, while Reynolds' influence can be still perceived, it becomes apparent that Barron had studied also the paintings of Johann Zoffany and he produced a number of works which are particularly redolent of Zoffany and the 1768 painting of the Children of George Bond at Ditchleys, now in Tate Britain, is a good example.

Barron returned to England in 1778 and settled first at 7 King St, Covent Garden before moving and sending his works for exhibition at the Royal Academy from "Next door to Saville House, Leicester Fields". He exhibited four times at the RA from 1782 to 1786 with fairly minimal descriptions such as "Portrait of a Gentleman half-length" or "Portrait of an Officer" and his twenty-two exhibits at the S.A., all portraits, were similarly anonymous. There are some paintings where the sitter(s) can be identified such as "Portrait of Charles Edwin Wyndham and his son Thomas on a terrace" and "Conversation piece Portrait of the Perry Family in a woodland clearing." "Portrait of a boy holding a cricket bat, a spaniel at his feet" is more descriptive but remains unidentified like the other gentlemen and officers.
He was elected a Fellow of the Society of Artists in 1771 and Director in 1772.

It would seem that his confliction of interest between painting and music persisted as throughout his life he continued to be regarded the best amateur violinist in the country. Whether this meant that he produced fewer paintings in his later years is unknown. The print maker Valentine Green produced mezzotints after two of Barron's portraits, namely George Bridges Rodney, 1st Baron Rodney published 1st June 1780 and John Swan published in 1782. Copies of both of these are held in the collection of the National Portrait Gallery.

Apart from the aforementioned museums and galleries which hold examples of his work, others can be seen in: Abbot Hall Art Gallery (Henry Tufton11th Earl of Thanet), Fitzwilliam
(Francis Page of Newbury) and the Huntington Library in San Marino.

The officer depicted here, standing in what is almost certainly a European setting and probably in Germany as evinced by the castle, is wearing a Hanoverian uniform and is carrying a spontoon, sometimes called an espontoon or half-pike. It was only about half the length of the traditional pike measuring only about six or seven feet and came into use in the mid-17th century and continued to be used up until the end of the nineteenth century. Apart from the very early days, its function was never really for combat but was a symbol of officer rank. Officers saluted with their spontoons while in drill formation and they could use them also to convey orders. Standing one vertically on the ground indicated a halt, while tilting the point forward signalled a forward movement and backwards ordered a withdrawal.

Its head was more elaborate than that of the pike and often had a pair of smaller blades on either side of the main one. The example held by the officer in this painting is Germanic in style and is typical of that in that it is more ornate than the much simpler English ones. The double bubble between the cross guard and base of the double edged blade is common to the Germanic armies.

The officer's uniform, datable to the 1760s, has attributes common to foot soldiers of both Hanoverian and English armies in that they both wore red jackets which remained the case up until 1837, and had the large silver gorgets. There were two Hanoverian regiments, who wore identical straw yellow facings and silvery white lace, to which this officer could have belonged: the Von Schele and the von Wangenheim.

Following the end of the Stuart line in the English monarchy, the influence of Europe became more apparent in England in a number of ways. One of these was the army and whereas William III had used Dutch and Danish soldiers to augment his English troops in order to consolidate his authority and expand the early Empire, the Hanoverians relied more on Germanic troops, particularly Hessians of which 6,000 were used to help suppress the Jacobite rebellions, and Hanoverians. German troops were also used in Ireland and following the 1798 rebellion, Hanoverians serving in the British Army were routinely garrisoned there over the next ten years.

However, the role of the Hanoverians and Hessians was not only to suppress insurrection but also to bolster the defences of England against invasion, particularly from the French along the vulnerable south coast and in 1756 twelve thousand were deployed in this role. The German contingent in the army usually numbered between three and ten thousand (although up to 60,000 were utilised in the Seven Years War 1756-63) but did not always operate in conjunction with the English but often as a semi-autonomous unit and were, in the eyes of some, a mercenary army. They became a permanent part of Britain's operations in Europe and featured significantly in the War of Austrian Succession, the Seven Years War as well as the American War of Independence.

The Hanoverian contingents were at the heart of the armies of the Duke of Cumberland in the 1750s and of all the Germanic groups operating in the English Army, perhaps they were regarded the most compatible and dependable. This was partly historic as the Brunswick-Luneburg line became the Electors of Hanover and then the British royal family so there was an affinity, almost fealty there. Like the other Germanic groups, they received all their support and financing from the British state just as the British army did and although the general public were at first rather wary of these foreign troops serving on British soil, they came to appreciate the fact that they were helping to protect them from the old enemy, France. The perception that as they were of the same heritage as the Georgian kings further enhanced their status among the English soldiers and public and for this they were deemed more loyal to the English cause than their other auxiliary counterparts.