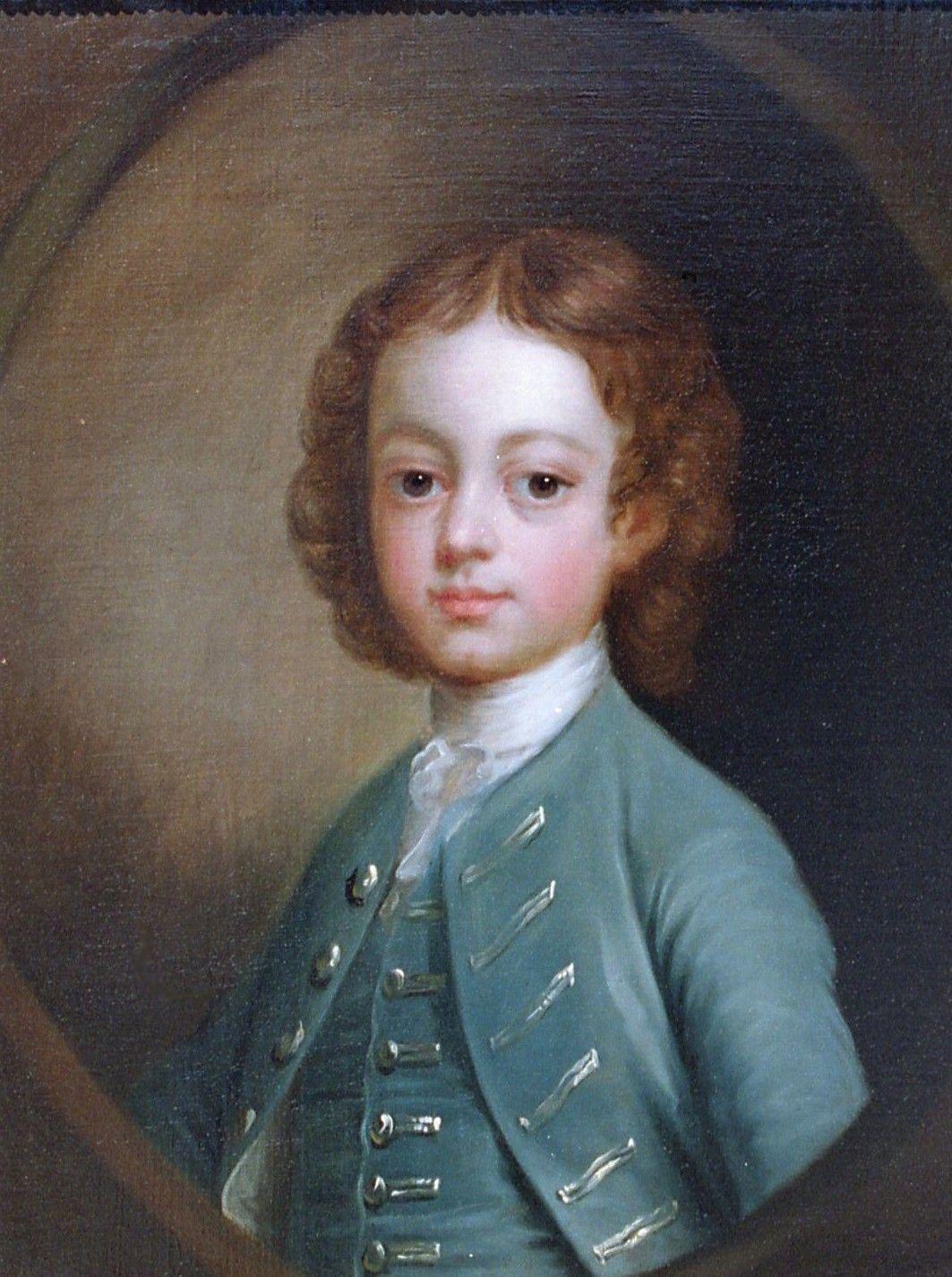 A Bust Portrait of a Young Boy in a feigned oval

Philip Mercier was an important painter of great ability who was one of the first in England to adopt the work of Watteau, doing so in the 1720s. He was one of the innovators of the conversation piece from 1725 and to produce the domestic 'fancy' picture from 1730. Such innovations are in themselves enough to commend the artist to our attention.

His personality and art were compounded of a number of foreign influences: he was born in Berlin in 1689 or 1691 to French Huguenot parents and studied painting and engraving firstly in Berlin at the Academy under the instruction of the French-born history and portrait painter Antoine Pesne. He then went to Paris and had worked also in Hanover before settling in London in about 1716. It was in Paris that he gained an intimate knowledge of Watteau's work, making engravings and, some maintain, actually producing forgeries of paintings. Since little substantial is known of his activity before he came to London, he is generally accepted as an English artist whose pleasant and often surprising work resulted from a naturally French inclination being modified by an English environment.

Mercier married in England in 1719 but travelled to France soon after. The specific reason is not certain but in 1724 he held a sale of pictures "collected abroad" so whether he was commissioned to find Master paintings in Europe or did so on his own initiative, cannot be established.

Being a German speaker was of significant benefit to the young artist especially in gaining contacts in the Hanoverian Court which was somewhat disconnected from its new environment. He was patronised by the courtiers and when Frederick, Prince of Wales arrived in England from Hanover, Mercier was appointed "Principal Portrait Painter" to the Prince, an office which he held from 1728-36, then "Page of the Bedchamber" in 1729 and also Library Keeper 1730-38. Mercier's delicate and flattering style of portraiture is best exemplified by the contemporary description of Princess Anne as "…fat, short and disfigured by smallpox" which is far removed from the way the artist portrayed her.

A fine Court painting from this period which shows the continental lightness of touch making serious incursions into the more established style of portraiture is "The Music Party" which depicts the Prince and Princess Royal with his sisters Amelia and Caroline as musicians in the garden of Kew with the Dutch House beyond. This emerging style was partly as a result the new informality permeating society but the Price's endorsement gave it significant credence. Frederick's enthusiasm for this new approach can partly be attributed to the dissonance between the King and his eldest son. The latter was ill-suited to very much apart from an appreciation of the arts and he made a conspicuous effort to do everything at variance form how his father would approach things. The Music Party was also a subtle satire as Frederick's sisters were instructed by their father not to talk to him.

Mercier's style developed through clearly defined stages: the engravings and pastiches of Watteau, the conversation piece, which was virtually an Anglicisation of the Fête Galante, the court painter portraits and other commissions for Frederick, Prince of Wales, the first of the Hanoverians to declare a taste in the arts, and finally the fancy pictures and portraits produced in some quantity for provincial patrons. Stylistically, the development was gradual from the delicate rococo-fantasy of Watteau towards a more substantial, middle-class interpretation of Chardin. In London, Mercier began by competing with Scotin and Ravenet and ended by contending with Hudson.

Towards the end of the 1720s, the fashion for Conversation Piece paintings found favour in England. These were already known in the 17th century in the Netherlands, and in France in the early 18th and the format was for a family group or an assemblage of friends or colleagues, to be represented in their homes or gardens with the figures comparatively small in the surrounding setting. These are not traditionally aristocratic portraits and the middle classes, with their more natural manners which had begun to pervade society, became keen to have their portraits painted with their large families. The aristocracy did take to this new mode however and Mercier's "Viscount Tyrconnel and his Family" in the Belton House collection, is credited as being the first Conversation Piece painting in England, albeit painted in a strongly influenced French manner.

Mercier had established a portrait painting business in Covent Garden which was well supported by his close connections to the Huguenot émigré community and so when he fell out of favour at court, he continued with wealthy patrons and developed the "fancy" picture style. This meant that the artist could play with his subject matter, sometimes depicting actual portraits but at other times the figures were objects of the painter's fancy. In 1737, Vertue, writing in the journal of the Walpole Society wrote that "…pieces of some figures of conversation as big as the life: conceited plaisant Fancies and habits: mixed modes really well done - and much approved of". They were designed to please rather than be of social or historical significance and probably also intended to be turned into profitable engravings. This style of painting was taken up subsequently by Thomas Gainsborough and Henry Morland.

By 1740, Mercier had relocated to York where he concentrated more on full-length portraits of the local gentry. This was a good business for him as the racing season there was well patronised and the receptions and balls during the season at the Palladian style Grand Assembly Rooms in York were glittering affairs. He also received commissions in Scotland in 1750 and Ireland in 1747 but in 1751 he returned to London where he found the competition from the new generation of portrait painters rather too much to contend with so concentrated on his fancy pictures, some of which he exhibited in the Society of Artists up until his death on 18th July 1760.

In 1720 Merciers arrival in London could have been expected on at least three counts. He was a Huguenot, an initiate of the Court at Hanover, and informed on French taste. In the parish of St Annes, Soho, where he first settled, three-fifths of the population was French, many of them fine craftsmen, particularly in the silk weaving trade. This district of London was then known as the French Quarter. The House of Hanover had occupied the English throne since 1714 in the person of George I, a German speaking democratic monarch of little taste but of a stable, unimaginative character. In 1727 George II, who could boast some English, succeeded to the throne; one of his few known comments was I hate bainting and boetry both. Though an artist from Hanover was, therefore, politically welcome, he need not have expected thereby much patronage, indeed Huguenot loyalties might have proved much more useful. After the Treaty of Utrecht had concluded the wars of the Spanish Succession in 1713, French ideas and fashions came increasingly into this country, to cease only with the political unrest which led to the Seven Years War in 1756. Though it never took fundamental roots, this French influence centred ultimately on Watteau, and the growth of French taste - the subject of the 1968 Kenwood exhibition - were considerable spurs to English artists at a time when they were struggling to assert themselves and Mercier was an important figure in the introduction of French taste to England.

He had a son, also called Philip, and a daughter Charlotte, both of whom were also painters. The former worked between 1779 and 1793 exhibiting a painting at the Royal Academy, "A View of Richmond". Charlotte was a subject-painter whose "Four Ages" was engraved by Ravenet.