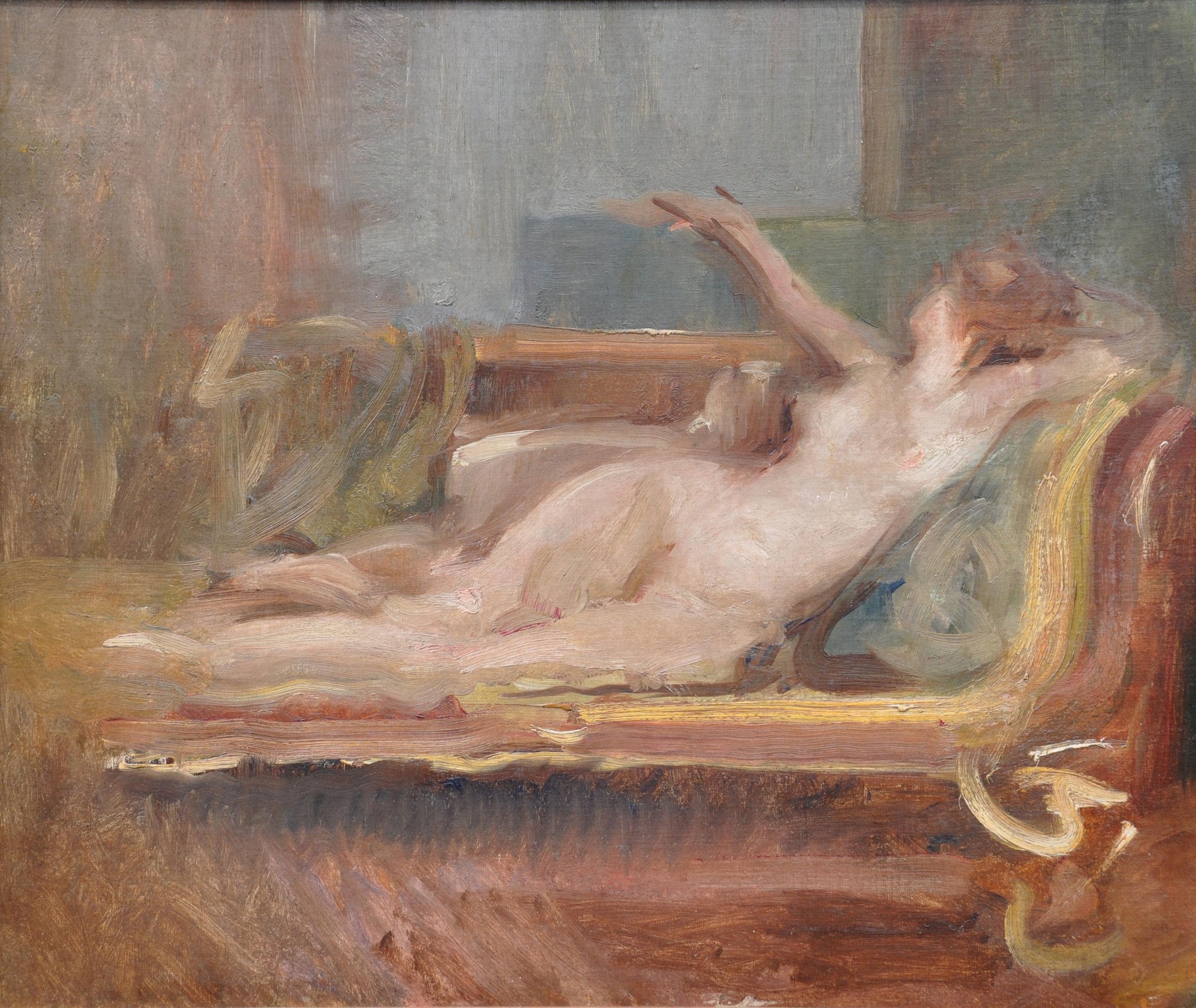 Oil on canvas, inscribed and numbered 11 on reverse on original canvas

Albert de Belleroche was born in Swansea on 22nd October 1864 although he was of French Huguenot descent and inherited his father's title on the latter's death. His artistic career saw him produce paintings of portraits, still-life and landscapes as well as being a lithographer.

He undertook his artistic training in Paris under the instruction of the painter and sculptor Emile Auguste Carolus-Duran and exhibited his first work, a self portrait, at the Paris Salon de la Société Nationale des Beaux-Arts in 1887. He remained in Paris until his marriage in 1911 and at one time shared a studio there with John Singer Sargent with whom he was very friendly. Other influential people from the art and literary world whom he could call friends included Renoir, Emile Zola, Oscar Wilde and Toulouse-Lautrec. In fact, one of the latter's models, Lilli, became de Belleroche's lover for over ten years and when Albert eventually married Julie Visseaux, who was seventeen years his junior, the reason that the newly weds left Paris was because Lilli threatened to destroy their marriage.

Until that situation arose however, he continued to exhibit at Parisian institutions until 1932, living and working at addresses in Rue d'Amsterdam and Rue de Bruxelles. Exhibition venues also included Le Salon des Artistes Français - where he received an honourable mention in 1890 - Le Salon des Indépendants and Le Salon d'Automne. He also exhibited in Vienna in 1902 and 1903 and had started to show his work at the New English Art Club in London from 1894.

Following his marriage and departure from Paris, de Belleroche moved to London and lived in Hampstead from 1911 to 1918 before moving to The Manor House in Rustington, Sussex, where he remained until 1940. He became close friends with the major painter and print maker Sir Frank Brangwyn who lived close by in Ditchling.

His son, William, 1912-1969, who became known as Count Willie, was a bohemian who was also a painter, print maker and a collector and lived the majority of his life in Sussex in and around Brighton. He had established a significant collection of the work of Sir Frank Brangwyn and wrote two books abut him: "Brangwyn's Pilgrimage" and "Brangwyn's Talks".

Albert spent the last four years of his life in Southwell, Nottinghamshire and died there on 14th July 1944. The Tate Gallery has a number of his works in its collection.

Artist's in Britain since 1945 - David Buckman

Oil on canvas, inscribed and numbered 11 on reverse on original canvas