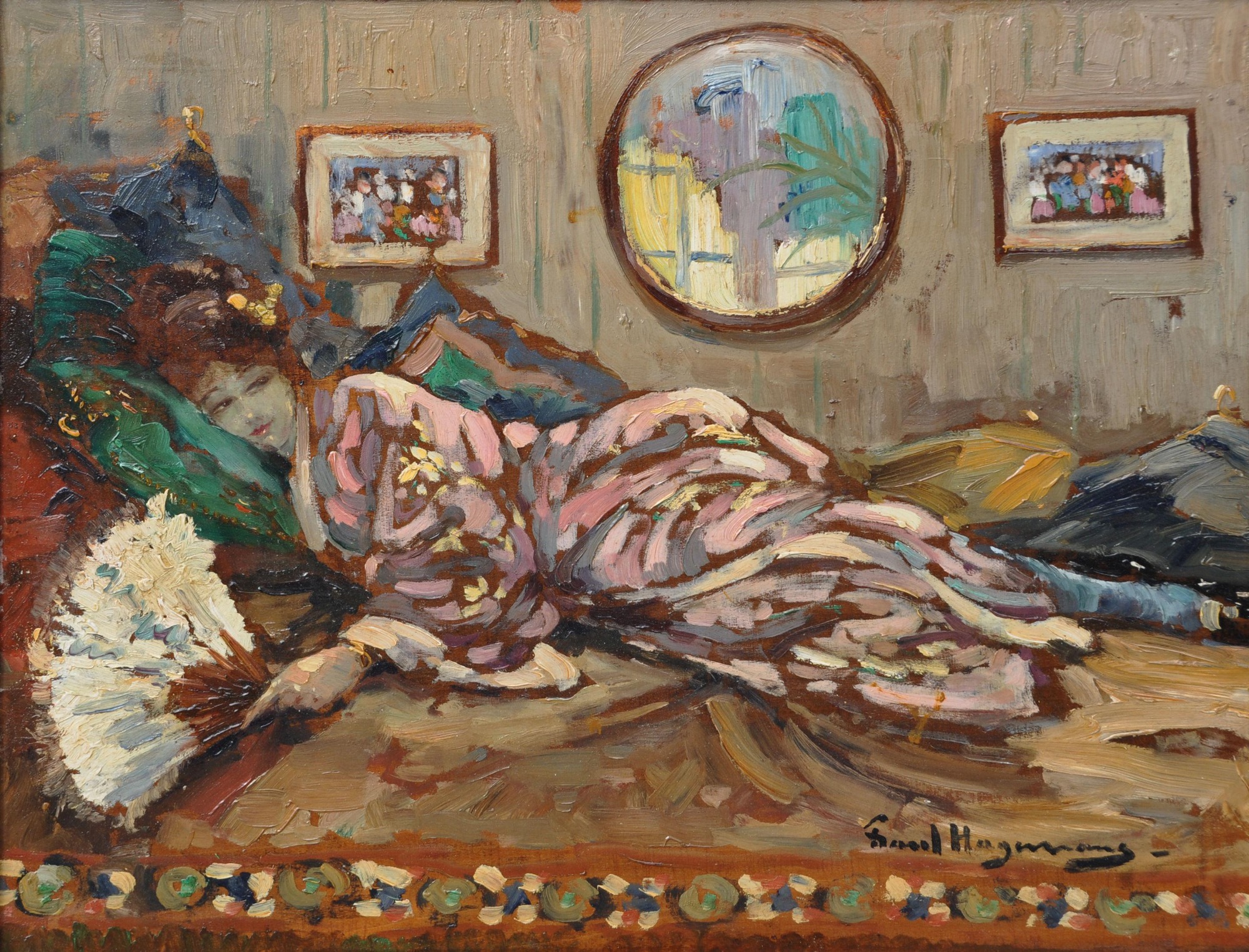 Oil on panel, signed and signed on reverse

Paul Hagemans was a painter of a broad range of subject matter who was born in Antwerp on 6th December 1884, the son of the self-taught painter Maurice Hagemans. He studied art at l'Académie de Bruxelles under the instruction of the poster designer, pastelist, designer and artist Herman Richir and the figure and portrait painter Isidore Verheyden from 1899 to 1906.

He produced portraits, genre scenes, historical and religious subjects, figures, landscapes and village and town scenes done with a generously laden paint brush and in a luminist style where there is a distinct fascination with atmospheric perspective and the effects of light, particularly on water. This light-saturated effect is apparent in Impressionist and Post-Impressionist painting.

The majority of his landscape paintings depict the Ardennes region and the Kempen and his figures and portraits share some of the traits of painters such as Georges Lemmers or Fernand Toussaint.

Apart from his painting, Hagemans was equally productive with engraving, theatrical decorative work, stained glass design and mural painting. Some of his stained glass designs were installed in the Cathedral in Port-au-Prince in Haiti. He was also commissioned to produce illustrations for prestige magazines and publications such as "Ameublement Bruxellois", "L'Art Belge" and "Lustrerie d'Art" among others.

He was an exhibitor at L'Exposition de Bruxelles in 1910 and his work, particularly between the Wars, falls into the category which included such notable painters as Fernand Toussaint, George Lemmers and Gustave Max Stevens who produced attractive scenes often depicting people of means who were interested in the arts and enjoyed an elegant lifestyle.

A critic wrote of him at the time: "The exceptional quality, the tenderness combined with vivacious colour, confers on the canvases of Paul Hagemans a kind of intimate eloquence, a seductive power which is one of confidence. He tackles many genres, and subjects but it is in when confronted by nature that he demonstrates his full ability. His landscapes count among those who have the most authenticity, the most intensity, a lightness in the atmosphere, transparency of the light, the vibration of the sun across foliage, the opacity of the shadows."

signed and signed on reverse