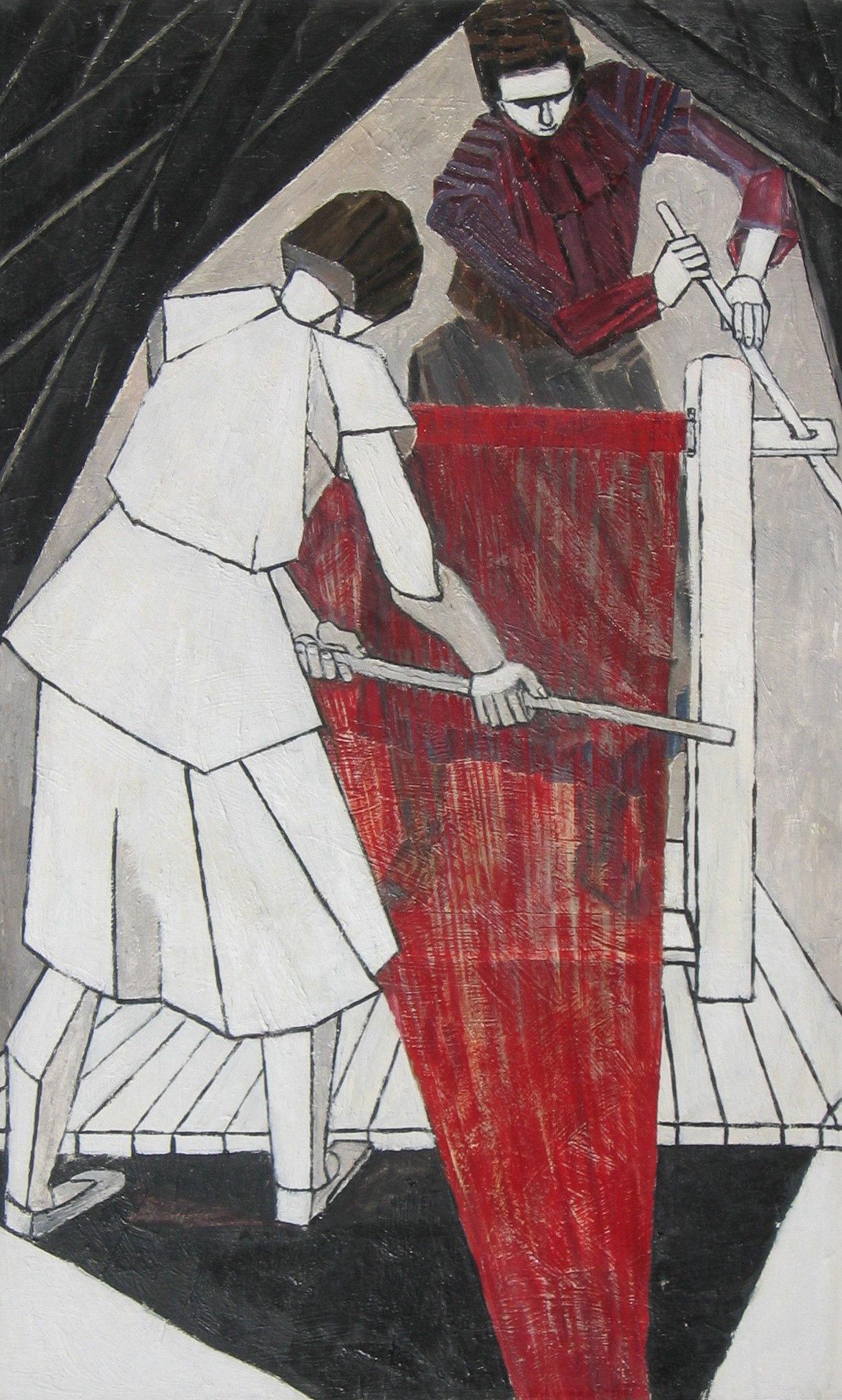 Rachel Reckitt was an interesting and individual artist who achieved success and renown in oil and watercolour painting, woodcuts and sculpture in several different media.

She was born in St Albans but her family moved to Golsoncott, a large Lutyens style Edwardian house in Roadwater, west Somerset in 1922.This house was vividly described by Reckitt's niece, Penelope Lively, in her book "A House Unlocked". Reckitt remained there all her life and it was both her home and her studio.

She undertook her initial artistic training under the well-known landscape painter, Alexander Carruthers Gould who lived in Porlock, and then went on to the Grosvenor School of Modern Art in the late 1930's under the tutelage of the painter and engraver Iain McNab, principally learning wood engraving techniques. This school was visited by Mark Gertler and Graham Sutherland who both influenced the young Rachel Reckitt. She also attended Hammersmith School of Building Crafts from 1940 to 1945 and studied lithography at the Central School of Art and Design.

Golsoncott and the Somerset countryside were a fundamental part of her life although she travelled to London and visited Europe in the course of her artistic career. Although from a comparatively privileged background which gave her the financial independence that allowed her to pursue her own artistic direction rather than compromising herself to satisfy a less discerning public, she lived an austere existence at home. She was an avid horsewoman and loved to hunt with hounds, she raised bullocks and drove a rather dilapidated Landrover; she showed no interest in fashion or comfortable surroundings and despite her background, remained an ardent socialist all her life. During the War, she did voluntary work in London's East End helping families displaced by the Blitz and several Londoners were accommodated at Golsoncott.

Apart from her work in printmaking and paint, Reckitt showed a keen interest in sculpture, working in steel, tin, aluminium and stone. Initially her preferred medium was stone and she made some tombstones for local churches as well as her figurative work. By the late 60's, her enthusiasm for metal drew her to blacksmiths and their forges, Harry and Jim Horrobin's smithy in Roadwater in particular. Initially she had drawn and painted them but graduated to actually working herself with steel at an anvil at Horrobin's between 1970 and 75. She was a member of the British Artists Blacksmiths' Association and some of her earliest work was pub signs for local inns. One freestanding example was produced in the 1930's for the Blackbird Inn in West Buckland and was of two panels at right angles to each other with one face showing a blackbird with eggs in a nest and the other with chicks. It was constructed from sheet metal, pipes, wire and wood relief. Commissions for local churches were also undertaken: the Chapel of St Bartholomew at Rodhuish has a sculpture depicting Jacob Wrestling with the Angel and St Andrew's in Old Cleeve has a screen. She sponsored the Rachel Reckitt Sculpture Award.

Reckitt illustrated several books with her wood engravings including: " Voices on the Green" by A R J Wise and R A Smith 1945, "London South of the River" by Sam Price Myers" and "English Country Short Stories" by Walter de la Mare in 1949, "People with Six Legs" by M Bosanquet 1953 and "Seven Psalms" 1981.

She exhibited at the Society of Women Artists, the New English Art Club, the London Group, the Society of Wood Engravers and the Cooling, Westheim and Redfern Galleries in London and the Bridgwater Arts Centre in Somerset. In 2001, the Somerset County Museum held a retrospective, "Rachel Reckitt: Where Everything Meets the Eye." Titles of exhibited works include: "The Farm, Roadwater", "Point to Point" and "Combe Sydenham Agricultural Show".

She was elected a Member of the Society of Wood Engravers in 1950 and was an Honorary Member of the Somerset Guild of Craftsmen. Public institutions that hold her works include: Salford, Bridgwater, Withycombe, Old Cleeve and Leighland.

The Dictionary of British Artists - J. Johnson and A. Greutzner

Artists in Britain since 1945 - David Buckman