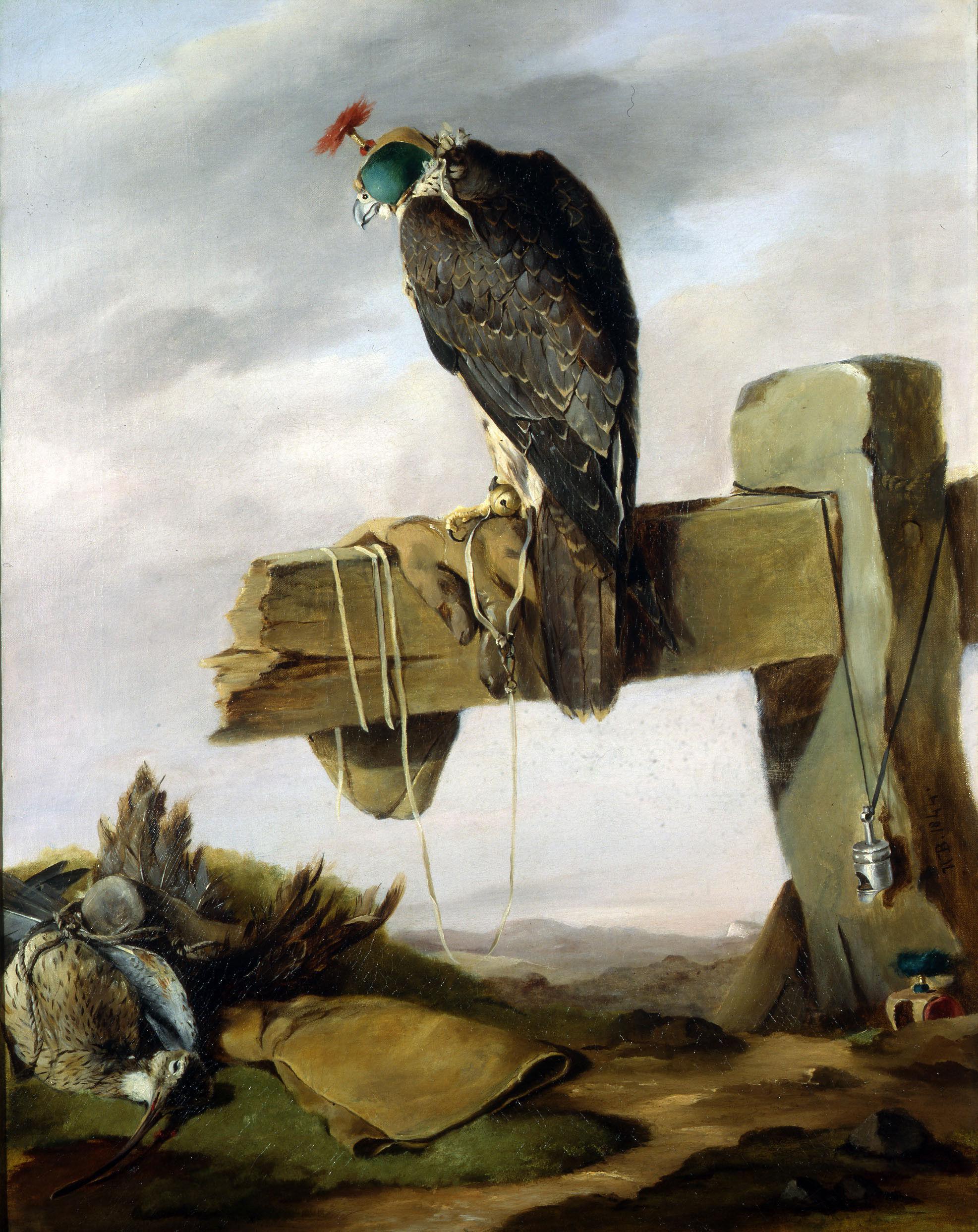 Oil on canvas, signed with initials and dated 1844

William Brodrick was the son of an eminent barrister living in Gower Street, London, who had a practice at the Old Bailey as well as other London Courts and the home circuit of Essex, Hertford and Middlesex. His maternal uncle was the renowned ornithologist P J Selby of Twizell House, Northumberland.

He was educated at Harrow and University College, Oxford but he later said of his school days that “…all I learned at Harrow was how to catch birds”. He gained a BA from Oxford in 1836 and then went to Edinburgh University to study medicine but it seems that he never practiced in this profession after completion of his studies as his lifelong passion for natural history held sway.

After he was married, he moved to Belford in Northumberland, living near to his uncle who imbued in William the passion for falconry on the moors. In those early days, Brodrick procured, trained and used very successfully many fine eyess falcons and tiercels as well as peregrines from the northern coasts, notably one from St. Abb’s Head, Berwickshire. He was financially well off and did not really need to work and thus was able to concentrate on this great passion.

When he later moved down to the south of England, firstly in Bath and later in Ilfracombe, he procured peregrines from Lundy Island which was known as a treasure trove of a source for this wonderful bird and had been since the Middle Ages. When he moved to his final home in Chudleigh, Devon, the topography was wholly unsuitable for the sport of falconry so he had to content himself with keeping his extensive collection of working birds as pets. This collection was remarkable, containing almost all of the raptors used in falconry at that time including the Norwegian, Greenland and Iceland sakers, gyr falcons and lanners. The only groups missing were the Indian shaheens and luggers.

Having had to relinquish his sporting pursuit, Brodrick was able to concentrate more on drawing and painting birds and his lifelong association and love of these birds meant that he was highly adept at portraying them in a naturalistic way. He understood the mechanics of their bodies, enhanced by his skill at taxidermy and, rather as Stubbs knew how horse bodies worked through many dissections, Brodrick’s intimate knowledge of their anatomy enabled him to accurately portray how their talons gripped a perch or prey and how they folded their wings.

It was not only birds of prey which he preserved and stuffed but also small birds of which canaries made up a large proportion. Indeed, so numerous were the cases of stuffed birds in his home that he had to lend some to Bath and Exeter Museums.

It is not as a result of his sporting prowess or taxidermy for which William Brodrick is such a renowned figure. It is for the remarkable illustrations in published books which were the most eminent of the time and are still revered today. The first, published in 1855, was “Falconry in the British Isles”, with the text by Captain Francis Henry Salvin, an old friend. The dedication at the beginning of the book reads: “To all those who love sport for its own sake, and in the pursuit of it are willing to tread in the footsteps of their forefathers”.

It was written of the illustrations that “… the figures of hawks are in their way inimitable and bear comparison with the best work of his friend and only rival in the same line, the accomplished animal painter Joseph Wolf.” There were chapters on the capture, taming, daily management, field training, diseases, implements and equipment for peregrines, gyr falcons, merlins, hobbies and sparrow hawks. The lithographs in the book were taken from the original very striking and well-observed watercolours and occasional oils that Brodrick had produced.

The volume was reprinted in 1875 by the original publisher, Mr van Voorst, but the original lithographic stones had been destroyed so Brodrick re-drew the plates and made some additions. Prior to this re-print though, the artist had produced another volume in 1875 titled “Falconers’ Favourites” which included life-size coloured portraits of  the famous tiercel Comet which emanated from Lundy, as well as Hurricane which apparently was the best Dutch passage falcon that he ever kept. It also contained other illustrations of goshawk, merlin, hobby and sparrowhawk.

He lived at Little Hill in Chudleigh, Devon and it was from here that he sent his one exhibited painting. It was entitled “In the Mews”, (mews being the rooms or cages where moulting hawks are kept) and was exhibited at the Royal Academy in 1881. In Mary Jones’s book “The History of Chudleigh, Devon; with a Description of the Surrounding Scenery, Seats, Families, etc.” published in1885, she writes “There are several pleasant villas, recently erected, near the town, to the east: Littlehill the residence of W. Brodrick, Esq…”

He was apparently a rather shy and retiring individual, consequently not widely known outside his particular field though held in very high regard by that fraternity. It was not until after his death that a large collection of superb drawings were found of British sea anemones and mollusks which showed both their external appearance and internal structure and had been executed using a microscope of high magnification.

When he died on 21st December 1888, Brodrick left an estate valued at £23,000, a significant amount at that time. His coffin was born by eight non-commissioned officers of the Chudleigh Volunteers, a body of which Brodrick had been commanding officer and several other members attended the funeral including the commander at the time, Colonel Lord Clifford.

In a contemporary newspaper obituary it was written that: “As one who by his published works and private enterprise has done perhaps more than any of his generation to popularise and encourage the art of falconry in England, the name of William Brodrick deserves to be remembered.” The obituary concludes with: “Here we lay down the pen, certain that the memory of William Brodrick will long be held dear by all those that had the advantage of knowing him, and that nothing would have pleased him better than to have known (as it is feared he did not know) how very highly his “Falconry in the British Isles” was esteemed by the falconers and naturalists who may happen to peruse these lines.”

Signed with initials and dated 1844