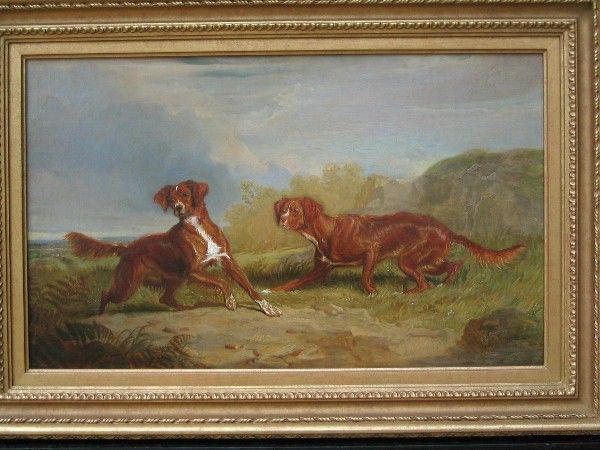 This sporting artist was the son of the engraver William Ward A.R.A (1766-1826), nephew of the major landscape and animal painter, James Ward R.A. (1769-1859) and brother of the print maker William James Ward. He studied art under Sir Edwin Landseer and his master's influence, together with that of his uncle - who also probably instructed him - can be seen in many of his paintings.

For some time he lived at the same address as his uncle in London but later moved to Shropshire for a period where he had a variety of patrons. He moved to York in about 1850 and sent his last exhibited painting from there in 1858. Ward spent the remainder of his life living as a recluse in that city and it is said that he never left there during that period until his death and, indeed, seldom to have left his room. He died a pauper who, despite his considerable ability as a painter, was almost forgotten by the art world. However, the people of York had not lost interest in him and his paintings were still held in renown and they raised the funds to provide a decent burial for him.

Martin Theodore Ward, who was better known as just Theodore during his lifetime, mainly painted portraits of dogs and horses and the dogs in his paintings always display a vitality. He exhibited 16 paintings at the Royal Academy, 18 at the British Institute and 5 at the Royal Society of British Artists in Suffolk Street with such titles as "Returning from Shooting," "A Study of Pointers," "Portrait of a Favourite Hunter; the Property of Captain Bayard," "Portrait of Horace, a Corsican Greyhound, the property of E. Tunno, Esq.," "Portrait of Frisk, a favourite Spaniel, the property of Lady Charlotte Denys" and "A Terrier; the Property of a Gentleman."

One of his paintings of a pointer was engraved and published in 1831 and the Harris Museum and Art Gallery in Preston and the Museums of York and Sheffield have paintings by him in their collections.