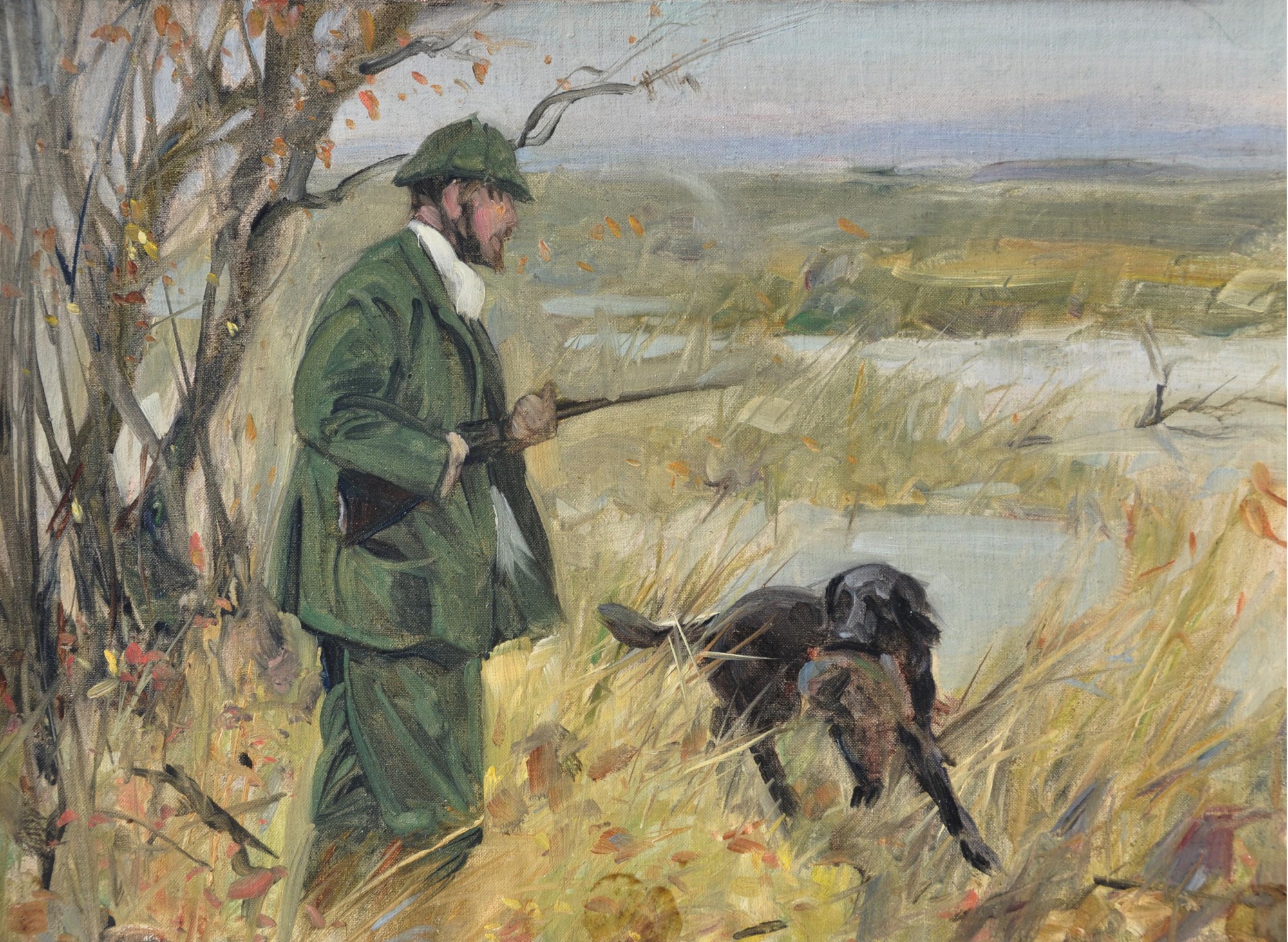 G D Armour was a painter and illustrator in oil, watercolour, pen and ink and pastel and was "…one of the outstanding artists of his period".

He was born in Waterside, Lanarkshire on 30th January 1864 but spent his early life in Liverpool before going to Fife to be educated followed by university at St Andrews, and his father, an enthusiastic member of the Lanark and Renfrewshire Hunt, was a cotton broker. Although he was destined to inherit his father's interest, his calling lay with art and consequently he studied at the Edinburgh School of Art and the Royal Scottish Academy from 1880 to about 1888.

During his time at the RSA, where he won most of the available prizes, he met the leading animal painter Robert Alexander who became a significant influence of the young painter and also a friend. The two of them travelled to Tangier to paint and hunt and also purchase horses

Initially, he began his career with oil paintings of animal life - which he had started to show at Scottish exhibitions in the latter half of the 1880's - which were deemed to be amongst the most promising works of their type. Some of these paintings were narrative works with a painting such as "Sympathy" which portrays a small dog watching a terrier with a bandaged leg, while others such as "The Lion's Den" were more serious animal studies and still others were of a humorous nature, a genre of painting which he developed and for which he is best known today.

He left Scotland in 1888, going to London to work as a painter and illustrator and it was there that he became increasingly influenced by the artist Joseph Crawhall whom he had met and befriended on another trip to Tangiers. Crawhall was a highly accomplished observer and painter of animals, whose work represented the break from the Victorian tradition of painting. Armour developed a similar clarity of drawing which enhanced the expressiveness of his work but he "…in the economical and expressive use of line…evolved a very charming manner of his own, instinct with subtly suggested or realised form of character, full of character, full of action, and very pleasing in the delicate sweep and finish…" (Caw).

Through his work for Punch, the Daily Graphic, Tatler and others, Armour's reputation increased with his depiction of horses, racing, hunting, fishing and shooting, the majority imbued with an amusing nature which appealed to the English character and transcended social classes. The pursuit of these field-sports was often portrayed in wet and muddy conditions which added to their appeal. Linen was often the medium for his colour pictures which suited his subtlety and these were utilised in books such as two volumes of "Thoughts on Hunting" by Jorrocks and Beckford.

Armour was a fine horseman and had a parallel career as a horse dealer and from his initial forays into this market in Tangiers, became a regular buyer at Tattersall's where he concentrated on cheap horses with the intent of "sorting out" their problems. Crawhall and he ran a stud in Hertfordshire for a couple of years. The former was also best man at Armour's marriage to Mary Emma Robb in 1898 and the couple initially resided in Chertsey but moved to Etchilhampton near Devizes in Wiltshire after three years where he hunted with the Beaufort and later with the Sparkford Vale Harriers and the South Berks. He always carried a sketch book with him while hunting and often took to making rapid sketches from life. He converted one half of his studio into a stable so as to always have an horse as a reference point

In 1910 he went to the Spanish Riding School in Vienna and also elsewhere in Austria-Hungary to study military horse procedures, producing a great number of sketches. In 1913, on behalf of Country Life, he travelled to New York and Long Island, to cover the International Polo Tournament and the following year he went to France to study hounds and visit Saumur. With the outbreak of the First World War in 1914, he joined the Remount Stables near Southampton. Later during the war, he went to Rouen and also to the Macedonian front and it was for this, his period commanding the depot of the Army Remount Service in Salonika between 1917 and 1919, that he was appointed OBE in 1919.

.His first wife died in 1924 and Armour married Violet Burton in 1926 and they continued to live at addresses in Dorset and Wiltshire until his death on 17th February 1949.

During his life, apart from his contributions to various publications, Armour exhibited extensively with 66 works at the Fine Art Society, 218 at the Leicester Gallery, 63 at the Royal Scottish Academy, 16 at the Royal Academy as well as at other venues and institutions in England and Scotland. He also produced a number of commissioned equestrian portraits such as: "Sir Lionel Durell", "Captain Gerald Digby" and "Dowager Duchess of Beaufort". Examples of his work are held in the collections of Punch magazine, Glasgow Museum and the Victoria and Albert Museum.

The Dictionary of British Artists - J Johnson and A Greutzner