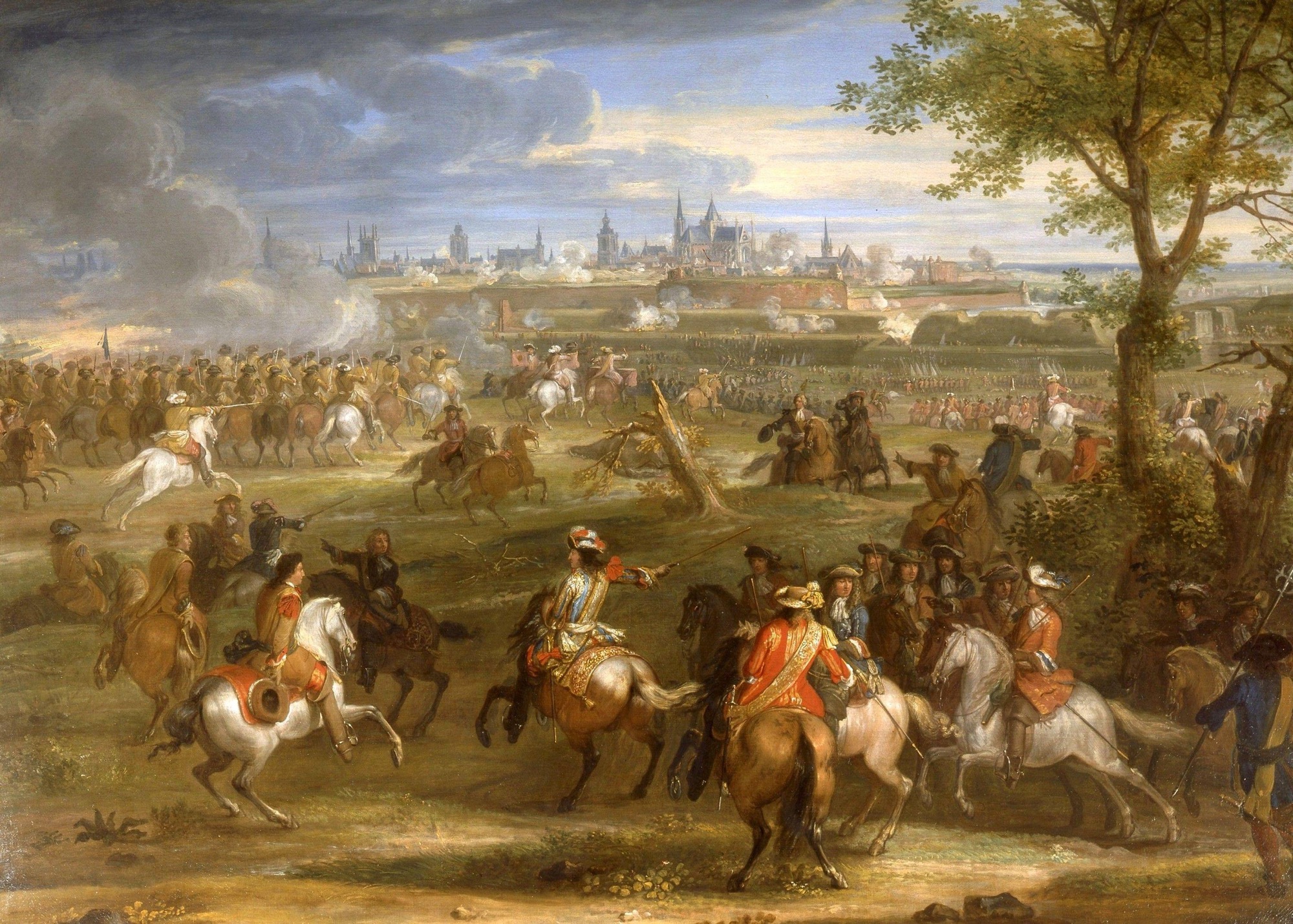 A painter of battle scenes, landscapes and genre, Adam Frans van der Meulen was baptised in Brussels on 11th January 1632 and did his artistic apprenticeship under Pieter Snayers, 1592-1666, a painter of hunting and battle scenes. By 18th May 1648, aged sixteen, van der Meulen had become master in the local guild and in 1653, his younger brother Pieter had become his apprentice.

In 1664 he settled in Paris where he collaborated with the important French history painter Charles Lebrun who had begun a major series of tapestries in 1662 depicting "The Story of the King". Van der Meulen produced a hundred preparatory drawings for this series and the ensuing sketches and the large-scale paintings for royal palaces earned him enormous success at court establishing the career for which he is principally remembered.

He married a relative of Lebrun who became his third wife and also collaborated with his step-brother and Brussels landscape painter Adriaen Frans Boudewijns, who had gone to Paris in 1669 to work at the Gobelins tapestry firm painting cartoons.

Van der Meulen returned to Brussels and in 1673 became a member of the Academy where he was recorded as "Peintre des Conquêtes du Roi" and in 1674 he took on Sauveur Le Comte and Jean Baptiste Martin (later known as Martin des Batailles) as his pupils.

Louis XIV loved the ideal of warfare and the conquest of Flanders was compared to a ceremonial march. He took his Queen, his whole Court and his mistresses on campaign with him and enjoyed supervising the leisurely and dignified sieges which were the fahionable mode of waging war. Van der Meulen was in the service of King Louis XIV and often accompanied him on these historic campaigns, recording cavalry engagements and sieges. However, more often he visited the sites after the action had ended and the main body of troops had left. The result of this is that his military campaign paintings are topographically accurate with great attention to detail whereas the depiction of the actual conflict and attendant military events is not always quite so correct. His method of recording a particular site was to execute very precise drawings of the relevant landscape and city on different sheets of paper which he would later re-assemble into large horizontal compositions measuring 220 cms in width. Upon his return to Paris, he would use these drawings to create sketches which in turn formed the basis for the finished large scale paintings. The sketches were then often used by tapestry manufacturers, such as Gobelins for whom van der Meulen often worked, to form the basis for the large woven works which were much in demand at that time.

The finished paintings were then copied by the artist himself or his studio of collaborators so that other royal castles could have a record of the King's exploits. In addition to J B Martin and Sauveur Le Comte mentioned above, Dominicus Nollet, P Scotin and an artist recorded only as Everts worked in his studio and often utilised their master's signature on paintings that they had copied. Other copies were sold to private collectors and the paintings were seen by an even wider audience because many were turned into prints by engravers such as A F Boudewijns, J A van Huchtenburg and R F Bonnart.

Van der Meulen occasionally painted, sometimes with and sometimes without his pupils, large decorative paintings of processions and receptions. He also collaborated with the important Flemish landscape painter Jacques d'Arthois contributing colourful, elegant mounted figures and the latter's landscape style can sometimes be discerned in van der Meulen's landscapes. His panoramic Brabant landscapes which were meticulous in their topographical detail, became a significant influence on French painting and spawned imitators such as Jean Paul, R Bonnard, Pierre Scotin, Henri Testelin and Sylvain Bonnet.

Unlike his own master Pieter Snayers, van der Meulen was not interested in showing the violent aspect of 17th century warfare but endeavoured to give an accurate record of the King and his suite to produce a spectacular and decorative effect.

This painting is based on a further example by van der Meulen of the same subject from the cycle of paintings known as the Conqutes du Roi painted for Louis XIV. A number of different treatments of the same subject are known and mostly housed in the Musee nationale de Versailles et Trianon. The subject's popularity and constantly changing compositions underlines the event as a key turning point in the Franco-Dutch war.

The siege of Valencieenes took part towards the end of the Franco-Dutch war, waged by Louis XIV on the United Provinces in 1672. Soon after the decisive French victory at Valenciennes, a war-ravaged Europe entered into negotiations which resulted in the Treaty of Nijmegen in 1678. Valenciennes remained in French hands and was fortified by leading military engineer Sebastien Le Prestre, also known as the Seigneur de Vaubon, to become one of the main strongholds of Northern France.

In this canvas, as with the others the King is depicted as a military man fiercely engaged in the task at hand. Centrally place in the foreground he gestures authoritatively towards the beleagured city. His profile is unmistakeable and he wears the blue sash of the French Order du Saint-Esprit.