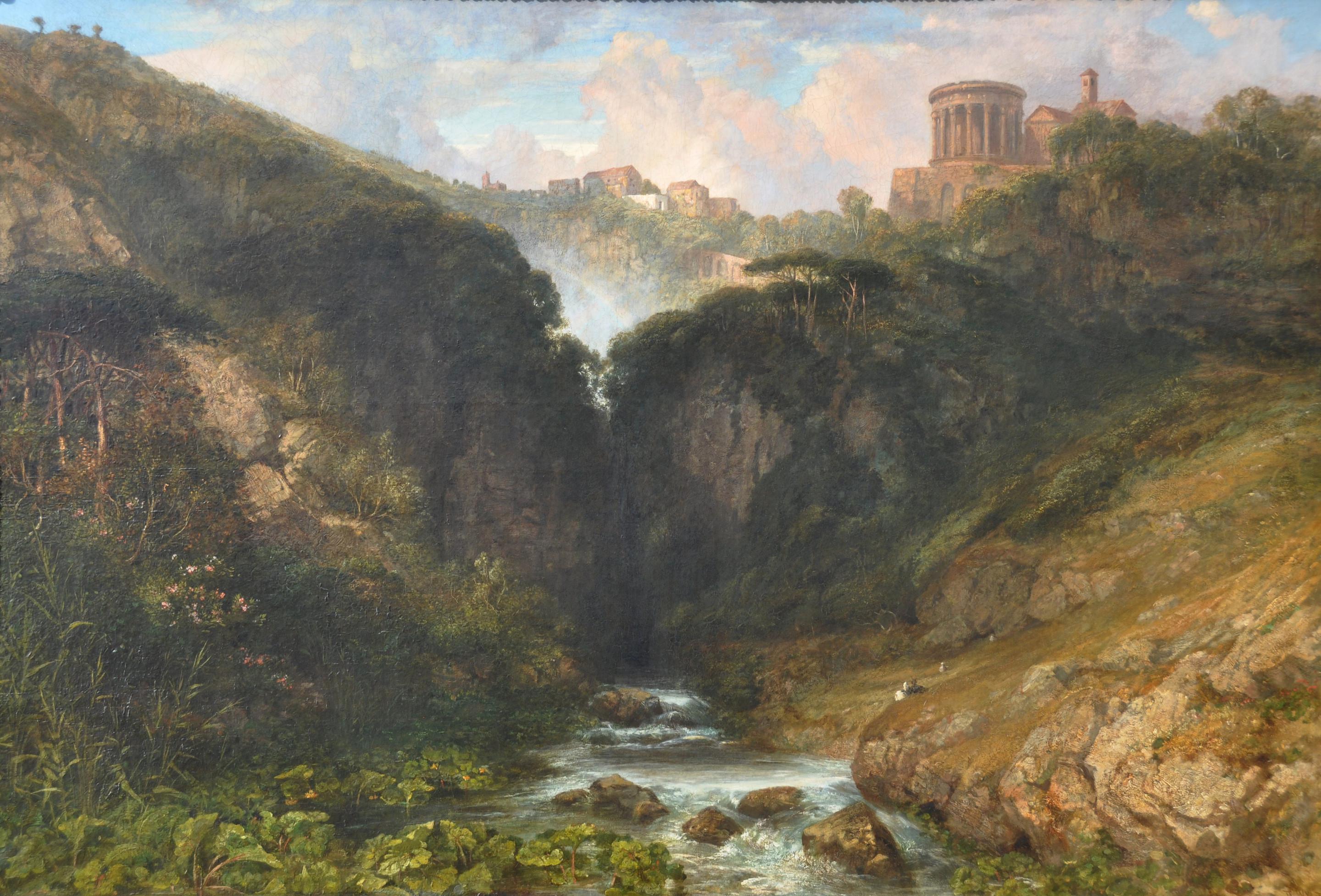 M H Grant, in his Dictionary of English Landscape Painters, writes of William Wyld that: "A notable painter who passed his life in Paris, where he influenced greatly the French artists around him."

Wyld was born to a family of comfortable means and influence having been well-to-do merchants for several generations. A young uncle, who had instilled an interest in painting in the child William, left his artist's materials to him upon his premature death. The six year old displayed a precocious and prodigious talent for drawing but it was clear that his family had a diplomatic service career in mind for him as he was sent to Calais in 1826 to become secretary to the British Consulate, working under Lord Granville.

The posting proved to be fortuitous for Wyld as he met there the French watercolourist and teacher of Richard Parkes Bonington, François Louis Thomas Francia. Francia, who had come to London as an émigré and had exhibited at the Royal Academy while he was resident there. Francia was a great admirer of the important English painter Thomas Girtin and agreed to take on Wyld as a pupil. However, what had initially seemed like having the best of both worlds for Wyld, came to an abrupt end when the statesman and family friend George Canning, who had secured the Calais posting for him, died in 1827.

It seemed as if Wyld would have to return to England but a merchant friend, who was a collector of Bonington's works, enabled Wyld to become involved in the champagne business exporting to England from Épernay. This tended to be a seasonal activity with long periods with little to do and Wyld travelled around northern France painting as he went and meeting the important painter Horace Vernet. This way of life continued until 1833 during which time he became very knowledgeable about wine but also made an important number of contacts with the French aristocracy.

One such contact who became a friend was the Baron de Vailar and Wyld travelled with him to Algiers where the Baron bought a house. Wyld was just about to leave after six months in the country when he heard that Vernet was on board a warship lying at anchor in the harbour which had stopped in the recently conquered country while on its way to Rome. Wyld managed to get aboard and was immediately recognised by Vernet who insisted that Wyld accompany him to Italy so that the latter could fulfil his ambition to become a painter. Vernet secured the young artist commissions from patrons that he knew and Wyld began to produce Orientalist paintings. He remained in Rome for six months before embarking on a journey through Italy on foot, sketching as he went, before returning to Paris where he established himself in a studio producing Venetian scenes and Orientalist paintings before winning a Médaille d'Or at the 1839 Paris Salon - his debut at this venue - for a large canvas of Venice at Sunset which further enhanced his growing reputation.

"Voyage Pittoresque dans la réence d'Alger" containing fifty lithographs by Wyld and E Lenore was published. In 1839, he also published "Monuments et Vues de Paris" which had twenty of his lithographs in it. In Paris, Wyld's subject matter and style was very close to Bonington's and he, like his mentor, played an important role in the development of watercolour painting in France.

In 1844 he travelled to Algeria and Egypt but he was back in France by 1845 as he was staying with the Comtesse de Tromelin in Brittany and with whom he developed a strong relationship, dedicating his painting "Chemin à Ploujean" to her. He continued to paint around France until the onset of the 1848 Revolution when he decided that it was wise to return to England. He was much sought after for commission work by the wealthy merchant class of Manchester and was also held in high regard by Queen Victoria who had first come across his work in 1843 when she was with her Aunt Louise, Queen of the Belgians, who had some Wyld watercolours in her collection. Following her visits to Liverpool and Manchester in 1851, Queen Victoria commissioned him to depict the cities. Both are still in the Royal Collection and "Manchester from Kersal Moor" is a renowned painting with its Claude-like rural foreground and a horizon of chimneys of the cotton mills billowing smoke.

The Queen invited him to stay at Balmoral in 1852 to paint the environs of her summer retreat. In a letter to a friend sent from Balmoral, Wyld wrote: "I am well and getting on very well with Her Majesty, who altho a Queen is one of the most amiable women I ever spoke to, and so completely does she put you at your ease that I am no more embarrassed in talking to her than to you."

Wyld returned to Paris to live and exhibit at the Salon and was there for Queen Victoria's state visit in 1855 which was the first by an English monarch since Henry VIII in 1520. To mark the occasion, he produced a monumental view of Le Château de Saint-Cloud. Comte Émilien de Nieuwerkerke, who was the equivalent of the French Government's Art's Minister, invited Wyld to show a work at Le Pavillon des Arts in the Paris Exposition of 1855 which had been set up in response to London's Great Exhibition of 1851 and attempted to surpass it. It was as a consequence of this that he was awarded the title of Chevalier de la Légion d'Honneur in 1855. He remained in Paris and continued to paint right up to his death on Christmas Day 1889.

Apart from a few exceptions, mostly scenes in Scotland, Wyld's oeuvre depicted scenes in Europe with France, Italy, Germany, Spain the main inspirations, together with the north and south Mediterranean seaboards. He exhibited in France but sent many of his works to England to be shown in the Royal Academy, British Institute and the New Watercolour Society. The majority of these paintings were watercolour but his large oils commanded high prices at the time. Apart from his Légion d'Honneur and the awarding of two medals at the Paris Salon, in England, he was a member of the New Watercolour Society in London and was also elected an Associate Member of the Royal Institute in 1849 and a full Member in 1879

THE TEMPLE OF VESTA, TIVOLI

Built in the first century BC, the Roman building known as the Temple of Vesta overlooks the falls of the Aniene. It bears an inscription on the architrave with the name of Lucius Gellius who is possibly the builder and it is in the Corinthian order. This temple surrounds a circular cella which is on a high travertine block-clad brick podium. Access to the cella is through a single door and it also has two windows. The ambulacrum that surrounds the cella originally had eighteen Corinthian columns but only ten remain standing and the frieze is decorated with bucrania and carved garlands.

Vesta was the Roman hearth goddess, the equivalent of the Greek Hestia and was associated with the fire burning on the hearth and consequently received worship in every Roman house. She was also the Roman national protectress and was believed to reside in an eternal flame which burnt in the temple to her in the Forum in Rome where she was attended by the six Vestal Virgins. However, the attribution to the dedication to Vesta for the building at Tivoli is partly based on the similarity of construction to the Roman Temple of Vesta . Other dedications for the Tivoli temple are also mooted such as Albunea, Tibernus and Hercules.

It was a popular building to study and imitate for the classically inspired architects such as Piranesi who made engravings of it and an accurate plan and perspective drawings were published in 1682 by Antoine Desgodetz. Sir John Soane also made drawings which he used in his lectures and the building provided the inspiration for the Temple of Solitude by William Chambers at Kew and Stowe's Temple of Ancient Virtue by William Kent. Elsewhere it provided the basis for La Temple de Sibylle in Le Parc des Buttes in Chaumont by Gabriel Davioud and La Temple d'Amour at Le Petit Trianon by Richard Mique. At Downhill in Northern Ireland, the 4th Earl of Bristol constructed the Mussenden Temple and so enamoured was he of the building that he wanted to purchase the original as well and bring it back to his home. He was only thwarted in this venture by the Pope himself.

It has remained in reasonably good condition compared to some other buildings dating from antiquity and this is largely due to it being utilised as a church when it was known as "Santa Maria della Rotonda". However, the Christian additions proved comparatively ephemeral and had disappeared by the end of the 16th century.