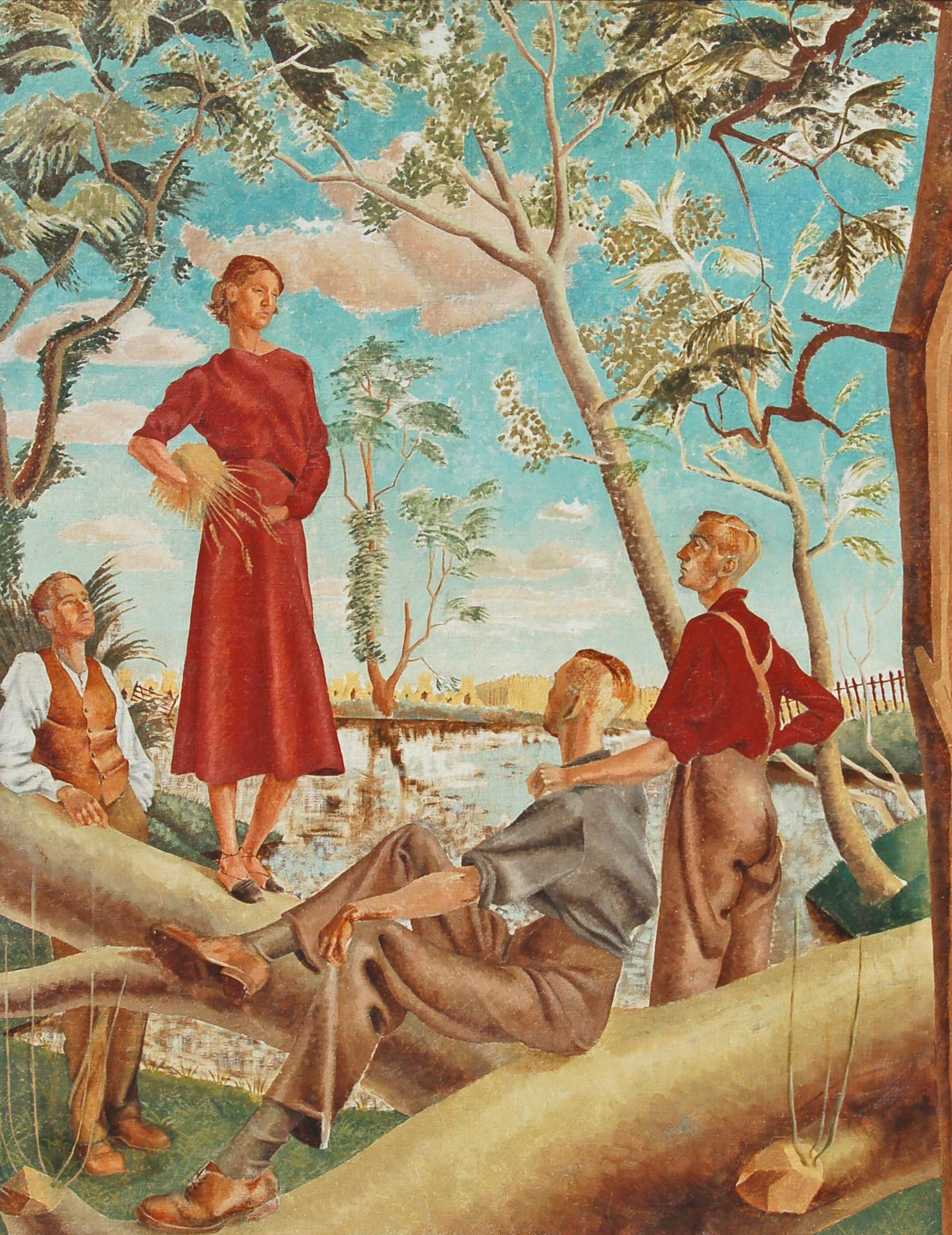 Provenance: By descent from the artist

Jan Buchanan was born into an artistic family in 1912 in Oxenbridge Farm, Iden in rural Kent. Her parents, Bertram and Kitty, were friends with the major 20th century British artists, John Piper and Paul Nash, both of whom were near neighbours to the Buchanans. She used to paint with Paul Nash as well as some of her parents' other friends which was an invaluable education for the aspirant artist.

In the autumn of 1929, Jan began her artistic training at Hastings School of Art, just over the county border in Sussex. In 1931, she obtained a place to study in the prestigious Slade School of Art in London and achieved her drawing certificate in 1933. It was there that she met her future husband, the painter Peter Brooker who was her drawing master.

She painted portraits, figure subjects, landscapes, marines and still-life in both oil and watercolour and exhibited her work between 1933 and 1938 at the Goupil Gallery and the New England Art Club, which were both in London. Titles of exhibited works include: "Portrait of the Artist's Mother", "A Torso", "Marine", "Still Life", "Tar Works" and "A Cactus".

This was obviously a very personal painting which she kept rather than selling. It was probably painted in about 1930 and almost certainly portrays one of her brothers who was a fighter pilot and later lost his life in World War II.

We are most grateful for the following that has been written for us by the artist's granddaughter, Helen Gunning-Stevenson (née Buchanan)

My grandmother, Janet Buchanan, attended Beadales School in Hampshire which was founded as a progressive alternative to the rigid schools of the late Victorian era. It is not surprising that her artistic father, Colonel Bertram Buchanan and her mother Kathleen Kitty, herself a founding member of the Romney Mash Weavers, chose this school for their only daughter. She boarded as her family was living at Oxenbridge farm, near Rye, in Sussex. Jan later attended art college in Hastings and then the Slade in London where she met teacher, Peter Brooker, whom she subsequently married. During the 1930s Jan studied and practiced art, exhibiting in a couple of London galleries. By 1936 she and my grandfather had moved to Thornsdale, the neighbouring property to Oxenbridge, which was also owned by her parents. Unfortunately the marriage did not last and Janet remarried after the War and she and her second husband moved to another family farm, in Dunwich, Suffolk.

My earliest memories of Gran Jan are when we visited St Helena, her beautiful home in Dunwich. She developed an extensive garden where she taught us archery and croquet, she also taught us how to make aeroplanes out of balsa wood and took us for long walks in the Dunwich forest. I cant remember ever seeing my grandmother paint. At some point, before the 1960s, she turned her artistic talent to pottery. I knew she had been a painter because she and my great grandmother, Kitty, had several of her works in their homes. Her pottery was beautiful; simple, functional pieces, mostly white with a blue striped pattern. She also experimented with an earthy palette of browns, greys and blacks. It was a great treat for us to spend time in her pottery, initially a large converted shed near the house and later a smart modern extension at the back of St Helena. She taught us to cut and handle the clay, to make shapes by hand and, once we had proved ourselves, to use the pottery wheel.

This painting is almost certainly a scene on Oxenbridge Farm. It looks as if it is where her mother, Kitty, developed a garden, across the yard from the house, overlooking a large pond and the fields beyond.

Provenance: By descent from the artist