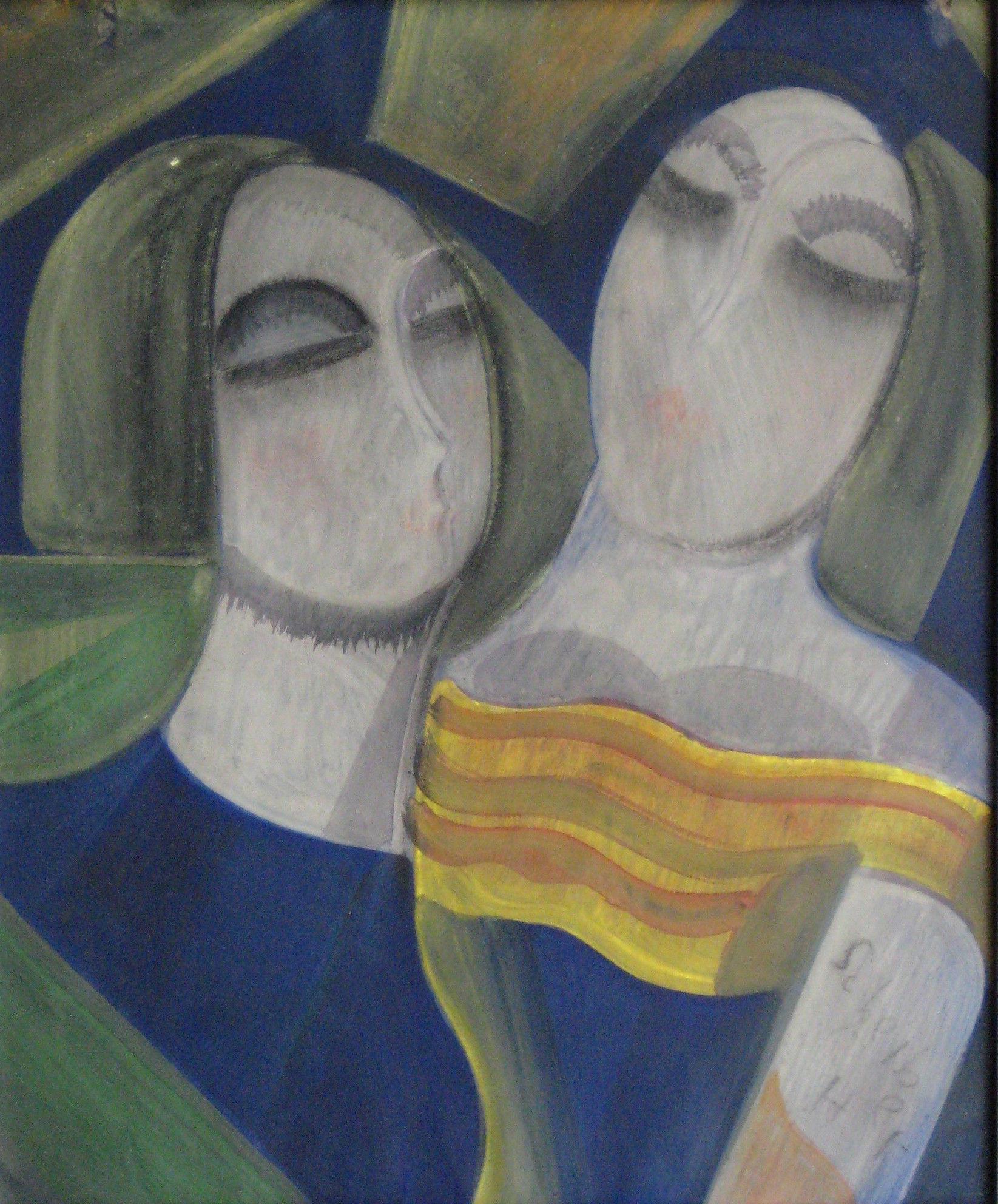 Hugo Scheiber was born in Budapest on 29th September 1873 but he spent his childhood in Vienna where his father was working in the Prater amusement park as a painter and decorator. In 1890, when he was seventeen, the Scheiber family returned to their native city and the young Hugo joined the army. It was in 1894, while serving, that he started to paint and on his release from the forces, he enrolled in the Academy of Applied Arts in Budapest where he studied from 1898 to 1900 under the instruction of Henrik Papp. His studies were undertaken in the evenings as he had to work during the day to help support his family.

Having completed his studies, Scheiber found employment as a sign painter, producing his own work in his spare time. Initially his preferred medium was chalk drawing but through experimentation and perseverance, taught himself to become proficient in oils.

German Expressionism and Futurism were his primary influences in the early stages of his career and he met Filippo Tomasso Marinetti in 1915 who invited him to join the Futurist movement. However this style of painting rather clashed with the more academic taste that prevailed in the Hungarian art establishment at that time and consequently his work was disregarded.

He also came under the influence of the Viennese Successionists and consequently moved there to find a more appreciative audience. In 1919, together with the artist Béla Kárdár, he staged an exhibition in the Hévesy Salon which was very successful, even to the extent that the Budapest Museum felt obliged to purchase two drawings by Scheiber.

A significant moment in his career arose when Herwath Walden, the founder of Der Sturm, Germany's foremost avant-garde magazine, became enamored of Scheiber's paintings in 1921 and with publication of some of his works in the periodical, recognition ensued.

The move to Germany was inevitable and this coincided with a significant exodus of Hungarian artists from Vienna to Berlin. There had been a major split in ideology among the Hungarian avant-garde. The Constructivist and Aktivist leader, Lajos Kassák (painted by Hugo Scheiber circa 1930) believed that art should relate to all the needs of contemporary humankind and modern art should reflect these needs and act as an impetus for social change. Thus he refused to compromise the purity of his style to reflect the demands of either the establishment or ardent socialists and communists. The other camp believed that an artist should be a figurehead for a particular ardent political party.

The fall out and factions that resulted from this politicisation resulted in most of the Hungarian avant-gardists leaving Vienna for Berlin. Hungarian émigrés made up one of the largest minority groups in the German capital and the influx of their painters had a significant effect on Hungarian and international art. Apart from the Aktivists, there were independent Modernists such as Scheiber and Kárdár, who hoped to find fertile ground for their aesthetic and socialist idealism. Berlin was a hotbed of international modernism at that time and the cross-pollination had a most beneficial influence, particularly on the Hungarians. Hugo Scheiber, among others, suddenly found himself in the upper echelons of the dynamic Berlin art world.

The Hungarian avant-garde movement became increasingly fragmented with the diaspora and although there was interest throughout Europe in their work, that time was difficult for most of them, in particular those who still tried to focus on a Hungarian market despite living in self-imposed exile. Scheiber and his friend Kadar, pursued an independent path and produced a very individual style of work that was an amalgamation of Constructivism, Futurism, Expressionism and Folk Art.

By 1923, even conservative Budapest had had to take notice of the involvement of their nationals in the European Modernist art movement and Scheiber was invited to exhibit his drawings at the House of Creative Artists there. The work was comprised of paintings almost like posters depicting drunks, tramps and male and female heads which represented contemporary urban life. These were executed in rapid, graceful lines.

His work was finding an increasingly international market with shows in Rome, La Paz and London but it was the New York exhibition of 1926 which gave his career a huge boost. This was organised by Katherine Dreier and was comprised of important avant-garde artists from twenty-three different countries under the umbrella title of Societé Anonyme: Modernism for America.

Marinetti invited Scheiber to participate in the great meeting of the Futrists held in Rome in 1933, and the latter was received with great enthusiasm. Gradually, as the perception of these Hungarian artists changed in their native country, they began to return home, particularly with the rise of Adolf Hitler. Kardar went back from Berlin in about 1932 and Scheiber followed in 1934. The latter died in Budapest on 7th March 1950.

Hugo Scheiber's work is in many private collections in Europe and the U.S.A and in the museums of: Pécs - Janus Pannonius, "Self Portrait with Cigar", Budapest - Hungarian Art Gallery, "Nudes" and Connecticut - Housatonic Museum of Art, "Portrait of a Woman" 1929.

S.A Mansbach - Modern Art in Eastern Europe from the Baltic to