A View from the North Bank of the Thames looking West towards Battersea with the Airmill, St. Mary's Church and Sir William Chambers' Chinese Pagoda at Kew Gard 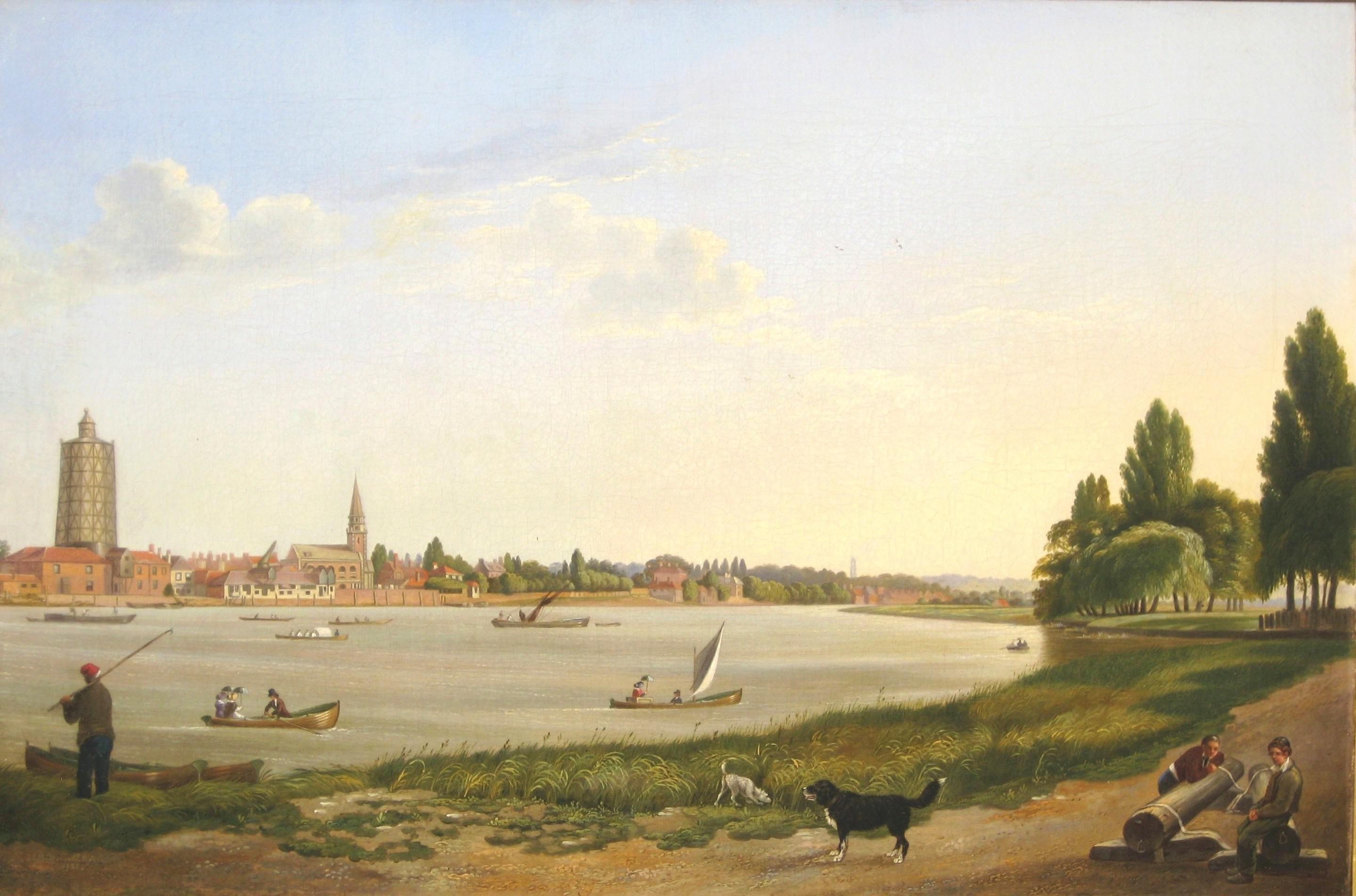 A View from the North Bank of the Thames looking West towards Battersea with the Airmill, St. Mary's Church and Sir William Chambers' Chinese Pagoda at Kew Gard

A View from the North Bank of the Thames looking West towards Battersea with the Airmill, St. Mary’s Church and Sir William Chambers’ Chinese Pagoda at Kew Gardens on the distant Horizon

A B van Worrell was a painter in oils and watercolours, as well as being a print maker, who was based both in Middleburg and London during his career. He had achieved honours in his art studies in Europe being awarded full membership of the Royal Academies of Holland and Belgium and this was a fact that he occasionally added after his signature on his work.

He came to London in 1820 and produced mainly Dutch views for the English market: landscapes with milkmaids by Frisian cows in strongly coloured landscapes rather in the manner of the Flemish Henri Joseph Antonissen and his fellow countrymen Leendert de Koningh, who also resided in England, and the earlier Jan van Gool. He translated this style to many of his English scenes with the consequence that these scenes seem slicker and more polished than had they been done by a native artist.

He moved to Newcastle in about 1840 and this move seems to have resulted in an increase in commissions and the commensurate financial reward. Paintings by him were shown at the London venues between 1820 and 1849 with eight at the Royal Academy, twenty-one at the British Institute and twenty-eight at the Royal Society of British Artists in Suffolk Street. Exhibited titles include: "Cattle with Dutch Milkmaid", "A Dutch Fair at Oasterland in South Beverland", "Fishermen and Women of Cullencoats in the County of Northumberland", "Cattle and Landscape, Wandsworth Old and New Church in the Distance", "Flower Piece", "Bell, a favourite Setter" and "The Giraffe, accompanied by his Keeper"

Examples of van Worrell's paintings are held in the Royal Collection "The Last Shooting Excursion of Frederick, Duke of York near Belvoir Castle" which was painted in 1827 and purchased by Edward VII; the British Museum, "Bull in a landscape" and "The Giraffe" and Colchester Museum "The Old Mill, Colchester".

What has become known as Battersea was recorded in the Domesday Book of 1078 as S. Peter of Westminster holds Patricesy. Battersea, or "Patrick's-eye", is said to have taken its name from St. Patrick or St. Peter because in times past it had belonged to the Abbey of St. Peter in Westminster. It also had a manor which had been granted to the Abbot and Convent of Westminster by King Stephen but the property reverted to the Crown at the Dissolution of the Monasteries. Following the Restoration, it was given to Sir Oliver St. John, eventually passing to Lord Spencer.

The manor house was a significant structure having forty rooms on a floor and was partially demolished in 1778. The part that remained standing was converted for residential purposes and it was on the site of the demolished section that an airmill and malt distillery was constructed in 1808. The mill was originally used for grinding linseed before adapting to malt and the design was taken from one similar but of smaller proportions in Margate. From base to the top it was one hundred and forty feet and in diameter it was fifty-four feet at the bottom and forty-five at the top. The outside was formed by ninety-six wooden shutters operating like Venetian blinds in that they could be opened and closed by a system of ropes. The "sails" of the apparatus were on the inside and it worked by having ninety-six perpendicular double planks, mirroring the external shutters, which formed a circular internal shaft. The regulated air passing through the external shutters then acted with extreme force upon the internal cylinder turning it at considerable speed which enabled the grinding of between six and ten pairs of stones. The spinning motion could be moderated or stopped very quickly by closing the vents.

In "Curiosities of London" by John Timbs, he notes that the old mill resembled an enormous packing-case and local legend had it that "when the Emperor of Russia was in England, he took a fancy to Battersea Church and determined to carry it off to Russia and had this large packing-case made for it; but as the inhabitants refused to let the Church be carried away, the case remained on the spot where it was deposited".

The structure of the ancient Battersea church is not known but is believed to have been a twin of the one opposite in Chelsea. A church, dedicated to St Mary, had stood on the site for centuries but the brick edifice was rebuilt in 1777 at a cost of £5,000. There was a low, solid looking octagonal spire on top of the tower containing a clock and eight bells.

The old part of Battersea was linked to the old part of Chelsea on the north side of the Thames at this time by an ancient wooded structure, probably built at the beginning of the seventeenth century and owned by the ferry company which it had supplanted. So rickety was this bridge that it was used with extreme trepidation until it was rebuilt sturdily enough to take carriages by 1772.

Sir William Chambers, 1726-1796, although of Scottish ancestry, was born in Stockholm but raised in England. He trained as an architect and found employment with the Swedish East India Company which resulted in him living for a while in China. While there, he took a keen interest in that country's architecture, sketching many buildings and upon his return to England, published "Designs of Chinese Buildings" in 1757.

Chinoiserie, a western interpretation of Chinese style, was very popular in the mid to late eighteenth century. Chambers had been appointed personal architect to Princess Augusta, mother of George III, who lived on her estate at Kew. Following the death of her husband, she had immersed herself in substantially re-landscaping the grounds. Follies were almost de rigeur in ornamental parks and gardens at this time and Chambers designed the Pagoda which was to be a focal point on the farthest reaches of the property. The structure was a Chinese style octagonal Pagoda with ten storeys, taking it to a height of just under 163 feet. There were two other buildings which flanked it: a Turkish mosque and a Moorish building known as the Alhambra.

The original drawing is in the collection of the Royal Institute of British Architects and shows that the roofs were to be covered in green and white tiles forming stripes and red, green and blue multi-coloured balustrades. However, when the building was completed in 1762, it was painted a deep, dark green with orange-red and cream. The roof corners were surmounted with eighty gold-winged dragons but these were removed at the same time as the original roof tiles in 1784.

Sir William Chambers is probably best remembered as the architect of Somerset House.